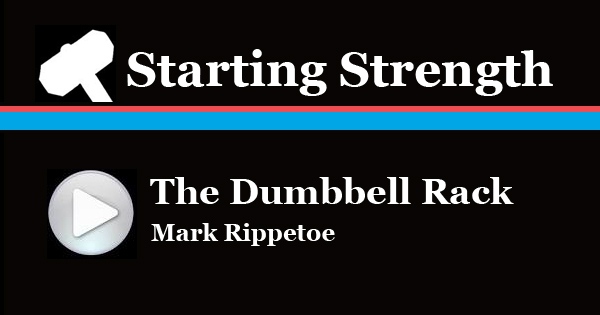 Construction = Bar Stock, Plates, Washers, Slop, Weld. Preservation = Do Not Drop the Dumbbells. Ever. At All. Use = Rack/Unrack, the Dumbbell Bench

In the video in the link above (see from 3:30 to 4:40), Mark Rippetoe makes an argument for the superiority of rotating dumbbells. He doesn’t go into specifics, but I’m assuming he’s claiming that snatching a fixed dumbbell will have some unwanted effect due to the entire dumbbell rotating 180° and only the rotating sleeve will change that much from ground to the overhead position using a free spinning dumbbell. Is there really be a benefit to using a dumbbell with a rotating sleeve?

I don’t know if there will be a benefit or not – that really depends on what you’re trying to do, I suppose. It will be a little easier to lift a dumbell with a rotating sleeve, as it takes some effort to rotate the weights (think about holding a dumbbell at a constant height, but rotating it, like the forearm/wrist exercise–takes effort to do, right?), but doesn’t seem like that much effort compared to lifting the weights from floor level to above your head.

Well, if the whole dumbbell rotates rigidly, then you’re putting some energy into rotational kinetic energy, in addition to the energy you’re putting into gravitational potential energy. In actual practice, though, I can’t imagine that that’s significant, especially since just moving the dumbbell on the end of your arm is going to involve significantly more rotational kinetic energy.

Isn’t the whole point of dumbbells putting stress on your muscles?

I’m not very familiar with the dumbbell snatch, but doesn’t the catch at the top involve a wrist rotation in the last fraction of a second of the lift? It may not be the magnitude of rotational energy that must be imparted, but the quick rotational acceleration and deceleration required.

ETA: The snatch demonstration starts at about 3:50 in the video.

It would drive me nuts if I had to work out with loose, floppy dumbbells like those in the video.

If you are targeting a specific muscle/group, and you want maximum concentration only on that muscle/group, then any energy/effort dedicated to another muscles group (to stabilize/resist inertia) is going to take away from the theoretical 100% effort focused on the targeted muscle/group (it can’t be 100%, but that’s the theoretical goal to pursue).

It has nothing to do with workout efficiency. It’s for safety. If you have to loosen your hand enough to let the dumbbell rotate in your hand, then you’re loosening enough to possibly drop the weight. That’s a really bad idea when you’re slinging heavy weights above your head. That’s why he said they weld the ends instead of depending on a nut; the nut can loosen under rotation and come off.

Philster, I completely disagree with you on assisted vs. free exercises. The time to build up secondary strength is before you pile up weights to high levels. Not only that, but you should be teaching good form for free exercises when you’re still limited to light weights, before you start ingraining bad habits. Smith machines can be useful for training sticking points, and in a pinch will do for self-spotting, but they’re terrible for learning how to actually lift heavy weights.

Isolation is okay for bodybuilding, but not good for strength. Quick example of how not building secondary musculature and control limits you. There are a lot of bodybuilders who can strict military press more than their body weight, especially if they’re using a Smith machine. Ask those guys to do a handstand pushup. I’ll be nice and let them use a wall for balance. I guarantee every single one of those guys will have trouble getting even a few reps. Their form will be shit, and they’ll struggle through at least part of the exercise’s movement. There should be no strength limitation—after all, they can press more than that—but since they’re not used to stabilizing a weight through that range of motion, they’ll be horribly inefficient and unable to actually apply their strength.

You’re probably thinking, “So what? So they can’t do a bodyweight handstand pushup.” Well, there are synergistic strengths in movement. Some of the same muscles you use for stabilizing a weight over your head are used for direct and secondary strength in the bench press (which is a vastly overrated exercise, IMO; pushing strength is very rarely used in real life unless you play pro football). By doing freestanding overhead presses through a full range of motion in front of the neck, you’re using all those stabilizing muscles that will help you with your max bench.

Another example: using straps to deadlift more than you can hold on to ultimately builds a strength imbalance that limits your growth in another area. If your biceps aren’t strong enough to resist the forces in a deadlift, your grip weakens to prevent muscle tears. Deadlifting with straps courts injury and limits the growth of your biceps. If you’re losing grip in your deadlift, you’d be better off doing some weighted chinups or even curls in order to build that secondary strength rather than working around the limitation by using a crutch.

It has nothing to do with workout efficiency. It’s for safety. If you have to loosen your hand enough to let the dumbbell rotate in your hand, then you’re loosening enough to possibly drop the weight. That’s a really bad idea when you’re slinging heavy weights above your head.

No one attempts letting a dumbbell spin in their hand when doing dumbbell movements. They use a firm grip and just allow the entire dumbbell to rotate. The question is, is it worth it to go through the effort of attaining rotating dumbbells because of some superiority a spinning sleeve would have over a fixed dumbbell? I’m thinking that their isn’t and Chronos has the right answer.

Philster, I completely disagree with you on assisted vs. free exercises. The time to build up secondary strength is before you pile up weights to high levels.

I don’t think Philster was making claims you seem to think he was.

Isn’t the whole point of dumbbells putting stress on your muscles?

If the rotation puts stress on your wrist joints instead of your muscles, that might be something you’d want to avoid.

Not saying that’s the case here (I don’t know either way), but if it were, that would be a valid reason to use rotating dumbbells.

This is actually bordering on anti information. Listen to Steel. He seems to know much more than you do on the subject.

You can disagree with less ignorance.

Just my personal experience here. Doing bicep curls with a dumbell is a little hard on my forearms because of the rotation. But I accept that as part of the exercise and it helps work out my forearms too. Sometimes I end up with dumbell that has a loose weight that rotates as I lift and it freaking annoys me.

No one attempts letting a dumbbell spin in their hand when doing dumbbell movements. They use a firm grip and just allow the entire dumbbell to rotate.

No one attempts letting a dumbbell spin in their hand when doing dumbbell movements.

The guy in the video does. In the referenced segment he says that if he uses cast dumbbells, he has to let them rotate in his hands and he doesn’t like to do that, and that’s why they had the free-spinning versions built.

You would especially not do that if you were doing heavy dumbbell snatches. You would keep a firm grip and not worry about any minor effect rotating a dumbbell 180° from start to finish would have and instead worry about having a heavy dumbbell fly loose over your head and behind you.

The guy in the video does. In the referenced segment he says that if he uses cast dumbbells, he has to let them rotate in his hands and he doesn’t like to do that, and that’s why they had the free-spinning versions built.

I’m sure he meant, “I would have to do a dumbbell snatch with a cast dumbbell, and actually let the thing spin in my hand [if I wanted to avoid any rotational effect].” The “I don’t like to that” part was his way of saying he’s not going to quickly pick up a weight over six feet high with a loose grip for obvious safety reasons. There’s no way he is doing snatches of any sort without anything less than a firm grip.

You can disagree with less ignorance.

What ignorance do you speak of?

It would help if you were specific regarding what Philster wrote that borders on anti information.

What ignorance do you speak of?

In GQ, we don’t just chime in and discount comments, especially specific examples, then prop up someone referenced in a link (which contains information in dispute) and use that to make a smarmy comment.

“Listen to Steele”. Ok, see, the whole point is vetting out the truth about what he says.

Have we established that the weight has to rotate for the exercise? If it doesn’t, then what is the effect? Is the effect desirable or not? Also depends on what one’s goal is by performing the exercise.

I understand Steele’s point, but I don’t feel it’s a ‘must’, but see it as a preference. If feel the ‘preference’ part is because he is targeting and not wanting energy/effort used elsewhere.