picture of the worlds lights

Zaphod just sent me this link.
He took it from his spaceship, just before leaving for his home system. 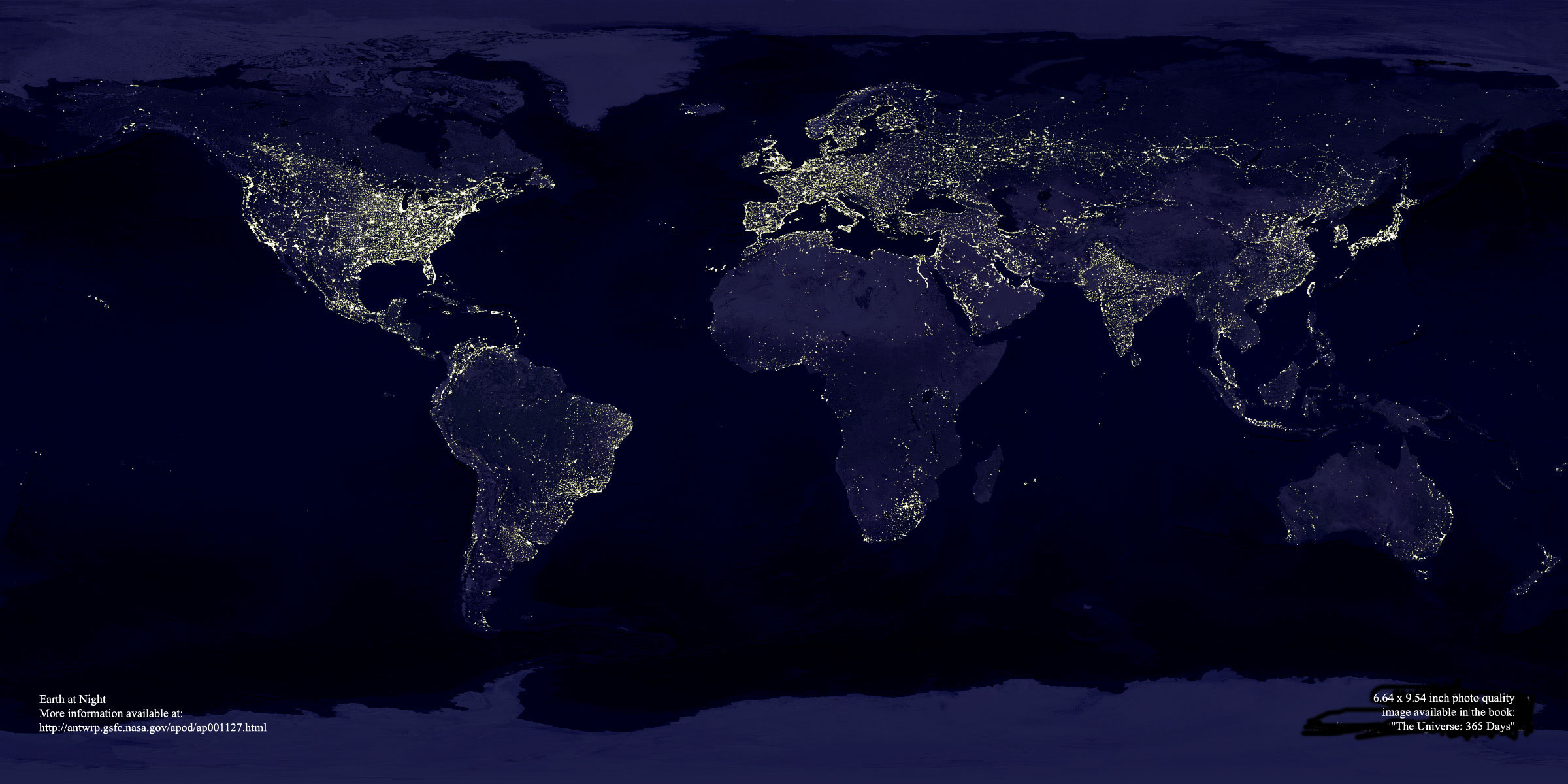 Thanks for the new wallpaper!

I’m pretty ignorant about making wallpaper, though. Could someone help me out with that? That pic would make awesome wallpaper!

When the image loads in your browser, just right click and select “Set as Wallpaper”
I save files in a picture file too.

Sorry, can’t help you if you’re typing on a fruit.

Funny, I just downloaded a very similar one from that site.
I didn’t save the link, but it was a composite of night lights and day image, showing mountains and deserts, etc, so you could see the relationship of urban areas to natural boundries.

That is just awesome!

Thank you for posting the link!

I like how the utter west of the Netherlands is completely lit up: this is because there’s a huge greenhouse industry there that uses night lighting to make the plants etc. grow faster. Clearly visible.
Why is the Nile completely ablaze, BTW??

I already have this picture — it was posted on a blog that I read.

I recently got the Encarta interactive World Atlas, and it rocks enormously. It has Earth by night as one of its map types.

The Nile really is incredibly bright, isn’t it?

MikeG, after I peeled the banana I type on, I was able to save the picture as wallpaper. Thanks!

Humble plug: I recently downloaded a shareware Photoshop plug-in that creates planet-from-space views. Generates continents, features, cloud formations, AND it has an option to put lighted cities in the shadowed side of any planet you render. ‘f anybody’s interested in seeing samples lemme kno’.

I have a very similar picture hanging up in my apartment, it’s about 3’ by 2’, but it doesn’t got into near the detail as this one. It’s called “The Brilliant Earth, A Nocturnal Satellite Map.” Has anyone seen this version in printed form?

Hey, I can see my house.

I find it highly improbably that Zaphod could get the Heart of Gold to be still that long…oh, wait, improbable…never mind…

Too cool, thanks dewt.

Europe and Asia look sort of like a dragon, if you squint.

Coldfire, if you’ll notice, the Nile is only brightly lit down to the Egyptian border. Egypt has a growing problem with population pressure, and there aren’t that many places in the country suitable for large numbers of people to live. The Nile Valley is the most obvious place, so it’s crowded.

Some other thoughts: In some dark places (Siberia for instance), there are groups of light spots that form or nearly form relatively straight lines. The lines are too straight to reflect a natural feature like a river; I assume we’re looking at major railways or highways, and the towns that have grown up along them in what is otherwise wilderness. So we may actually “see” the trans-Siberian railway!

Look at the Korean peninsula. You can see the border between North and South!

I wonder if there’s some way to tell when the picture was taken? Does anyone see any evidence of teh slash & burn of the rainforest?