If you like pipe organs, you might be entertained by this thorough history and tech review of same: 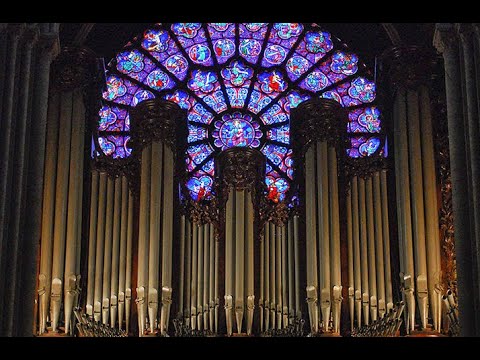 Some of the content got me curious about how much air power a pipe organ uses, and how much acoustic power any one pipe can produce. Thinking here not of the Mighty Wurlitzer, but a truly Brobdingnagian machine, e.g. the great organ at the Cathedral of St. John The Divine in NYC. How much electrical power do its blowers consume when it’s really shaking the stonework? What about the biggest pipes? Based on frequency and the sound pressure level at a given distance, what kind of acoustic power are they putting out?

I’ve been seeing that thumbnail, but haven’t watched the video yet, however, Rob Scallon did a video on the pipe organ in a church in Chicago and I’m fairly certain they showed the blower in that one (one of the blowers?).
Let me go find it…
Here’s the video, they get to the blower near the very end (though the entire thing is very much worth watching). I’m at work at the moment and didn’t want to turn the volume up so I’m not sure if they got into the specifics of the blower.
https://www.youtube.com/watch?v=JeB3JnKp8To

A church I did some restoration work in 20 years ago still had its pipe organ, which had a 100 horsepower, single phase electric motor driving the blower. The motor was a monster. I don’t know if it still operated (the church had been closed for years when I was there), and I never had the chance to mess with it. I did clean off the data plate, though.

Thanks Joey. As a huge fan of pipe organs, that was quite interesting.

A church I did some restoration work in 20 years ago still had its pipe organ, which had a 100 horsepower, single phase electric motor driving the blower

I install sound systems, mostly for churches. On one install it was necessary for me to run some wire through the pipe chamber. To get into and through the pipe chamber was like climbing a tree but sideways. Unbeknownst to me the organist came in for some practice. I was in the middle of the pipe chamber when I heard the blower in the room below me start up. It was instant panic because I knew there was no way I could quickly get out of there. Trust me, the pipe chamber is not where you want to be when the instrument is playing. My ears rung for days after.

What, no lock out tag?

Before the era of electrickery pipe organs had bellows pumped by humans. Smaller organs than the greats, but human driven nonetheless.
The idea of pulling out all the stops is probably a more modern thing. It might have made life a trifle hard for the pumpers.

I found this very deep summary of airflow needs.
http://www.fonema.se/fansize/fansize.html
Doesn’t quite answer the OP but certainly provides perspective.

I had no reason to expect someone to come in and start playing the organ. I did lock the door to the church and the pastor told me that the church would be completely empty all day. But the organist had a key for the door as well as the key for the organ keyboard. You are correct that I should have figured out a way to disable the organ. So it was indeed my fault.

Before the era of electrickery pipe organs had bellows pumped by humans. Smaller organs than the greats, but human driven nonetheless.

The video in my OP mentions a human-powered pipe organ that required 70 men to operate the bellows. If we assume 100 watts of mechanical power per person, then that organ could conceivably use up to 7 kilowatts of air power (about 9 horsepower).

Ultimate Restorations had an episode on the largest pipe organ. Accrding to wikipedia,

The organ’s wind supply is the most powerful ever used in a pipe organ. The DC motors for the original eight blowers had a total power of 394 horsepower (294 kW). These were replaced with AC motors in the early 1990s, which have a total of 600 horsepower (450 kW) and their seven blowers pump 36,400 cubic feet (1,030 m3) of wind per minute. My father had a single manual reed organ, originally foot-powered, which he converted to use an old Electrolux vacuum cleaner, which was enough wind for something that small. His hobby was pipe organs, so I got to see and hear plenty of them growing up, including a couple of the builders/manufacturing. Sorry I don’t have info on the blowers; at the time my interest was playing chopsticks which annoyed the pipe tuner at one of the “factories”.

They are fascinating instruments.