Poll: Elon Musk buys Twitter. What do you do?

Twitter is expected to shortly announce its sale to Elon Musk.

If this goes through:

(For the purpose of this poll, assume the news reports are genuine and this isn’t some weird pump-and-dump thing that Musk will abandon at the last minute.)

I use Twitter, but not every day. I will continue to do so, and if he’s as serious about free speech as he says he is, he won’t mind me throwing some shade at him every now and then.

I technically use Twitter. I go to Twitter after I’ve made my weekly blog post, and I post a link along with a fixed set of hash tags, all from my web browser on my laptop. Then I leave until next week.

I go there for the same reason I go to Facebook: advice to authors says you gotta have a platform, an online presence in social media. Whatevs. If Twitter changes, it’s unlikely that I’ll notice. Unless it changes from being the reincarnation of the AOL “lobby” you landed in when you first opened AOL chat back in the 1990s. I might notice if it becomes a locus of coherent communication or something.

I don’t have a Twitter account, but a crap-ton of football news is unfortunately glued to it. I used to begrudgingly go over to look if necessary. Now, I will downvote any and all reddit posts that are simply copy-paste twits.

I answered that i am not a twitter user and this changes nothing. But I do actually have a twitter account, and I occasionally see tweets from people I followed a long while ago. I don’t use it though, and any emails I see from twitter get deleted unread. Not out of spite, but lack of interest.

Nothing about Musk’s actions regarding Twitter will change that.

I was hoping he was buying in out of spite and only intended to shut it down. What a wonderful thing that would be. I don’t think that will happen though.

Does anyone know what the business model for twitter is? Do they have ads?

I am not a direct Twitter user. But i get a lot of news and commentary indirectly via Twitter, because a lot of friends, and my husband, use Twitter and show me snippets.

So…i still won’t be a direct Twitter user. Will i see as much Twitter content? Will i feel the same about it? I guess i don’t know, yet.

…& it’s now being reported to be a deal

I was hoping he was buying in out of spite and only intended to shut it down. What a wonderful thing that would be. I don’t think that will happen though.

Depending upon what changes he makes, people might flee. That will one of: significantly decrease it’s value (both his asset value & the value to users, which will cause a death spiral), shut down, or become a sounding board for one viewpoint & not the population in general the way it is (supposed to be) now.

Yup, i have five news alerts on my phone saying they’ve reached a deal.

Kids these days are pretty sharp. If Musk turns it into a right wing party house, it will soon become a right wing echo chamber. it’s hard to influence anyone if no one is listening to you.

Angelo Carusone, president of media watchdog group Media Matters for America, said in a statement Monday that a Musk takeover of Twitter means Trump “will almost certainly be replatformed in weeks.”

Musk is either unaware of the massive disinformation that has distorted and threatened the very existence of American democracy, or he supports that disinformation in furtherance of his own ideology. Either option is frightening.

I’m sure there’s been phone calls already from the Orange Peril to Musk, replete with flattery and hopes that “he’ll do the right thing”.

Musk is already reported to have announced that he doesn’t believe in banning people. So yeah, it seems clear that trump will be back.

I use Twitter a lot, but the vast majority of of my interactions involves pop culture and travel, not politics. (E.g. I follow a lot of pop musicians, concert venues, airports, and airlines.) So my personal experience won’t change much, I think. If I’m wrong, I’ll reconsider.

Wow. Less than a quarter of Dopers (at least who replied), including me use twitter.

I barely use it as is. (I literally have no timeline.) I don’t see that changing. If I used it more, it would impact me a lot, though. There are tons of people, some high profile, who leave because of the harassment, and that’s why it was clearly in Twitter’s best interest to get rid of it.

It is exactly the celebrity aspect that is the most affected, as they are the prominent people who tend to leave. They don’t need Twitter to make them more popular. Twitter needs them to seem like the official social network to interact with celebrities.

And they definitely don’t need to become the one place that replatforms those who are caught engaging in said harassment or, worse, spreading false information to try and cause harm and undermine the government of the US. Part of the reason Twitter does what it does about this is that they see the writing on the wall. The other half is simply that the majority of its users support these actions.

It’s also suspicious looking that, at the time when all of the corruption is being revealed, someone comes in and needs to buy a publicly traded company at what would be a loss. I very much suspect that Musk will be caught up in this investigation now, and there is no way that Musk doesn’t have skeletons in his closet being as rich as he is, plus his other psychopathic behaviors.

What matters from a business perspective is growth, and being the anti-woke company that Musk seems to want Twitter to be is only a detriment to that growth. There really weren’t a lot of people who were so mad at Twitter for banning their right-wing celebrity that they left.

He can get up view counts artificially, by allowing the trolls and fake accounts back in, but those don’t translate to increased financial support. And they very much do degrade the product.

I said that my usage won’t change much. But it really doesn’t take much when multiplied by as many users as Twitter has.

This was an utterly stupid decision, taken by people who are more interested with a short term cashout. The only way this doesn’t harm Twitter is if he reneges on his previous claims.

If re-platforming Trump and the COVID-deniers was profitable, other companies would have done it. Same for trolls, bigots, and harassers.

I’m wondering how I’ll vote when he runs for president. I guess it just depends…

Trump says that even if his account is reinstated, he’s not going back to Twitter and will “stay on” Truth Social, which he’s actually never posted on. 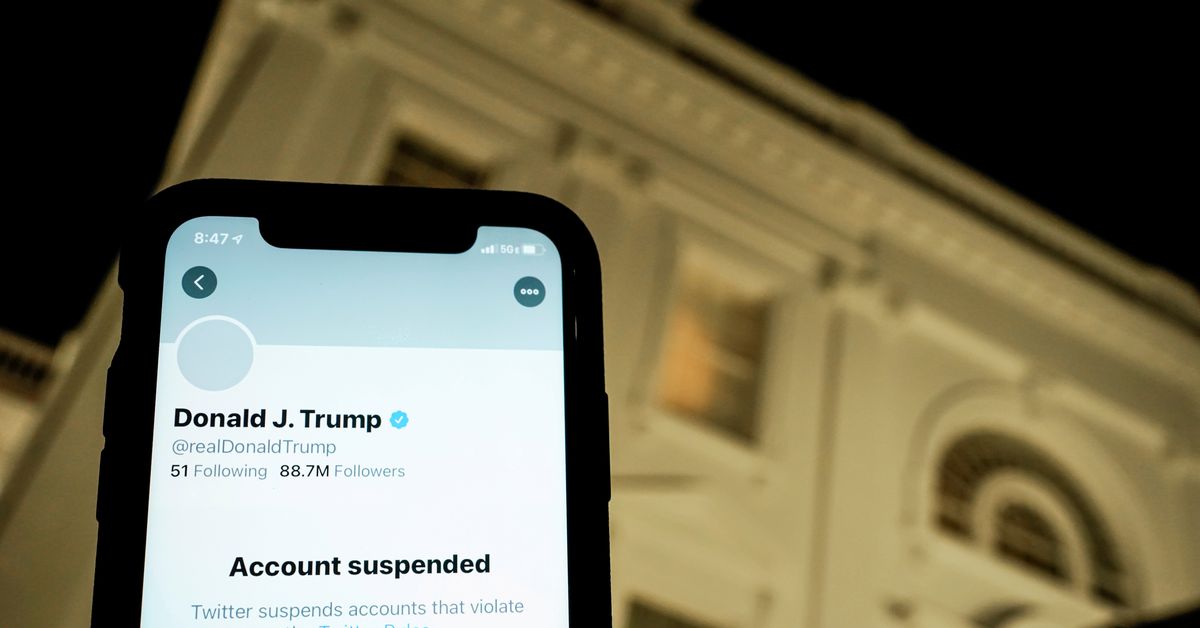 Former U.S. President Donald Trump said on Monday that he will not return to social media platform Twitter even if his account is reinstated following the platform's purchase by billionaire Elon Musk.

Of course, the only time Trump doesn’t lie is when he’s asleep.

I’m wondering how I’ll vote when he runs for president.

Not without a constitutional amendment, he won’t.

Of course, the only time Trump doesn’t lie is when he’s asleep .

I’m sure he tells people in his dreams he won the election and was the best president EVAH!

Not without a constitutional amendment, he won’t.

I know, I know. I guess I’m just at the point nothing would surprise me any more.