Now it has been over 50 years since I had a physics class, but I’m thinking the Power of a battery in kWh is very different from the Energy of a gallon of gas in BTU’s and the two cannot be compared. But apparently the EPA is making this comparison and I’ve found a website that has a kWh <-> BTU conversion calculator.

What am I missing?

Energy is energy. There’s nothing wrong with comparing kWh with the energy content of gas. kWh, joules, BTUs, and so on all measure energy and only differ by a multiplicative factor. No different from miles vs. kilometers.

Where a difference does come into play is that gasoline produces thermal energy. Due to Carnot’s laws, this necessarily means that a conversion to other forms–specifically mechanical or electrical–comes with an efficiency loss. This loss isn’t something that can be reduced by building a more refined engine. It’s inherent to the laws of physics.

A battery has no such inherent inefficiency. It can get arbitrarily close to 100% efficiency. That’s one of several reasons why a Tesla can go 300 miles on the equivalent of 2 gallons of gas.

Also of note, both kWh and BTU are units of energy and therefore, aside from matters of practical efficiency, are directly comparable.

Similarly, the energy content of gasoline in BTUs tells you nothing about the rate at which the engine turns that gasoline energy into useful power. Thus a big V8 produces more power than a little four-banger, from exactly the same gasoline, by consuming energy faster.

IOW,. both kWh and BTU measure energy content, but it’s the rate at which that energy is consumed by power-producing devices like engines, motors, lights, and radio transmitters that determines power.

the Power of a battery in kWh

A kilowatt of power is one joule of energy per second. So a kilowatt-hour is 1 joule per second * 3600 seconds = 3600 joules of energy.

A battery has no such inherent inefficiency. It can get arbitrarily close to 100% efficiency. That’s one of several reasons why a Tesla can go 300 miles on the equivalent of 2 gallons of gas.

If the energy that initially charged the battery came from a thermal power plant (i.e. coal, nuclear, or anything else that used heat to drive a steam turbine to generate electricity), then the “300 miles on the equivalent of 2 gallons of gas” comparison kind of falls down a bit.

The one Tesla Model S I was familiar with had an 85 kWh battery and a range of 262 miles. 85 kWh is the equivalent of 2.4 gallons of gas on a simple energy-for-energy comparison, but if the electrical energy came from a thermal power plant, and the overall efficiency from the raw heat input at the power plant to the charging of the battery is 30%, then it’s more sensible to say that this car can go 262 miles on the equivalent of 8.06 gallons of gas - which is 32 MPG. That’s actually pretty good for a car that has 360 horsepower on tap, but if you’re using fossil fuel (coal, natural gas) to generate the electricity, then that’s a significant carbon footprint. The environmental footprint improves considerably when you charge the car with green energy (solar, nuclear, hydro, nuclear) instead.

The peak power output of a battery-electric vehicle’s drivetrain will be subject to the lowest of three limits:

Whichever is the weakest link determines the peak power output for the entire system. Good engineering dictates that all three components be designed with something close to the same max power limit; otherwise money is being wasted building in performance capacity (in overperforming components) that can never be used.

It’s possible for a battery to have very high volumetric energy density (high joules/m³ or joules/gallon or whatever), but also be completely useless. You also have to take its internal resistance into account. At first glance, a battery that can store 150,000,000 joules/gallon might seem like it’s better than gasoline. But if it has 100 ohms of internal resistance, it’s pretty much useless. So power is also important. 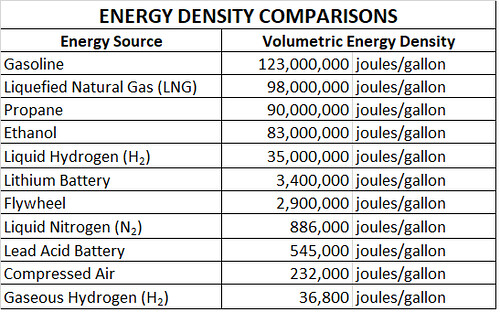 I need to add lithium ion batteries to that list.

It should not be confusing, because the engine power is always given in kW, not kWh. Example: a 2022 Honda CBR1000RR 4-cylinder engine generates [this may not be accurate] a peak power of 160 kW at 14500 rpm, with peak torque 113 Nm at 12500 rpm (NB not the same rpm!!). An S8G naval nuclear reactor generates 220 MW (only a certain fraction will be available as useful electrical power because a heat engine is not 100% efficient). And so on

It should not be confusing, because the engine power is always given in kW, not kWh.

In the US, it’s much more common for mechanical power output (e.g for electric motors or piston engines) to be expressed as horsepower. The average person is much more familiar with using watts/kilowatts for measuring electrical power, even if they don’t fully understand what power is (in the physics sense); some are quite surprised when they are made to realize that kilowatts and horsepower are both units that measure the same physical phenomenon.

And if you’re dealing with heating appliances like furnaces or water heaters, BTU/hr is yet another measure of power flow.

Technology is moving fast, it maybe good to add the new fuels. I will see if I can find some time to work out the specific energies of :
1> Ammonia
2> Cryo Compressed Hydrogen

These have 0 carbon footprints

A kilowatt of power is one joule of energy per second.

Th’ heck? A watt is one joule per second. You’re off a thousandfold. I mean, fun’s fun among friends, but don’t try to plan any road trips this way.

It’s the same with calories. When people say that a particular amount of food has a given number of calories, they usually mean kilocalories. It’s the amount of energy needed to heat up a gram of water by one Kelvin (equivalent to a degree Celsius). This allows for direct calculations: If you drink half a litre of a beverage chilled to, say, 5 degrees Celsius (41 degrees Fahrenheit), your body will burn about 16,000 calories of energy to heat it up to body temperature. But these are only 16 of the “large calories”, ie kilocalories, that nutritional values are expressed in.

Th’ heck? A watt is one joule per second. You’re off a thousandfold. I mean, fun’s fun among friends, but don’t try to plan any road trips this way.

Fortunately I think that only screwed up one of my conversions in that post:

A kilowatt of power is one joule of energy per second. So a kilowatt-hour is 1 joule per second * 3600 seconds = 3600 joules of energy.

While I much prefer SI units for actual use, I do think that horsepower, as a unit, has pedagogical value. How much work can a horse do? Can it do enough work to plow a field? Sure, given a few days. Can it do enough work to plow a hundred fields? Given a year or so. There’s no limit to how much work a horse can do, eventually. So there’s no horsework unit. But if you measure how quickly a horse can do work, then you’re looking at a unit of power, the horsepower.

(well, not really, because a horse can actually exert two or three horsepower. James Watt’s horses were apparently pretty lazy. But it makes conceptual sense.)

If the energy that initially charged the battery came from a thermal power plant (i.e. coal, nuclear, or anything else that used heat to drive a steam turbine to generate electricity), then the “300 miles on the equivalent of 2 gallons of gas” comparison kind of falls down a bit.

While true, there are practical reasons why fixed thermal plants can achieve higher efficiencies than a car can–often double. A car engine has to work on a wide range of power levels, while a power plant has a close to fixed load. There are fewer weight limits on the fixed plant and they can make use of various options to extract more energy from the available heat. Larger plants tend to be naturally more efficient just due to cube-square scaling laws. And so on.

Finally, as long as we are looking up the “long tailpipe”, gasoline takes energy just to refine it. Approximately 7 kWh of electricity per gallon. An EV can go about 30 miles on that. In other words, they’re about as efficient as a decent ICE even if you don’t count burning the gasoline.

All that said, no doubt that we should be moving almost all electricity production to wind/solar/nuclear.

For both an electric car powered by a fossil-fuel power plant, and a gasoline car, there’s a step in the process where you’re turning heat into usable work, and in both cases, that step is where most of the inefficiency in the entire process occurs. There are plenty of other inefficiencies, too, but all of them added together are less than the heat-engine step. So really what it boils down to is just that a large, stationary power plant can be much more efficient than a small, mobile engine.

Thanks. This is explanation I needed.

So really what it boils down to is just that a large, stationary power plant can be much more efficient than a small, mobile engine.

The hydrogen itself can be made in a variety of pathways : using fossil fuels, electrolyzing water with wind/solar, using bio-fuels, etc. etc.

Also worth noting is :

For Gasoline Engines, the Horsepower quoted is Brake Horse Power. Gasoline engines do not produce much power at low speeds. So the horsepower is measured at a Rated speed.

For Batteries, typically the Ah or KWh is over a 20 hr period at 80F. A 1 Ah battery means, a battery capable of giving (1/20) amps over 20 hrs at 80F. If you withdraw more amps (discharge faster), then it will give less Ah and waste energy as heat.

If BTU is a measure of energy, what does it mean when a gas grill is advertised as “70500 BTU” ? This explanation at Napoleon says a BTU is 1055 joules, but doesn’t address the energy vs power thing – worse, it discusses energy per square inch. Shouldn’t a barbecue grill be rated on its power output (in BTU per hour) ?