Quirks of your local TV newsanchors

First, let me say that I love these people. I watch them every morning and every night. They are the fuzzy blanket of normalcy draped over the rocky chunks of news…or something.

Every time I travel somewhere, it feels strange to get the news from whoever does the job at their local station, but of course those guys are somebody else’s fuzzy blanket of normalcy (even though they’re totally weird).

We have a weather guy who always uses the word “eventually”, but pronounces it “E-bain-tually”. I don’t know what that’s all about. Never have I heard anyone else say it that way.

There’s a female reporter who says her name at the end of every story she covers, but gives it the inflection of “Say whaaaaaaaaat?” I can’t help but mimic her out loud every time, but I like it.

There used to be a lady on who had a very sunny personality. She really brought the cheerfulness level up in the studio. But the best thing about her was that she looked like a living character from the animated show Duckman. She was a delight, but unfortunately has now moved on to greener pastures.

Anything interesting about the TV newsanchors in your area?

We had a weather guy way back when who had, unusually for tv people, a speech impediment. At least I thought it was an impediment. He would pronounce Grand Island “Gland Island”. I brought him up on a Facebook group for my town. Some people had heard the rumor that he had lost some of his tongue in the war. Some people thought I was making fun of him. One person who supposedly knew him well opined that the speech impediment was actually a Southern accent.

We have a guy on Detroit’s channel 4 that ends his field reports with a drawn out almost English accent catch phase of “reporting for Channel Foooouuuuur” all the time. It’s kind of annoying but you don’t forgot who just reported.

Pittsburgh had Don Cannon, a decent anchor who had a drinking situation. He eventually did the news falling-down drunk, and that was the end of his career.

We had a weather guy way back when

That reminds me of a weather guy we had when I was a kid. He was so enthusiastic it was comical. And then we found out why… in the middle of a forecast, the anchor interrupted with “I’ve never seen anyone so excited about a blizzard.”

"But, it’s a blizzard in the morning with sunshine in the afternoon! That IS exciting! Look, I came here from a station in the Nevada desert, where I did the same forecast almost every day. And I’m SO glad to be here… where you have WEATHER!"

The first one that comes to mind is “PaulBlumeFox9”. The way he signs off his stories - whether they deal with death and mayhem or puppies and kittens - is always the same and it’s become a bit of a joke.

We have a weather guy who always uses the word “eventually”, but pronounces it “E- bain -tually”. I don’t know what that’s all about. Never have I heard anyone else say it that way.

Sounds like a Spanish, or faux Spanish, accent to me.

I’m not much for TV news, but the quirks here in So FL are rather basic.

All the women are just so over-the-top silicone enhanced, duck-lipped, and yoga-pants round-rumped as to be caricatures of one another. Mostly Latina with a light mix of the other flavors.

Pandering? Can we say Pandering? Why no, of course we can’t; a respectable national network would never do such a thing!

We’ve had a newsanchor (I don’t know whether he’s still around) who has trouble pronouncing his own name. He pronounces everything else perfectly, but stumbles over his name. He can’t seem to make the bridge between his first name and his last.

I was just thinking of this guy yesterday. Marty Engstrom, also known as Marty on the Mountain, was a television engineer based on top of Mt.Washington when WMTW had its transmitter there. On his first day of work, he was miffed to learn that one of his duties was to report on camera about weather conditions on the summit. This was in addition to the regular weather report delivered by a meteorologist back in the studio in Portland. The first day, he failed to smile and his boss got on him about that. Thereafter, he would deliver his report in his thick New England accent, with a monotonous unsmiling delivery, then at the very end flash the fakest fake smile you ever saw, which became his trademark. You can watch his last report, though he is uncharacteristically giddy here: https://www.youtube.com/watch?v=-j_2W6GYMvc

Marty on the Mountain retired around 2002. He was mentioned in the news recently because his namesake Marty, the Mt Washington resident cat, recently died. Marty himself (the human one) is still alive.

@bibliophage: I did not know about Marty; he certainly seem to have been a classic NH character. Thanks for the point-out.

For those not in the know, Mt. Washington NH is infamous among weather geeks nationwide for routinely having the most awfulest weather in the entire USA. It rivals the worst of Antarctica except in temperature. Seriously. See for more:

The Mount Washington Observatory (MWObs) is a private, non-profit scientific and educational institution organized under the laws of the state of New Hampshire. The weather observation station is located on the summit of Mount Washington in New Hampshire. The Observatory's mission is to advance understanding of the natural systems that create the Earth's weather and climate, by maintaining its mountaintop weather station, conducting research and educational programs and interpreting the heritage ...

Not a TV anchor, but a radio host comes to mind, on a station that I always listen to on the car radio because it has great programming. This turns out to be a really nice person, and I once looked up her bio, and she has an impressive journalism background. But her radio persona absolutely DRIVES ME NUTS!!! Sometimes, especially if I’m in a bad mood, I just simply have to turn her off, along with some well-chosen profanities. It’s really hard to describe, but it’s a very artificial (to me) speech affectation, where she just places unnatural emphasis on random syllables, or stretches them out as if she were about to break into song. No one talks like that naturally, so why offend my ears by talking like that into a studio microphone?

If you heard it, you might not think it especially remarkable at first, but trust me, it’s distinctive and it grows on you. And grows and grows, until I either have to turn down the volume, switch stations, or turn it off altogether.

had a guy who pronounced Camp Lejune as Camp Lajourn , he said that was correct.

He’s been off the air for several years now, but WTHR in Indianapolis used to have a feature reporter named Tim Bush, who for some reason went by the name of “Tree Boy.” I have no idea why he used that name, but it was always strange and amusing to hear the anchors say things like, “And now to tell us about the new Black History Month exhibit at the museum, here’s our man on the scene, Tree Boy.”

“E- bain -tually” is a line from Fawlty Towers — a very funny line, in face, when it has context around it.

They’re all gone now, and the new people are blandly interchangeable. No quirks anywhere, sad to say.

“E- bain -tually” is a line from Fawlty Towers — a very funny line, in face, when it has context around it.

Ask and ye shall receive. 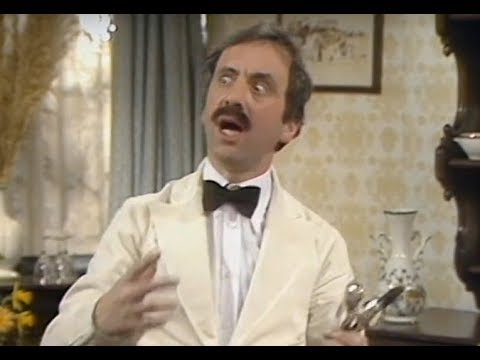 we had a weather guy with a real long name. He was not a meteorologist like they all are now… They called him the biggest name in weather. rumor has it he did a few shows tipsy. He was known to hang out in local bars so that was probably true.