Recent stories say there is only about a 50% chance that Notre-Dame cathedral can be restored. What would be the feasibility of this following process - considering that churches (and other buildings) have been dismantled and rebuilt in the past?

Could this be done? How difficult would it be to separate the mortar-bound stones? With modern construction methods - how long would it take to dismantle and then to rebuild it? Years? Decades? Centuries? Any major modifications needed so that it would last another 800 years or so? 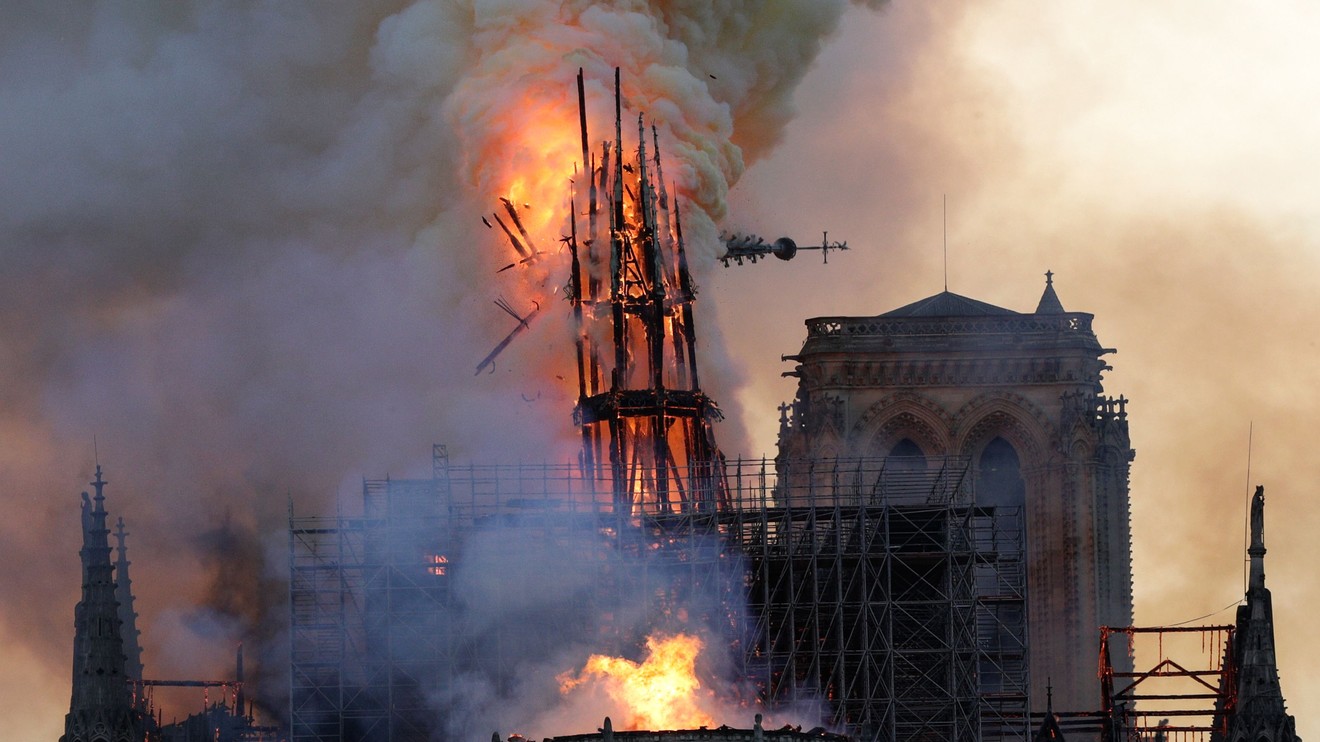 I’d say very, very, very difficult. Those flying buttresses weren’t an artistic choice–they were half-assed props put in place after the fact to hold up the near-collapsing walls of a badly designed building. I’m really, really surprised the whole thing didn’t collapse in the fire.

(Adding from looking at the Wiki, they aren’t exactly sure when the butressess were added, original or an afterthought. My above points are from an episode of some PBS series on cathedral construction or something I saw a number of years ago.)

Anything can be pulled apart, cleaned, stored and rebuilt with enough money and will.

In the specific case of Notre Dame the questions they are grappling with right now are:

All these questions require time, expert input and a lot of agreement among the congregation, religious establishment and heritage authorities, which can take a small eternity to line up. All that has to happen and a final plan decided before you start spending serious money. The OP’s proposal would be seriously worked through, but its not a guaranteed fix to the problem.

Here’s an anecdote: A certain regional bank in Paso Robles, CA had an antique covered wagon on display in its parking lot. I don’t think the bank owned the wagon. I think it was owned by the city, or a local historical society, or some such. But the bank donated the space in its parking lot to display it. Hey, good advertising for the bank, no? Every year, there was an annual parade, in which the wagon was hauled down from its pedestal and paraded through the streets.

So, one fine night, for no obvious reason, some jackass arsonist torched it. The canvas cover and all the superstructure were wasted, but the chassis was salvageable (though charred).

So the city sent the remains to some authentic bona-fide Amish cartwright somewhere in Amish Country to be restored. Eventually the city got back a brand spanking mostly-new covered wagon, built upon the original chassis.

That was 20-some years ago. The regional bank has long since folded and/or sold out to some larger bank. The wagon remains on display in another place a few blocks away.

I recall a tale of a modern Westerner pointing to an ax. “That was great-great-grand-dad’s! Hauled all the way out from Back East, way back in ought-ought. Sure, the handle has been replaced a few times, and the head too, but it’s still Gramper’s original!”

Every molecule in your body is replaced (on the average) every seven years or so. Are you still the same person?

I recall a tale of a modern Westerner pointing to an ax. “That was great-great-grand-dad’s! Hauled all the way out from Back East, way back in ought-ought. Sure, the handle has been replaced a few times, and the head too, but it’s still Gramper’s original!”

At some point they seem to have forgotten it once belonged to George Washington, maybe when it got the ye olde fibreglass handle and the tungsten carbide head.

But, yes, the whole authenticity thing is taken very seriously in conservation work. If you are building an essentially new cathedral you might as well be honest and call it a modern replica.

The figure that “there is only 50% chances to save Notre-Dame” is a misquote/misinterpretation of what the rector actually said. What he said is that the cathedral would be safe once the scaffolding is dismantled, but that some parts of the cathedral would collapse if the scaffolding itself collapses. He used to figure 50% in a strange way; he never actually said 50% probability (that this would happen); instead I think that he expressed something in the line of “we are half-way there”.

Here is the quote in French (from here)

I would translate it, as literally as possible, as follows: “Today, she is not out of danger. She’ll be out of danger when we remove the scaffolding. There is always a risk, which means that she is now 50% rescued. But there is a 50% that means that if the scaffolding falls on the vaults, three vaults will fall. The building is still very fragile”. Note that the “there is a 50% that means that […]” is not really proper and clear English, but the original " il y a 50% qui fait que […]" isn’t very clear Frech either, and does not necessarily imply probability.

This being said, touch wood and cross fingers that nothing gets wrong!

Coventry Cathedral was destroyed in the Blitz and they decided to leave the ruins standing and made safe while building a new cathedral close by. Many (some very moving, others less so) events are held within the ruins.

Missed Edit:
Edit - The new cathedral is the modern building at right angles to the old one. The adjacent spire belongs to the Parish Church.

How to rebuild it is simply an interesting technicality. I find it exciting that our generation will be able to make out imprint on such a landmark.

There is a barely above zero chance of restoring the cathedral to the previous design. There are not any old growth trees of the required size to replace what was lost to the fire. At best, they could use laminated wood or another material altogether. The roof was tiled with lead, that is not acceptable in the 21st century. Notre Dame Cathedral can be rebuilt but it cannot be restored.

If you are in Milan, visit da Vinci’s Last Supper. (Book tickets and timeslot well in advance) When the Allies were approaching (and bombing the crap out of everything) sandbags were piled against the wall with the painting to preserve it. The roof was caved it, but the painting and wall preserved. When they rebuilt the church, they simply left the restored building roof shape in white rather than try to reproduce all the other paintings on the sides and ceiling that had been destroyed - a strong reminder of what was gone.

I also remember going into a small church not far from the Tower of London (All Hallows by the Tower?). Some guide mentioned that it was one of the oldest churches in London - then I looked up in a side aisle and it had a flat concrete roof. The church was heavily damaged in the blitz, and quick and simple repair had been made. That’s the other extreme.

The Notre Dame building was mainly stone, and the fire burned the wood roof covering the stone vault over the main church. It was bad enough that some sections of the vault collapsed. With modern construction techniques, I have no doubt they can rebuild the missing sections, and if necessary shore up the building with extra reinforcement (and maybe hide it in the roof area).

(As I understand it, the flying buttresses were part of the original structure. They are the result, not of problems with the original building, but rather progressive trial and error on earlier similar buildings.)

Some restoration simply can’t be done to original specs. The question is - how true to original do you want to be? The cost of a full roof made of the same giant oak beams would be prohibitive - if there is even enough such material available nowadays. But all that was hidden under the roofing. The original roofing (slate?) was underlaid with sheets of lead. We have better, cheaper more durable materials nowadays. There are materials that work better than lead (less toxic, too). Do you want to use slate shingles, or some substitute that is lighter, cheaper, more durable but can be made to look exactly like slate? Do they rebuild the spire the same with wood(it was only added in the 1800’s) or build a replica in modern non-flammable materials? Or (heresy!) have a design competition like in the 1800’s and crown a building from 1100 with some design obviously from the 2000’s?

At the very basic - do they restore the vault using same stonework method - same block shapes? Same mortar mix or modern better tech? Match stones from near original quarries, or any stone of the same rough colour? (Or pour concrete and use a pattern in the form to simulate blocks?) All these are decisions that have speed reliability and cost implications.

From what I’ve read elsewhere, the basic stone structure is sound except for the parts under where the spire was. And fortunately, unlike later buildings, as I recall the interior ceiling was mostly unpainted block, not some priceless heritage painting.

(The story I heard was about Paul Bunyan’s axe. He used the same axe for so long and so often that he had to replace the handle 5 times and the head 3 times, but it’s still the same axe.)

They will rebuild it but it won’t be exactly they way it was.

If you want to know about rebuilding cathedrals and churches, perhaps Germany (and Austria, and some areas of Britain) have good examples. WWII did a number on historical buildings, and some places in Germany made a point of attempting to rebuild so things looked the same as they used to, where possible. Some of the older or less imposing churches has wood roofs, so the walls were relatively intact, and only the roof and windows and the interior décor needed replacing.

As for taking Notre Dame apart and moving it - why? It’s not sinking or in danger from floods, the land is not being sold out from under it, or any of the other usual reasons for relocation (check out Abu Simbel for a serious move job - they moved a whole cave temple.) Much of the basic structure is still intact, and as far as I know, in no serious danger.

But would you spell it wrong both days?

Nürnburg was pretty much leveled by 1945. I was there for wargames in 1975 and the place had been rebuilt to look old - very medieval except for McFooderies downtown. Visual restoration only requires time, money, energy.

Antigua Guatemala, the old cultural and political capital of Central America, was leveled by seismic activity many times. Restoration of collapsed buildings was a regular process, last time we visited.

Cheap and easy. Until the next earthquake. And if prisoners are inside then, well, there’s always more prisoners.

I would translate it, as literally as possible, as follows: “Today, she is not out of danger. She’ll be out of danger when we remove the scaffolding. There is always a risk, which means that she is now 50% rescued. But there is a 50% that means that if the scaffolding falls on the vaults, three vaults will fall. The building is still very fragile”. Note that the “there is a 50% that means that […]” is not really proper and clear English, but the original " il y a 50% qui fait que […]" isn’t very clear Frech either, and does not necessarily imply probability.