Recipes you have turned to since the world ended

Over in the shortages thread folks were discussing recipes with substitutions or even just the substitutions in random places in the thread. Lets put them all in one place to make it easy for someone to go back to a substitution they had read about a while back.

Due to COVID I’ve learned to make a few soft cheeses. Lately rennet has been easier to find than cream cheese. Culturing buttermilk is cheap and easier than going to five stores to find an almost out of date bottle.

So, what have you folks been doing to adjust for the empty shelves?

I’ve made pseudo buttermilk in a pinch - milk + lemon juice. Not something that I would want to do all the time, but it works well in baking.

I also have dry milk on hand, which is another thing that works well in baking.

Also subbing sour cream and plain yogurt for each other.

I made pasta a few times. Still not great at it but the batches improve a little each time. Not that I’m really seeing any pasta shortage, but I feel like it’s a good skill to have, just in case. And it’s fun, at least!

Food allergies means I have be very careful about purchasing already-made anything. When finding “safe” bread became difficult for me at one point I started baking again. Granted, there were flour shortages as well, but I’ve been doing baking often enough over the years that I had a supply on hand. So lots and lots of homemade bread.

Less ribeye, and less lambchops (less quantitatively, although “few” is the result). Mostly because our shelves are stocked; things just cost more.

The only shortages I’m seeing are diet tonic water (that’s going on two years now). There were flour and yeast shortages in 2021. Certainly shortages of labor are contributing to inflation as much as printing money, so in that sense, “shortage” will cause us to eat more cheap meat.

I’ll bring one thing I posted from there to here. Quick home made bread. I started doing this when high-gluten bread flour was unavailable. Now it’s my go-to recipe.

Bread round buns or “hot dog buns” - started in a bread machine.

Add the items to the bread machine in this order: Cut-up butter/margarine, milk, water, and one-half of the flour mix. Salt and sugar. The remaining flour mix. Yeast.

Run the bread machine on the “dough” cycle. This should knead the bread and allow it to rise once for about an hour. During the kneading add the other 1/2 cup of all-purpose flour gradually - stopping once the dough starts to form a ball whirling around in the machine. (I actually prefer to stop adding flour just a bit before - but you would likely have to make several batches to learn when the dough looks right to you.)

When the machine is finished, turn the dough out onto a floured working surface and roll it out about 1/2" thick. Cut into lengths for “hot dog buns” or cut off pieces and roll between your hands to form buns - your choice. Grease a baking sheet and arrange the individual bread doughs on the sheet. (You may want to slit the tops of the doughs.) Put in a blood-warm oven to rise.

Bake at 330 F until the bottoms brown. For my oven that’s about eight minutes AFTER the oven comes up to temperature. Move to a cooling rack and run a stick of butter/margarine over the tops.

Here’s the other recipe I mentioned, for when pie crusts or pies are not available:

“Impossible pumpkin pie - that makes its own crust”

Don’t expect this to form a real pie crust. It’s more like a pudding skin against the pan.

(My store stocked cans that were 1 oz different. Meh.)

I’ve done more hiking and less eating out, and have an ever evolving recipe for the porridge I make at home before hikes, inspired by my main hiking partner’s recipe.

Generally I buy crushed pecans, slivered almonds, golden raisins, dried cherries, fine shredded coconut, ground flaxseed, almond flour, wheat germ, and other things more or less like those. I mix 'em in a big jar I keep in the cabinet. On a hike morning I put a packet of plain oatmeal and a few spoonfuls of the mix in a bowl and add boiling water. Mmmmmm.

Some of these come and go on the store shelves. It’s no problem. The recipe meanders around and always stays different enough to be interesting.

I can remember a few very long months of pasta deprivation but thought that making pasta sounded really hard. I figured my noodles would be as tough as new shoelaces so choose to stick with something easier.

Food allergies means I have be very careful about purchasing already-made anything.

I have thought of folks with food allergies with a lot of sympathy during these times. Hubs and I are picky eaters but we won’t die if we have to eat a less favored substitute. Folks like you have to really work to not go to bed hungry at night.

@Bonum_Legatum thank you. You are the inspiration for this thread, it’s only right that you are here!

@Napier us non hikers need a good solid breakfast too! When I remember, I put some granola in milk overnight which makes a nice breakfast. You’ve given me some ideas to help keep things interesting.

I braved clouds of virions at Kroger and found the ingredients to make a great jambalaya to celebrate the end of the year/end of the world.

And I feel fine.

Turkey Meatloaf from America’s Test Kitchen. It takes a lot of ingredients (all the umami things) and takes as long to clean up as it does to prepare. But delish. The slices freeze and microwave well. 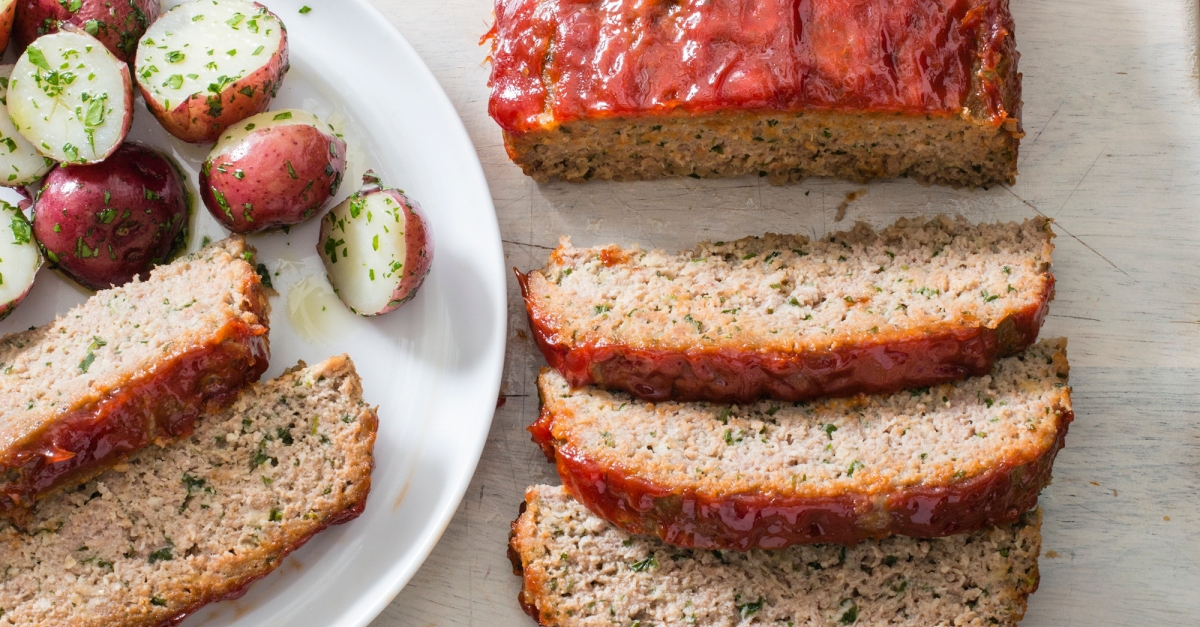 10-Vegetable Soup: low calorie, high fiber. Warm. You do the cooking at the same time as the prepping, so it’s very efficient. Substitute whatever vegetables you want. 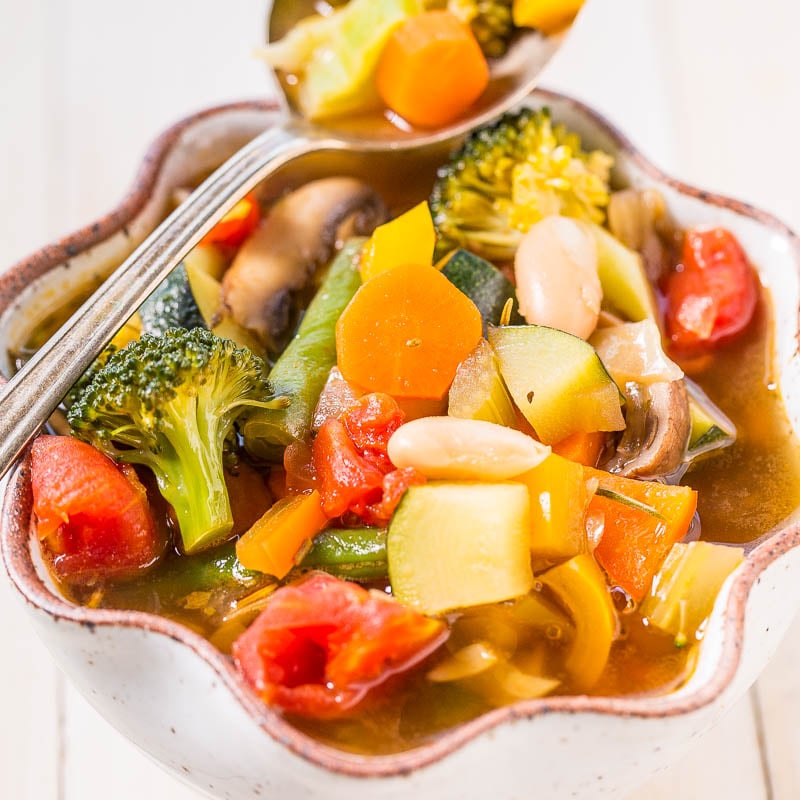 Weight Loss Vegetable Soup — Trying to shed some pounds or get healthier? Try this easy, flavorful soup that's ready in 30 minutes and loaded with

Hot Cocoa Cookies. I can’t find my exact recipe online, but there are thousands of recipes out there.

Cheesy Hashbrown Casserole: I was trying to duplicate a breakfast casserole I had at a Big Game brunch, and this one was not it but pretty good. I leave off the cornflake topping because, well, yuck. I freeze and microwave individual portions.

Cheesy Hash Brown Casserole is a classic recipe. You've probably had this at a potluck, a family gathering or another event. You may even have a copy of a recipe similar to this one tucked away in your recipe box or notebook of favourites. This...

I had a craving for Boston brown bread but didn’t have a coffee can, rye flour, or molasses. This simplified recipe skips the can, cornmeal and rye flour; I substituted slightly less maple syrup for the molasses, went a little heavy on the raisins, and added a pinch of pepper and something like 1/4 tsp each of cinnamon, allspice, and clove.

Hardly a classic Boston brown bread, but the texture was about right and it was very tasty. I still haven’t found molasses, but I don’t care - I’d make it again with maple syrup.

THANK YOU @CairoCarol for this recipe! I’ve always wanted to make Boston brown bread and have had a recipe for years, but I never remembered to save the right-sized cans to make it in. Now I won’t have to.

Cheesy Hashbrown Casserole: I was trying to duplicate a breakfast casserole I had at a Big Game brunch, and this one was not it but pretty good. I leave off the cornflake topping because, well, yuck. I freeze and microwave individual portions.

This is pure “it’s 40 below I want a hot casserole” fare. I had it once or twice a year in Wisconsin on days,like tgat.

Not really a specific recipe but if you go to a food pantry regularly you end with a bunch of canned food on your shelf.

So I continued doing what my family did living in poverty when I was child.

Just start dumping the cans of food into a large pot to make an improvised soup.

Sometimes we would add some browned ground beef to it. And any chopped up vegetables we might have in the fridge and
freezer. (I chopped a bag of frozen spinach into a pot of mine.)

The last batch I made had:

I added some water to make sure everything was covered and let boil and then simmer for a few hours and it tasted great!!

I discovered I like quinoa. And roasted sweet potatoes. And apple cider vinaigrette. Who knew? I think making these things fresh by myself has something to do with it.