Two friends are having a friendly game of rhetoric. Just for kicks, Person A assumes that Earth - rather than an oblate speroid - is actually a flat disc.

Person B says that this is ridiculous by mentioning how when one observes a ship going out to sea, the hull of the ship appears to disappear before the mast.
In response, Person A maintains that the disappearance of a ship over a horizon hull first is an optical illusion of perspective, no different from the apparent merging of the railroad tracks in the distance. A man at the foot of a tree a couple of miles across a plain may be invisible, while the tree itself stands up against the sky and is visible for miles. The Earth’s curvature of eight inches to the mile is not sufficient to explain the invisibility of the man.

My question to you is, how would you refute Person A’s response? :dubious:

Could you please elaborate a little bit?

Could you please elaborate a little bit?

Well, the the flat-earther is saying that “it’s just perspective,” and you can’t see ship because it’s so far away. So, use a telescope, and then they won’t have that excuse.

Telescopes would help, but a more elegant argument is this picture: The wake a ship leaves recedes into the horizon and then stops before the edges of the wake meet to form the tip of a triangle, as they would were the Earth flat.

Or you could just look at the arguments here, including such classics as “We have time zones” and “Gravity is largely invariant regardless of where you are on the planet.” No wells needed!

The hull of a ship is bigger than its mast and, when it not so far away as to be hidden by the curve of the Earth, is seen more easily, not less easily than the mast.

Your analogy with the man and the tree does not hold.

Haven’t done the math, don’t have time before bedtime - but consider one factor: it’s (stipulated) 8" per mile for the first mile. If the earth is spherical, the amount will increase roughly as the square of the distance. Two miles would then mean a drop of 4 x 8" = 32", 2-1/2 feet, about. So how tall does the ship have to be before the effect becomes noticeable, and how far can we track a ship out to sea?

The effect is not quite the same as objects becoming “smaller” from further away: the ship becomes both smaller and the bottom part disappears entirely.

The flat-earther needs to explain the entire phenomenon - er, as well as that eclipse phenomenon thingy.

I thought the easiest way to show this was the ship hull disappearing before the mast at a distance.
This wouldn’t be the same as converging lines. The suggestion about the wakes is new to me. Thanks.

You can also show this with posts and the shadow of the sun, I think.

Two friends are having a friendly game of rhetoric…My question to you is, how would you refute Person A’s response? :dubious:

Interesting essay about someone coming across a policy debater with further discussion about ‘quals’ versus quality.

@guizot: Perhaps this thread title isn’t the most accurate, my apologies. Yes, I a m concerned with the propositions more than anything.
Could anyone explain as to how the man/tree/field scenario doesn’t hold up? I don’t know how to disprove Person A’s idea about 8" not being enough to “explain the man’s invisibility”.
NOTE: I found this situation on the internet so I don’t know the answers.

@guizot: Perhaps this thread title isn’t the most accurate, my apologies. Yes, I a m concerned with the propositions more than anything.
Could anyone explain as to how the man/tree/field scenario doesn’t hold up? I don’t know how to disprove Person A’s idea about 8" not being enough to “explain the man’s invisibility”.

Telescopes would help, but a more elegant argument is this picture: The wake a ship leaves recedes into the horizon and then stops before the edges of the wake meet to form the tip of a triangle, as they would were the Earth flat.

Waitwaitwait. That is a picture of the wake of a ship, taken from the stern of the ship leaving the wake. Wake lines diverge the farther you get from the ship, so you would not expect there to be a nice vanishing point for the wake if the photo is taken looking aft; the lines should appear to diverge at some slight angle. Parallel lines appear to converge at infinity; diverging lines won’t appear to converge at infinity - they may appear to diverge, remain parallel, or approach convergence, depending on their angle.

If, however, you were looking at a ship just over the horizon that was moving away from you (such that you could still see the top of the ship but not the hull), the wake lines, if you could see them, would probably not meet at a point at the ship, since that point is over the horizon. That would be a pretty small effect, though.

Take a look at the original source my friend told me about; this guy has an answer for everything. 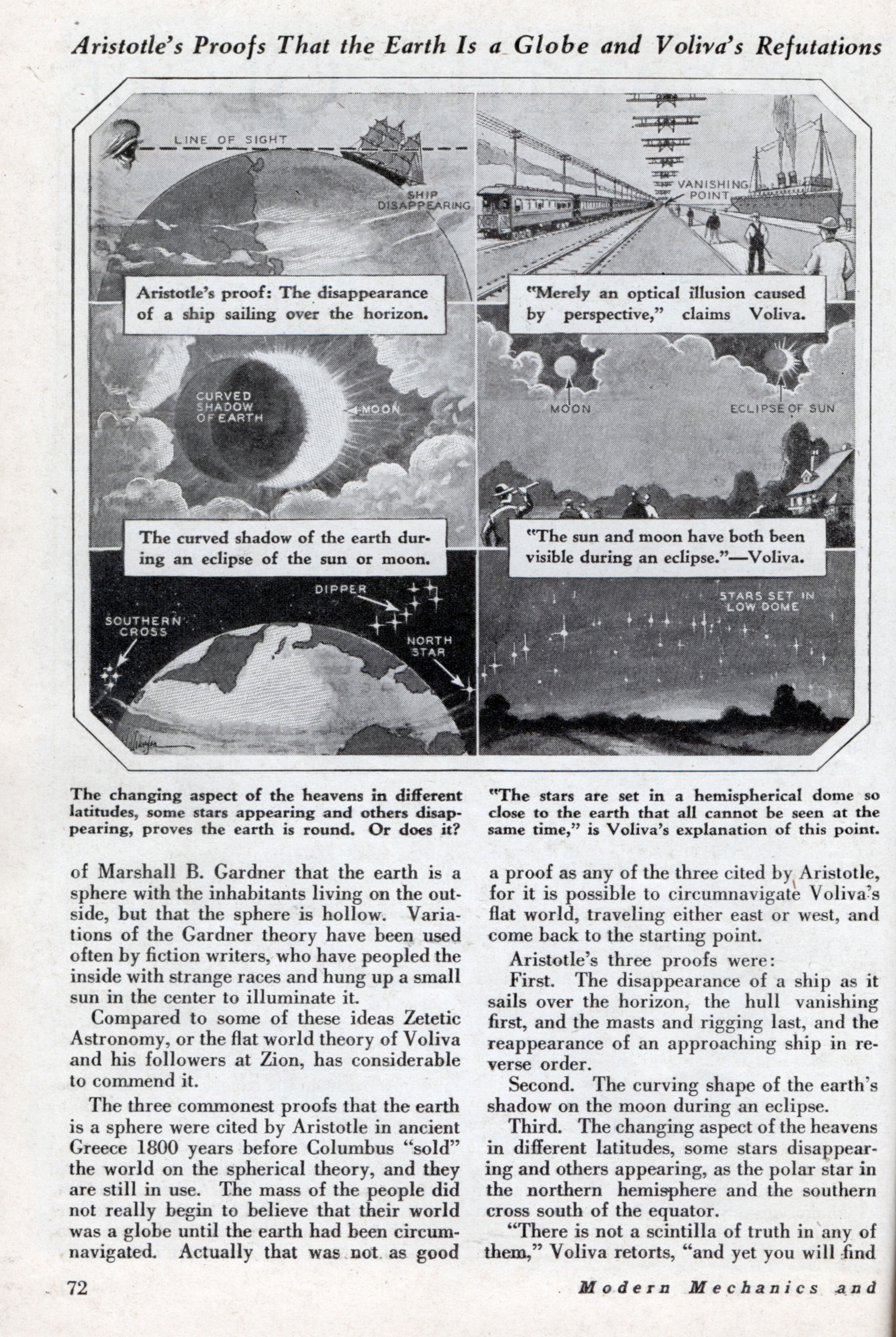 Just look at a globe. It’s obviously round.

this guy has an answer for everything.

Right - a brainless answer that ignores evidence readily available to anyone.

Take a look at the original source my friend told me about; this guy has an answer for everything.

The first one I can understand, but 2 and 3 are clearly wrong. There are rare instances of the Sun and Moon both being visible during eclipses, but they both have to be at the horizon, and they are only visible because of atmospheric distortion. There was quite a bit in the news about it a few weeks ago.

The third one is even more nonsensical. Whether the sky is a dome or whatever other shape, there are no points on it that should not be visible to any other point on a flat Earth. There might be local obstacles like mountains and trees blocking things close to the horizon, but you would not observe huge discrepancies like Polaris being near the horizon in Ecuador and near the zenith in the Arctic.

Take a look at the original source my friend told me about
http://blog.modernmechanix.com/mags/ModernMechanix/10-1931/globe/globe_2.jpg

Here’s the first page of that article, showing a diagram of Voliva’s concept of the Earth and the Sun. Note how - among other problems - this doesn’t allow for the Sun to rise and set.

The answer I was given was that the ocean isn’t perfectly flat, but has waves bouncing up and down, and these, especially when added up over distance, cause ships to appear to be “hull down” in the distance.

In the same sense, I was told that I can’t see the distant Himalayas because smaller, nearby hills block the view to these much taller, but more distant mountains. (Also, the atmosphere isn’t perfectly clear, and opacity accumulates with distance. Just as mountains appear to be blue or purple when 50 miles away, they simply can’t be seen at all at 500 miles away.)

These arguments fail when you take the trouble to make careful observations with decent instruments. You can go out to the desert, and look at long lines of electrical power pylons. You can go to places where the ocean cuts the land into large bays. You can measure the angles of stars or planets above the horizon; this, when done in partnership with friends at various distances, will quickly produce results that demolish (or at least call into serious question!) the tenets of the Flat Earth viewpoint.

Other observations require at least a little faith in humanity. You can talk to ships’ captains, or airline pilots, who have navigated vessels from South America to South Africa, or from South Africa to Australia. If the world was flat, as in the polar projection in the United Nations logo, these distances would be MUCH greater than they are on a globe.

Photographs from space, and GPS data, and other high-tech evidence, is also difficult to refute.

Hand-waving and saying “Refraction” only goes so far. Saying that NASA is part of a vast conspiracy is, alas, a pretty weak argument. (I’m not suggesting that anyone here makes that claim. It still has a following, alas…)