“Slipping dodging sneaking creeping hiding out down the street
See my life shaking with every who I meet
Refried confusion is making itself clear
Wonder which way do I go to get on out of here?”

Not even close. Mac Rebennack, studio musician, guitarist, pianist extraordinaire, plus writer of immortal tunes such as Right Place, Wrong Time; Such a Night; I Walk on Gilded Splinters. A New Orleans legend, famous around the world. He will be missed.

Not even close. Mac Rebennack, studio musician, guitarist, pianist extraordinaire, plus writer of immortal tunes such as Right Place, Wrong Time; Such a Night; I Walk on Gilded Splinters. A New Orleans legend, famous around the world. He will be missed.

Thank you, I’m not an idiot.

The two of them parlayed bizarre personae into their stage appearances, which is not a common thing. You could add 1970s Tom Waits to that group.

They even did an Xmas music video together, because some producer saw the similarity. It was very good.

Damn, that makes me sad.

So it’s time for me to tell my story about Dr. John. In spite of this story, I am a big fan.

It was the 1960’s. I was dating a girl whose cousin, Steve, was the road manager for a group called Crow, which was touring with Dr. John, then calling himself The Night Tripper. They came to St. Louis for one concert.

My GF expected Steve would call when he was in town, and probably give us tickets for the show. The night before the concert, the band checked in to the hotel, and found to their horror that St. Louis had rolled up the sidewalks before they arrived, just when they were getting ready to party. In a panic, Steve called up his cousin and asked if they could all come over to her house that evening. Sure, why not? Just because the two kids were in bed already, why should that be a factor?

I was at my GF’s house when the call came, and about an hour later, the whole band, with Dr. John and his “manager,” Charlie. They had picked up a few cases of beer along the way, and Charlie doped up Mac pretty good as usual.

After introductions all around, Mac headed for the piano and began playing a low-key, lumbering, drug-soaked blues progression, ad-libbing some lyrics. I remember a few lines like,
Well, we came to St. Louis. Boy, what a fucked-up town.
Yeah, we came to St. Louie,
And it’s a fucked-up town.
Here we are all a-hangin’,
And nothin’s going down. Yeah…

There were many more verses, but you get the idea…

Years later, I asked one of her kids if they ever remembered the night Dr. John visited the house. The oldest said he must have slept through it. How, I don’t know; it’s not like it was a quiet group in a large house.

The next night, we all went to the concert at The Armory. Dr. John was sweating profusely on stage with his faux chicken bones and feathers on a staff, but Charlie kept him upright when necessary. Steve looked at the packed and rigidly standing crowd and said, “Doesn’t anyone in St. Louis dance?”

The two of them parlayed bizarre personae into their stage appearances, which is not a common thing. . . .

I gotta bone up on my blues. I always thought “Howlin’ Wolf”, was just another traditionally wacky blues moniker. I didn’t know there was a stage persona to it. Hawkins and Brown though, yeah.

Gah, I forgot to talk about Dr. John! I saw him in the. . .geez, I THINK the early 90’s, might have been at the end of the 80’s. He was playing on a bill with Bonnie Raitt & The Fabulous Thunderbirds. Each performed separately, then jammed together. Great fun. The Doctor was not above hamming it up for laughs. When he did his solo set, it was just him and a piano, and when he started playing, there wasn’t a peep from the audience until each song ended.

I count that as one of my top three concerts of all time. So much fun. I miss going to concerts.

I once saw dentist “Dr. John”. He’d heard all the jokes. The kicker was that his first name was Robert and there was a singer by that name too.

Supposedly Mac Rebennack had closets full of sessions tapes from the last 60 years. It was like he just recorded whatever he was doing and flung it all in and closed the door. I hope someone with skill takes a look through that.

I never got to see him, alas. I hope he’s headlining at Dooky Chase in the Sky.

Here’s a great video of him playing “Iko, iko” with an overhead camera on the keyboard so you can see all the action. According to legend, he was shot in the left ring finger in a 60’s era barfight, which is when he switched from guitar to piano as his main focus. We should send the shooter some flowers. 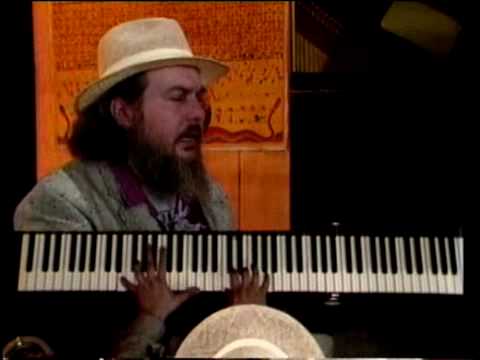 I’m a little surprised that none of the articles that I’ve seen so far have mentioned that The Muppets’ Dr. Teeth was inspired by Dr. John.

They even did an Xmas music video together, because some producer saw the similarity. It was very good.

Which lets me post a link to the best version of Frosty the Snowman not done by Jimmy Durante (I consider them a tie).

Such A Night! He was among the finest.

I’m with you. I always got these guys mixed up. Awfully nice of them to go out together to perpetrate my confusion.

Right. I always confuse Laura Nyro with Mariah Carey. I mean, they’re both women who play the piano, right?