I haven’t decided yet what to make of this odd pairing. Rodman is the last person I’d look towards as a diplomat. But Kim seems to like him. No other American has gotten an audience with a North Korean leader in decades. Isn’t the most minuscule thaw in relations better than nothing? At least Kim will have briefly met the great enemy his country hates so much.

I kind of hope Rodman pulls this game off. It’s not going to change anything but it is a beginning. If the game in January goes well then theres another one planned in June.

I have no idea where this will go. But don’t we have to at least try and get a foot in the door? 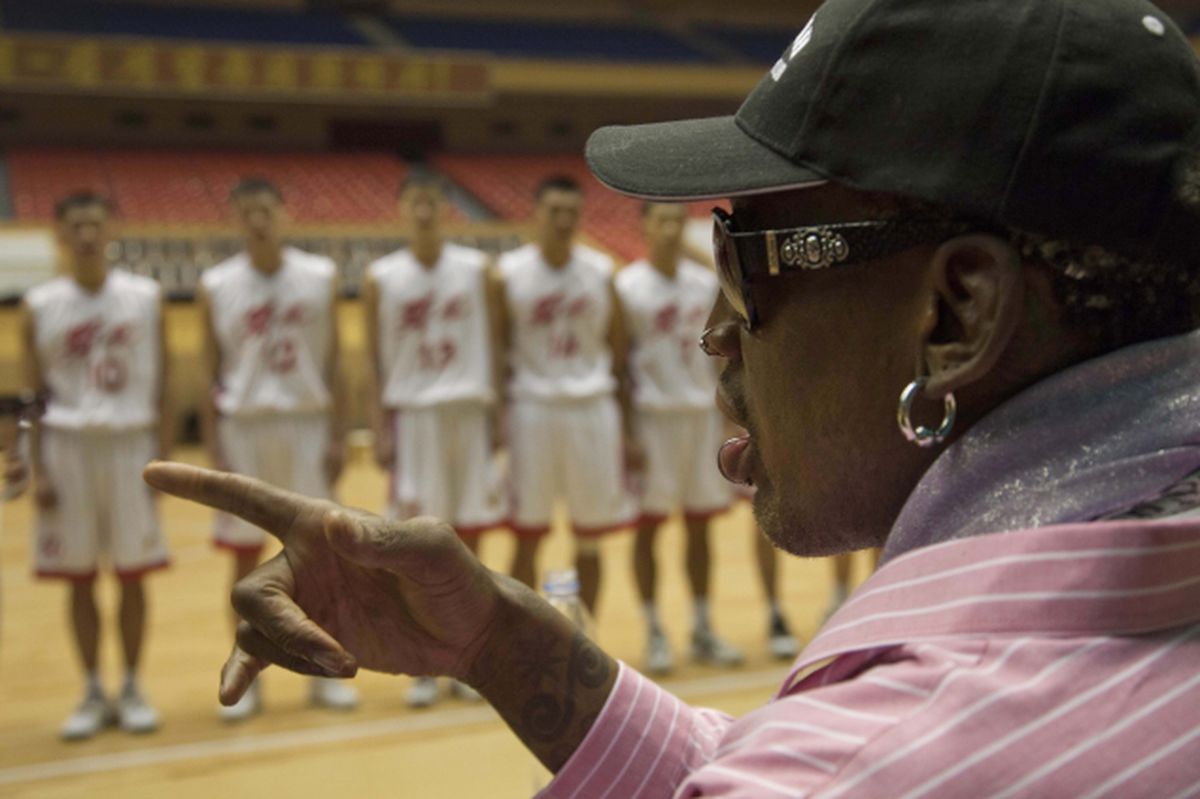 Former NBA star Dennis Rodman held tryouts Friday for a North Korean team to face a dozen NBA veterans in an exhibition game on leader Kim Jong Un’s birthday next month — though he hasn’t convinced all the players on the American team that it’s safe...

I like Rodman’s idea of a mixed team. It wouldn’t be a good idea for Americans to beat the North Koreans in the first game.

That could result in executions for the N Korean players.

Rodman and Kim have struck up an unlikely friendship since he traveled to the secretive state for the first time in February with the Harlem Globetrotters for an HBO series produced by New York-based VICE television.

He remains the highest-profile American to meet Kim since the leader inherited power from his father in 2011.

On Friday, he stressed that he hopes the game will be friendly, without political or nationalistic overtones.

He said the former NBA players will take on the North Koreans in the first half, but the teams will be mixed for the second half.

“It’s not about win or loss. It’s about one thing — unite two countries,” Rodman said.

It has some of the same feel as this: Mariah Carey performs for Angola dictator.

I have wondered if Rodman is getting paid. I can’t imagine getting 12 ex NBA guys to go over there without spending some serious cash.

What a strange way for Americans to met Kim. The former basketball star Dennis Rodman said on Sunday he doesn't feel snubbed that his latest visit to North Korea hasn't yet included a meeting with the country's leader, Kim Jong Un. Rodman is in Pyongyang to train local basketball players.

It doesn’t bother me that he’s not confronting Kim. That wouldn’t work. He’d be escorted out before he said a dozen words. I’m more interested in someone, anyone from outside the country getting to know Kim. At least break the ice a little.

This does nothing at all for U.S.-North Korea relations. Rodman’s a plaything for Kim Jong Un, that’s all.

Read this open letter to Rodman from the only known escapee who was born into a N. Korean camp.

How Dennis Rodman can help the North Korean people

According to Rodman, Best Korea is “all love”. I am not sanguine about his diplomatic skills.

I’m not that excited about Rodman either. He’s openly discussed his issues with alcohol. He claimed on Celebrity Apprentice last Spring that he had stopped. Who knows if he’s still stopped or not.

My concern is the absolute isolationism of N Korea. AFAIK none of the last three Kims has actually sat down and talked with a Westerner. I’m not sure if the Kims have talked with anybody outside N Korea except the Chinese. That’s just not working and that kind of isolationism is dangerous. That’s why Nixon reached out to China. He knew that in spite of our differences we had to get some kind of relationship started. You can’t just ignore a billion people like they aren’t there. China’s ping pong team helped break the ice.

For whatever reason Kim likes Rodman. I’ve read he may have been a Bulls fan as a teenager. If Rodman is the only guy he’ll invite for a visit. Then send him. IMHO It can’t hurt. Maybe Rodman can quietly slip a letter to Kim when the guards aren’t around.

For whatever reason Kim likes Rodman. I’ve read he may have been a Bulls fan as a teenager. If Rodman is the only guy he’ll invite for a visit. Then send him. IMHO It can’t hurt.

You can’t seriously think diplomacy or ice-breaking is going on here. The Kims love basketball and this lets them show off and portray themselves as powerful players on the world stage. That’s what this is. I doubt it hurts much, but it doesn’t help anybody else at all.

I know nothing of political significance will come out of this. Maybe the state dept can quietly debrief Rodman and learn more about Kim. Is he in charge or a puppet. Is he insane or just ruthless. Someone that’s spent time with him, watched some basketball and had a few drinks might have a few insights about the man. Basic character stuff. Obviously Kim won’t be telling his buddy Rodman anything important. We won’t be learning the missile launch codes.

Right now Kim is a complete enigma. All we know is he was educated in Switzerland. We don’t even know how old he was when he returned to N Korea.

The US is working up a character profile based on interviews with Kim’s former classmates. Anything Rodman can add will just improve the profile.

That is one chilling profile for a guy in charge of N Korea. Someone that could invade the DMZ and shell Seoul on a crazy whim.

The U.S. interviewed Kim Jong Un's former classmates and concluded he's as crazy as he looks.

The U.S. government reached alarming conclusions about the personal character of North Korean leader Kim Jong Un based on interviews with people who knew him when he was a student in Switzerland, former U.S. Secretary of State for East Asian and Pacific Affairs Kurt Campbell revealed on CNN over the weekend.

The official U.S. assessment of Kim’s character is perhaps not, on its face, very surprising. After all, the North Korean leader, like his father, certainly gives the impression of a wild-eyed despot who appears to buy into his own highly official cult of personality. But North Korea-watchers have long debated whether this is merely a pose, a performance calculated to rally North Koreans and intimidate the outside world. This assessment suggests that Kim’s antics are not entirely about rational decision-making but are at least in part driven by a personality just as crazy as it appears.

Optimism is nice, but this is goofy. North Korea still has a huge network of prison camps, behaves belligerently toward South Korea and everybody else, and then there’s its nuclear program. Anything that helps the regime, for example by giving Kim a chance to show off his control of the country, without resolving those problems is bad for everybody else. Rodman isn’t going to learn anything and he’ll have nothing to tell anybody. There are actual intelligence agencies doing that job. Rodman is a narcissist and a dope; he’s already told the world Kim Jong Un is a good guy.

Ok. There’s no way I can evern attempt to defend Rodman.

He is a loose cannon. Especially if he returns to drinking. He may get a personal visit to those prison camps if he gets drunk in N Korea and screws up.

There’s something to be said for actual diplomacy with isolated regimes, and I agree it’s better if countries aren’t totally cut off from the rest of the world. In 2000 Secretary of State Albright went to North Korea, spoke to Kim Jong Il for a few hours, and gave him a basketball signed by Michael Jordan. He and his son are both nuts for the game. But that really didn’t do any good for anybody either, so it’s kind of daft to suggest Rodman is going to bring about a diplomatic rapprochement or provide any useful information about Kim Jong Un’s personality.

He just introduced a new vodka, so I kind of doubt his drinking days are behind him.

FWIW, North Korea has always had a positive affinity towards Black Americans, viewing them as brothers in arms under the global oppression of the American Capitalist System.

The whole thing reminds me of the movie “The Toy” starting Richard Pryor. I think that’s as deep as this gets.

FWIW, North Korea has always had a positive affinity towards Black Americans, viewing them as brothers in arms under the global oppression of the American Capitalist System.

Their propaganda has taken that tack, yes. They don’t much care for black people or any other non-Koreans.

You could scarcely find a better example of the oppressed victim of capitalism than Dennis Rodman.

There is no way that Rodman will have any substantive insights into Kim’s character. Rodman is a grade-A moron with a near-total lack of judgment, as evidenced by him literally paling around with such an awful human being, and making public statements to the effect that North Korea ain’t that bad, and that Kim is kind of a cool guy.

And the whole idea of an exhibition basketball game is a loser, because I think most NBA players – some of whom are quite smart, others… eh – still have more sense in their pinkie toes than Rodman has in his unable-to-get-through-airport-security noggin, and they would refuse to be a stooge for an evil dictator. The only way the game would be a good idea is if Kim Jong Un was actually forced to play in it, thereby dispelling the mystique that he can do 720 backflip slam dunks from half court.