Ron Goulart died today, one day after his 89th birthday.

He was, from what I know, a very nice man with a very checkered career. Wikipedia lists nearly 100 novels, but that’s definitely not complete. He wrote dozens of quicky pseudonymous books for various series at a rate of a half dozen a year for the entire 1970s. But he also wrote some real science fiction, humorous when it was good and farcical when it wasn’t. After Things Fell Apart is probably his peak. His main theme was technology gone wrong and he was a half century ahead of his time on that.

He also wrote five books with Groucho Marx as the detective for the completist Marx fanatic.

To the larger world he was probably much better known as a world-class expert on comic strips, comic books, and pulps, with more than a dozen big fat books on those subjects, several of which I have and often refer to.

He hasn’t written much this century but his name was always one to look for in an sf magazine back in the day. A generation passing.

I was a big fan of his short fiction; I don’t know how many times I read What’s Wrong with Screwloose? and other stories.

And his Encyclopedia was a towering achievement, IMO.

I read many of his stories in F&SF back in the day. A very funny man.

What I really loved was “The Morning Chex Press,” a fake newspaper on the back of Chex cereal boxes.

He had the cover story of my favorite issue of F&SF, too.

A sad loss of a funny man

I think that I know him mostly from his books about comics, where for a time his name was fairly ubiquitous, and always a mark of quality. Looking at his bibliography on wikipedia, I see that he also wrote (under a pseudonym) a couple of the Marvel Comics novels back in the 1970s, which I remember quite enjoying.

His friend, fellow comic book guy Mark Evanier, describes him as “author of more books than most people have read,” which seems like a fitting tribute.

Terry Carr edited 40 books, 25 of them new, in the Ace Science Fiction Specials Series from 1968-1971. That was the finest series of sf novels released by any company as a single line. Blindfold yourself and pick one out from a pile and you’ll have a solid read. Even odds that it be a very good read. After Things Fell Apart was one title. Books by Roger Zelazny, John Brunner, R. A. Laffery, and Joanna Russ were part of it. Alexei Panshin’s Nebula-winning Rite of Passage was released there. And Ursula K. LeGuin’s all-time classic The Left Hand of Darkness was as well. Covers were by Leo and Diane Dillon, which evolved into a style that look like stained glass in an alien church. 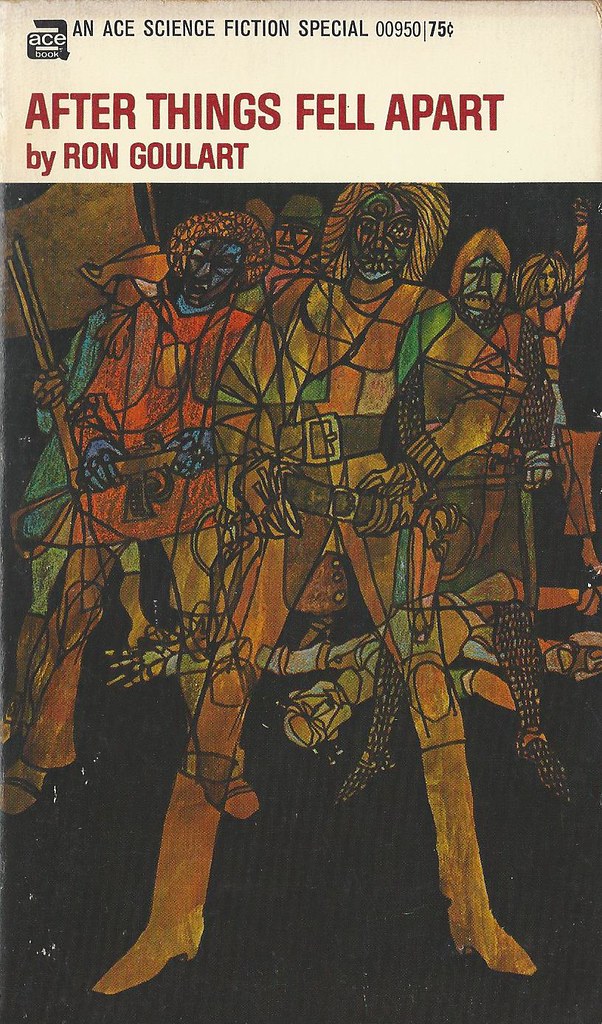 The kicker is that all these books were paperback originals. Science fiction as a genre was at such a low point that the best writers in the genre writing their best books could not get them published in hardcover. Their fan base didn’t have to money for them. All they could afford were 75¢ paperbacks, like me.

How the field survived that period is a wonder more surprising than most marvels in the books. Carr and his boss Donald Wollheim at Ace helped make a dying field so respectable that the industry had to take it seriously.

And Ursula K. LeGuin’s all-time classic The Left Hand of Darkness was as well.

And A Wizard of Earthsea also. I was in high school when these started coming out, and I bought every one, and was almost never disappointed.

I counted 15 Goulart books on my shelves, and that does not include his books on Pulps and his books in The Avenger series which were as good or better than the original pulps.
We’re losing them all, aren’t we?

Aw gee. I’ve read a bit, though not a lot, by all three of these writers.