There was mention of trailers in the retirement thread, I’m not ready to retire, but am thinking about upgrading for tent camping. I understand some want amenities, but a teardrop is what I am leaning towards (easy to tow, can even move around by hand).
There are plenty of boutique makers. I made a kayak from a kit, but no teardrop kits I have found jump out at me (not quite handy enough to build one from scratch) There is the possibility of getting a bare bones Road Toad and upgrade it personally to suit my desires.

Hop In - Hit the Road With the Toad!

Anyone have a teardrop or other small trailer (Scamp?). Heck this thread is for the other end (5th wheel) as well…

but a teardrop is what I am leaning towards (easy to tow, can even move around by hand).

/subscribing. We looked quite a lot at teardrops, but our 2017 Forester has a towing capacity of 1,500 pounds, and that wasn’t enough for the ones we were interested in. I’m curious about any lighter ones that get mentioned.

The Road Toad is very light:

With up to 600 lbs. of gear and cargo, your Road Toad can still be towed by vehicles with only a 1000 lb. towing rating. (The average camping couple brings about 300 lbs of gear)

Here are the TC specs:

I’ll look at it k but is this one you like, or just one that meets the specs?

I have no personal experience, but have watched quite a few videos and looked at many websites I have seen Camp-In (made by the same folks as Road Toad) and T@G in person.

I’d like to get a trailer of some sort, but I don’t have anywhere that I can keep it without paying extra. And I’d need something with two beds and a bathroom with shower. So it gets big and expensive

If anyone knows of something Tardis-like that fits that, I’m interested in learning more. Bonus points if it’s a pop-up of some sort that I could fit in my garage next to my car.

Welcome to the club, y’all! We’ve gone from renting (first experience cost $1100 to rent, and $800 to repair the damage I caused to the awning when I didn’t notice a tree branch. To owning a pop-up, a Toy hauler, and now a monstrous toy hauler.

With the exception of the last, because I learned my lesson, we had inadequate two vehicles at the beginning of each trailer.

It is trivially easy to overlook the true weights of the things you take camping. The single most important number is the one on the sticker in the door that says ‘payload’…that’s people, their stuff, and the weight of the hitch. How the trailer is loaded can be a factor, and even if your truck can haul a load, if it’s at 100%, your tow vehicle ain’t gonna be happy. 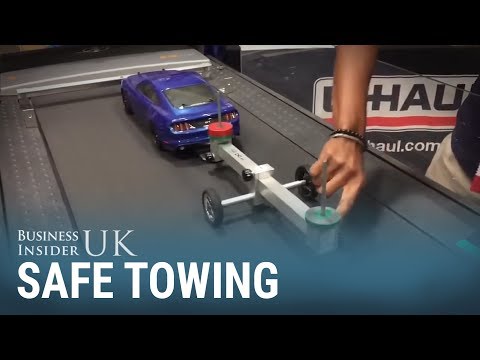 That’s not to say you can’t get some good camping in the meantime, just realize MANY people have found a trailer they think their TV can haul…then end up with a bigger TV.

Ironically, the smaller trailers are MORE expensive for what you get, because they’re building them to a demographic with smaller vehicles. The Salesman will lie through their teeth and sell their grandma down the river…of course your truck can pull this baby!

Trailers depreciate like a rock. I say this having made a profit on our last trailer…but that’s because of COVID and a Really Weird market. I’m betting that’ll never happen again. Salesman will tell you that, for only $2.45 a day, this baby can be yours! But you’ll be paying off a loan at year 12 for a trailer that fell apart in year 10.

There are some smallish trailers with bathrooms/showers, like the aforementioned scamp, the TAB 320 or 400, and the Little Guy Max. I think most pop-ups also would have two or more beds and I think some have a bathroom, but I have not researched those much.

Yeah, camping, at least for me, turned into a real progression. I was never into backpacking, mainly because I prefer somewhat more than a very minimal amount of creature comforts, like food in cans, an ice chest full of cold items, etc. In my 20’s I did a lot of canoe camping which allowed me to carry 100lbs +/- of gear but still involved sleeping on the ground in a tent. But once I got married and had a couple of kids, my days of canoe camping were effectively over.

Then, when I hit 50, I took my then teenaged son for a weekend camping/fishing trip and discovered that the ground had gotten much harder in the 20+ years it had been since I had last slept on it. So I immediately procured a small pop-up trailer that I could pull with the family minivan. That worked well for the years that my son and I camped and fished together, but then he went off to college and I lost my camping/fishing buddy.

Fast forward a few years and a divorce later and I meet the new love of my life who (unlike my previous wife) actually enjoys the outdoors, travel, and having new experiences. So we break out the old pop-up and off we go adventuring. Only to find out that setting up a pop-up camper works much better when you have a nimble teenager around to do the crawling underneath to set the stabilizer jacks and prop-rods for the pull-out sections. And my son and I never had any problems with the fact that the pop-up didn’t have any sort of bathroom, after all there was usually an handy nearby bush that needed watering for those late night calls of nature. But that generally doesn’t work so well for female companions. Time for another upgrade!

I am now the proud owner of a 2017 Cherokee Wolf Pup 16FQ camper trailer. It is the perfect size and configuration for me and my missus. It’s 16’ of usable interior space (21’ overall length) with a queen-sized bed, 2-person dinette, 2-burner cook top, small refrigerator, microwave, and most importantly, a full bathroom complete with stand-up shower. It doesn’t have any pull-out slides (less maintenance/potential points of failure, and easier setup) and weighs in right at 3000lbs dry weight and pulls quite easily with my 1/2-ton pickup truck. The thing we like best about this trailer, besides the full bathroom, is that it’s the only one I’ve ever seen with the bed oriented lengthwise with just enough space on each side for both of us to be able to get out of bed in the wee hours of the night without someone having to crawl over the other. It’s small enough and light enough to go just about anywhere and very quick and easy to setup once on site.

We looked at quite a few other brands and models before finding this one and instantly falling in love with it. The biggest drawbacks for the teardrops and other smaller trailers for us (of course YMMV) were lack of sufficient space to stay inside comfortably if so required by bad weather and, if there was a bathroom at all, it usually had a shower that consisted of sitting on the toilet seat and using a hand-held shower head on a hose. That just didn’t work for us. And the really small teardrops are essentially just a bed and maybe a few storage cabinets inside without even enough room to stand up and get dressed inside. They are (to me) just a hard-shelled pup tent with a slightly more comfortable mattress. They may be great for sleeping in, but everything else happens outside regardless of the weather.

Summing up, we LOVE our Wolf Pup. It suits our needs, and we have already camped in it pretty much everywhere from Texas to Maine with the exceptions of Florida and the Great Lakes region. And now that I’m retired, we will have all of the states east of the Mississippi River done by the end of 2023 and started making a dent in the western states as well. We’ll see how it holds up over the long haul, but so far so good!

Your Cherokee Wolf Pup 16FQ camper trailer looks great! Initially it looks too big for me, but the Q bed and standup shower and bathroom you describe sounds like a winner.

I’m renting, to try them out and see if my wife and I like traveling that way. We may eventually buy, and we may not depending on how we like the “rhythm” of road tripping with an RV trailer.

How small do you consider to be small? There’s a 13’ Scamp model that comes in around 1200 - 1500lbs that has a floor plan with an almost queen sized bed and bathroom option. R-Pods by Forest River are another option we looked at, but never found a layout that worked for us. What size tow vehicle to you envision using? You can either look for a camper you can pull with your existing vehicle, or get a camper you like and a tow vehicle big enough to pull it with. And if you’re pulling anything heavier than a smallish pop-up camper I also highly recommend adding an electric brake controller to your tow vehicle (and electric brakes on the camper) if they don’t already have them. Having the proper towing capacity is one thing, being able to stop while pulling a load, especially while going downhill or in panic situations is a whole 'nuther matter.

I have a small Jayco Jayfeather that I love. I bought it used for 4K just before covid and I couldn’t be happier. It’s comparably light for my truck to pull. It has pop-out beds under canvas (A Queen and a Double). It has the utility of a much larger trailer but in a smaller package. I have a bathroom for the middle of the night. I have a refrigerator so I’m not dealing with coolers and ice. I have a microwave, a small stove, and a sink for cleanup. I pack memory foam toppers for the beds and added a real faucet to the sink.

Looks interesting, thanks. I’m looking at their website (the 13’ Scamp).

For everyone talking about queen size beds in a trailer, be aware they’re probably “RV Queen” which is a few inches shorter than a standard queen. If you’re taller than about 5’10" this may be significant to you.

I had a 33’ long trailer and even that monster had an RV queen and my feet dangled off the end.

These things are made light and cheap, so you’re balancing depreciation with life expectancy.

Looks interesting, thanks. I’m looking at their website (the 13’ Scamp).

My parents had a 13’ Scamp and it’s a nice, lightweight trailer. A cousin, who has had both, recommended the very similar Casita instead, saying it was better constructed.

I found an interesting large teardrop, with a Q bed and a wet bath. I mentioned the TAB 400 above, but I wasn’t sure of the bed size (I think you can do 1 or 2 beds). Thanks for the link.
Looks like the Little Guy Max also has a queen: 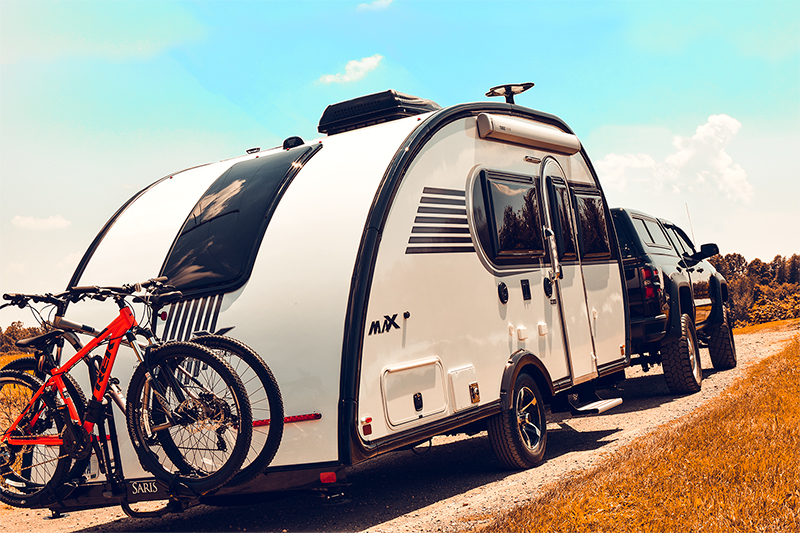 Starting at just 3,010 pounds, the Max comes standard with an abundance of deluxe features and a refined exterior style. With an impressive 6’7” interior height, the Max’s versatile cabin space incorporates lush materials to sleep and live...

The mini and micro max also have a convertible queen, up to the buyer if puzzle beds are ok (seems clever but possibly a pain to me)
Note also the micro max does not have a shower, but there is a cassette toilet option.