Should I get vaccinated against Polio? I was when Sabin vaccine came out

When the safe Sabin vaccine came out, I got vaccinated. It was great fun, a huge crowd lined up outdoors to eat the sugar cube. That was about 60 years ago, and I think I only got the one dose.

Now, according to a CNN article, “The CDC recommends children receive four doses of IPV. The first is given at 2 months of age, the second at 4 months, the third between 6 and 18 months old and the fourth between 4 and 6 years old. Adults who have never been vaccinated against polio should receive three doses of IPV. The first should be given as soon as possible, the second one to two months after that and the third six to 12 months after the second.”

Since what I remember comes nowhere near the number of doses they’re describing, should I be getting vaccinated again? Elsewhere in that article they say vaccination probably gives lifetime immunity.

This may be the question of the day. Judging from how the disease virtually disappeared after years of vaccinating the public is, in my opinion, an indication that once is enough. I hasten to add that I have no cites whatsoever upon which to base what is only an opinion, but that’s the feeling I have.

This is a question you should pose to your PCP. For most older adults, the single dose we got as kids is sufficient, but your doctor may want you to get boosted for some reason. Don’t trust a message board with your health.

I believe you got the live vaccine, (opv) and the dosing for that may well be different from the dosing for the inactivated vaccine (ipv) which is currently used in the US. That being said, when i visited Africa i was advised to get a polio booster.

You could ask your doctor if there’s a blood test you could do to learn your immune status. Or you could just ask your doctor to revaccinate you. I don’t know what’s typical, but i had no symptoms from my booster.

Also, MODERATING, since this is a medical question, I’m moving it to IMHO. There’s overlap between factual and medical questions, but this board wants to make it clear we don’t supply qualified medical advice. So off to IMHO we go.

I was born in '46 and received the first Polio shot offered, perhaps mid '50s. I had to take a trip to Saudi in the mid '90s and the company provided an oral vaccine before hand. It kind of surprised me.

BTW, when I went to donate platelets a month or so after my return I was told that Saudi was a Malaria area and I had to wait 6 months before donating again.

I was born in '56. I assume I got a polio vaccine at some point, but I just don’t remember. I do remember lining up for some kind of vaccine, and the older kids trying to frighten us younger kids by describing the torturous device they’d use to vaccinate us. This would have been the early to mid 1960s, I think, by my memory of the part of the playground where we were lining up.

and I think I only got the one dose.

Most kids got three or four in the ‘60s. You likely did.

You may be able to check.

Are your polio shots up to date? It may be harder to tell in some states....

About half of states let people request or view their immunization records online, but others rely on fax or mail or leave it to health care providers.

You would have needed it in order to go to school. However, if you are in doubt, ask your doctor.

I got vaccinated in kindergarten or first grade in 1957 or so. Since we got vaccinated in school, I have no idea of where I’d get an immunization record. I don’t recall a booster before I went to Africa in 1961 though I got every other vaccine known to man at the time.
I think the cases found so far, and no doubt the evidence of polio in the water, come from the unvaccinated. I personally will only worry if vaccinated people start getting it.

Salk vaccine was first, and it used a killed virus in the vaccine. It required boosters.

Sabin vaccine uses a live virus, and when it first became available, it was three doses a month apart, IIRC. It was given on sugar cubes. Now it’s a liquid dose that is squirted in the mouth.

There have been instances of people who never received any polio vaccine whatsoever. Then, when caring for their infant children who had gotten the oral polio dose, they were infected with polio by changing the child’s soiled diaper. Salk vaccine is live virus, and live virus is shed through the feces as the immunity develops.

Some studies have shown the Salk vaccine provides more protection, and there’s discussion about returning to it.

I used that site that DSeid’s article links to to request my records. I wasn’t sure if it wanted my maiden name (under which of course I would have received vaccines way back then) or my current married name. I filled in my maiden name as the “patient” and my married name as “requestor”. We’ll see what happens.

The polio virus in the New York water supply probably came from somebody who had received the live polio vaccine, and was still shedding the virus in their feces.

I don’t remember ever getting a vaccine in a sugar cube, but I do remember the little pink capsule that was squirted into my mouth (and the nurse gave me a sucker and told me not to eat it for 10 minutes) and dispensed quite a few of them as a free clinic volunteer in the early 1990s.

The Sabin (live oral) vaccine is no longer used in the United States, after enough immune-compromised people (steroid use, chemotherapy, organ transplant, AIDS, etc - all things nobody could have predicted in the 1950s) contracted polio, the disease, from someone who had received that vaccine.

By “steroid use”, I mean drugs like prednisone, not necessarily anabolic steroids abused by bodybuilders, although those also do a number on the immune system.

As to how many doses I got, I remember what a big deal it was, with long lines of people waiting outdoors. More recently I looked it up on an online historical newspaper site, and there were two dates (IIRC about a week apart in 1963) on which they were giving the sugar cube vaccines. But I do think it was just the one dose.

I do remember lining up for some kind of vaccine, and the older kids trying to frighten us younger kids by describing the torturous device they’d use to vaccinate us.

Almost certainly Smallpox,
The first-generation and second-generation vaccines were administered by multiple puncture of the skin (scarification) with a bifurcated needle that holds vaccine solution in the fork.

The smallpox vaccine is the first vaccine to be developed against a contagious disease. In 1796, the British doctor Edward Jenner demonstrated that an infection with the relatively mild cowpox virus conferred immunity against the deadly smallpox virus. Cowpox served as a natural vaccine until the modern smallpox vaccine emerged in the 20th century. From 1958 to 1977, the World Health Organization (WHO) conducted a global vaccination campaign that eradicated smallpox, making it the only human di...

But I remember the TB test (1970s) was being poked with something that looked like a push-pin, 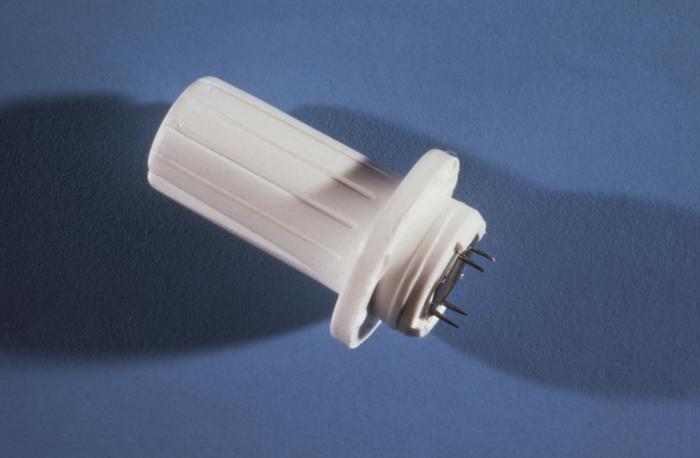 The tine test is a multiple-puncture tuberculin skin test used to aid in the medical diagnosis of tuberculosis (TB). The tine test is similar to the Heaf test, although the Mantoux test is usually used instead. There are multiple forms of the tine tests which usually fall into two categories: the old tine test (OT) and the purified protein derivative (PPD) tine test. Common brand names of the test include Aplisol, Aplitest, Tuberculin PPD TINE TEST, and Tubersol. This test uses a small "button...

Which, for a kid, is equally torturous.

I remember that, and it was much worse in the imagination than it turned out to be.

The oral polio vaccine on a sugar cube when I was a kid was three doses.

The squirt-in-the-mouth “kool-ade” that my kids received was two or three doses.

They may have been thinking of the jet injector, which administered vaccines with compressed air. I don’t think I ever got a shot that way, but my school did offer a vaccine when I was in 5th or 6th grade; I didn’t take it because IIRC I’d already had the disease, but most of my class did and they all came back with bruises from it. A jet injector is a type of medical injecting syringe device used for a method of drug delivery known as jet injection, in which a narrow, high-pressure stream of liquid penetrates the outermost layer of the skin (stratum corneum) to deliver medication to targeted underlying tissues of the epidermis or dermis ("cutaneous" injection, also known as classical "intradermal" injection), fat ("subcutaneous" injection), or muscle ("intramuscular" injection). The jet stream is usually generated by the p...

Almost certainly that was in 1976 for the Swine Flu.

No, it would have been before that. I was in 8th grade when the Swine Flu thing happened. I remember it well because it was a few months after Legionnaire’s disease was first identified. Yeah, I was 12/13 but I was interested in things like that.