Can anyone tell me the make, model and year of the car that Richard Pryor’s character stole in the movie “Silver Streak”?

I don’t remember anything about the film, but do any of these vehicles ring a bell?

I don’t remember the film that well, but a little googling says it was a Jaguar E-type.

It was definitely a Jaguar of some sort. At one point, after the train has been stopped and a gunfight occurred, Grover (Richard Pryor) is asked if the federal agents can drop him anyplace. Grover lights a cigar and replies, “I left my Jag in Kansas City.”

A really beautiful sighting was in “Silver Streak”. Though not a dhc (and just a 2+2 at that) the series II that Gene Wilder and Richard Pryor stole was a red beauty. One particularly fetching scene showed them rounding a turn in some flatland in Kansas I think. Plus, you have to give Richard Pryor’s character credit. Towards the end of the movie he’s asked by the feds if they can take him anywhere. To which he replies, “Well, I left my Jag in Kansas, City.” [caw]

On the Silver streak, Gene Wilder complains to Richard Pryor about stealing the JAG. Richard’s response is a classic, which I can’t reprint.[lm]

From a jag site.

[Grover is attempting to hot wire a Jaguar]
*Grover Muldoon: I’m following the plan. Just changed my mind.
George Caldwell: Are you crazy? I thought we were gonna take the Chevy in back.
Grover Muldoon: Chevy? That’s a jerk-off, man. This here is pure pussy.
*

That’s in the middle of the movie though, IIRC, Pryor steals a Fiat from the station in Chicago at the end.

and I do recall correctly 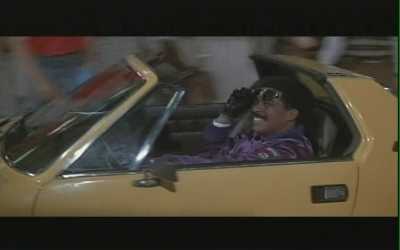 For further confirmation (as well as the various other cars in the film) you can look at the listing on the Internet Movie Cars Database.

That’s in the middle of the movie though, IIRC, Pryor steals a Fiat from the station in Chicago at the end.

He deserves that (and more) just for enduring Gene Wilder’s “brother” routine in KC.

He deserves that (and more) just for enduring Gene Wilder’s “brother” routine in KC.

To be fair, it was Pryor’s idea, and he pushed it even though Wilder said he couldn’t pull it off.

But does it come with whitewalls?

What do yo think this is, a western?

Wow, I really appreciate all the help. I didn’t realize that I wasn’t the only one that didn’t know the year. I have always assumed (I know, I know) that it was a '64 or '65 XKE. But, when I have tried to find out for sure, there doesn’t seem to be anywhere that tells. Now, do I assume(again, I know) that it might be a "76? Anyone?

This is a type of car where the particular year tends not to matter. Unlike American manufacturers who had style/design changes annually, European manufacturers typically kept things the same (as much as possible) for a given model over a period of many years.

Probably the most significant changes were for federally mandated emissions controls. The British manufacturers generally handled those poorly, to where earlier was better (e.g., '67 model preferable to '74).