So is Ketanji Brown Jackson getting on the Supreme Court or not?

Forgive an elementary question: to what extent does this matter? To my understanding, associate justices all have equal status. Their seniority on the court determines things like who gets to write opinions and who gets to speak first, but otherwise they all get a vote. Does it make any difference whether Justice Jackson would be replacing Breyer, or a hypothetical Thomas vacancy?

It would matter in the sense that the court would be 5-4 conservative instead of 6-3 conservative. Yes, Republicans would have another hissy fit, there would be a greater chance of a 50/50 split instead of 53/47, and the possibility of losing Manchin or Sinema. But unlike when RBG died, Breyer still being there would mitigate the risk of those things happening.

Of course this is hypothetical and I don’t really expect Thomas or one of the other conservative justices to die in the next few weeks.

Arguably the best scene from my favorite movie.

The Constitution literally says in plain language that a person has the right to an attorney. If a defendant cannot afford an attorney, seems to me the state has to provide one.

Under the Fourth Amendment must the government provide a house that may not be searched without a warrant?

The 6th Amendment says a person has a right “to have the assist­ance of coun­sel for his defense”.

The 4th Amendment doesn’t say you have a right to have a house.

No more than the 2nd Amendment says you have a right to have a gun.

There are two ways to look at this:

When 150 years of conduct shows that #1 was really the thing, why does the Warren Court shift to #2?

Under the Fourth Amendment must the government provide a house that may not be searched without a warrant?

No, because the Constitution doesn’t say you get lodging. It does say you get due process. How can you have a fair trial if you don’t have a lawyer? Many things must be arranged for due process.

How can you have a fair trial if you don’t have a lawyer?

Easily. Even the homeless have the right to not be searched without probable cause. If the amendment said that every person has a right to a house in which they can store their effects without fear of their being searched, then you might have a point, but it doesn’t.

But if you look at Gideon v. Wainwright, much was made about the disparity about how a poor person could not afford a lawyer but a rich person could.

That is the criticism of the Warren Court. A rich person can afford a house or can afford private security that prevents a person (or the police) from knocking on your front door, or getting close enough to hear an argument or toilet flushing to manufacture probable cause. Their opinions were worthless and inconsistent and have left society with a hodgepodge of “protections” which have turned out to be worse than anything before.

There are two ways to look at this:

When 150 years of conduct shows that #1 was really the thing, why does the Warren Court shift to #2?

Because #2 is the best way to provide due process?

The US criminal justice system is based on the proposition that it is better for 10 guilty people to go free, than for 1 innocent person to be wrongly convicted. Your option #1 inherently cannot put that into full practice by its very nature.

The Warren court was, by and large, an unconstitutional mess, but Gideon v. Wainwright is one of the very few things that they got correct.

The Warren court was, by and large, an unconstitutional mess, but Gideon v. Wainwright is one of the very few things that they got correct.

Why not an O.J. type Dream Team, with investigators and paralegals and 24/7 staff, for an indigent defendant? A rich person can afford it, so why shouldn’t the state provide it? And why is that in the Constitution?

Why not an O.J. type Dream Team, with investigators and paralegals and 24/7 staff, for an indigent defendant?

The federal government provides nothing for it. It’s an unfunded federal mandate. Not all states are the same. Here’s a web site discussing the issue. 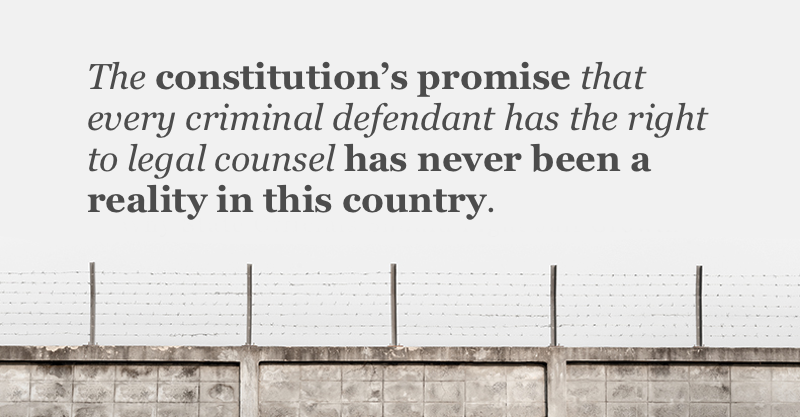 We suggest a few questions to ask to assess the strength of your state's public defense system.

So you can take this up with your local government.

I must say, I hadn’t expected the argument that the legal system isn’t sufficiently stacked in favour of the wealthy.

This type of statement is instructive when we are discussing constitutional theory. Whether and to what level the playing field should be equal between rich and poor in the legal system is an interesting political question, but one which the Constitution has nothing to say. Observing that the Constitution takes no position on it does not mean that the observer believes that such a situation is good.

So you can take this up with your local government.

Your option #1 inherently cannot put that into full practice by its very nature.

If seeking the truth is really the function, I think the totality of the Warren Court’s jurisprudence has messed that up incredibly, far beyond a right to representation. What it has done is effectively not allow him a voice at all as he must plead or else face a draconian penalty.

If we want to make the system more equitable to rich and poor, we require all defendants to use a public defender. Without being able to hire additional defense attorneys. The public defender’s office would get much better funding in that environment.

I am trying to figure out where this hijack started. It appears pretty far back and the subject of the OP seems to be done. I’m going to leave this mess closed.

The Warren hijack can be started as its own thread if desired. But it isn’t worth the effort to break it out of this one.

Of note the Romney for President part was also a hijack. THankfully that died off on its own.