So there was a raccon acting strange in my yard yesterday

Yesterday was a pretty cold day here in Michigan, still frost on the ground when the baby got me up to begin our day. I put my male dog Trogdor out on the run and started the morning ritual of diaper changes and breakfast. He wasn’t out there more then a minute or so before he started barking, I assumed to come in. Trogdor hates the cold and does not spend much time outside unless he can bask in the sun. When I went to bring him in and switch him with our female Chloe, I could see he was not barking to come inside but was on the end of his run barking at the wood line. This is not super unusual we live on an partially wooded acre on the fringes of a very small town. I see rabbits and other small critters in my yard almost daily with the occasional deer or turkey thrown in for good measure. We also have some feral cats in the area.
I called Trogdor in and put Chloe on the run, she instantly ran to where he was and started barking, before she even took her morning pee. This got me curious and I walked out to see what the commotion was, in my yard was a smallish raccoon, probably ten pounds or so. The raccoon did not appear to have diminished motor skills, and did not appear to be injured, but she had zero fear of me or my dogs. She also seemed aimless, she would walk a little ways one way, and then the other but never left basically a 15 foot square. Seeing a raccoon wandering in the daytime is pretty rare, but her lack of fear creeped me out.

A friend who lives in a wooded area near a river had to stop feeding birds because raccoons came up on her deck – in the daytime – and ate all the food. They can become quite accustomed to people.

It might be worth checking with your local DNR to see if rabies is a concern. It’s good that the dogs didn’t want to engage it.

I looked up my local animal control office online but they did not open until 11 and it was only about 9:30am. So I called the police department non emergency line and explained what was going on. I don’t think the dispatcher on the phone wanted to deal with such a silly non emergency, and asked if I was outside of city limits. The subtext of the conversation being “why don’t you shoot the thing yourself”. When I explained that I was still technically inside of city limits they promised to send an officer out. Of course the other fun side effect of being in a small town is that I personally know a good percentage of the police force. I’m sure much merriment is being had at my expense right now.

When the officer shows up about fifteen minutes later, I am wrist deep in baby poop, because as we all know babies have impeccable timing. I point out the raccoon to the officer and go back inside to finish my Augean task. As I’m finishing the baby up, the officer shoots the raccoon twice, and comes back to talk to me. She tells me that she hit it, and it is still moving but that it will be dead soon. Just wait for a little bit, and double bag it in the trash or bury the little fella. The officer agreed that it seemed sick and so she put it down. The officer also asked me if I had a shotgun in the house. At this point I get the message that I should just deal with this stuff myself in the future.

Two hours go by and a buddy comes over to visit, I tell him the saga of my interesting morning and he agrees to help me bag up the raccoon. As we walk out into the yard I don’t see the raccoon in the same spot anymore, we step into the treeline and we see it about 10 yards away halfway down a little ravine. The poor little thing is still alive. At this point I feel terrible, sick or not it should have had to suffer for so long with multiple gunshot wounds. I run back to the house and grab a .22 and shoot him in the head from about ten yards away. The raccoon at no point during this whole escapade acted aggressive or scared towards any other creature. It would look at you when approached, just sitting there and staring. After a few minutes of waiting for all movement to cease, we came back out to bag the poor thing. We applied the very scientific “poke it with a stick method” to ascertain that it wasn’t a zombie. My buddy picked him up with a couple of tree branches while I held the garbage bags. At this point I notice besides my head shot there were no other bullet wounds on the poor guy! The cop in question had not only missed two shots from very close range, she thought she had hit him. We tied up the bags and dumped him, ending our saga.
Questions: 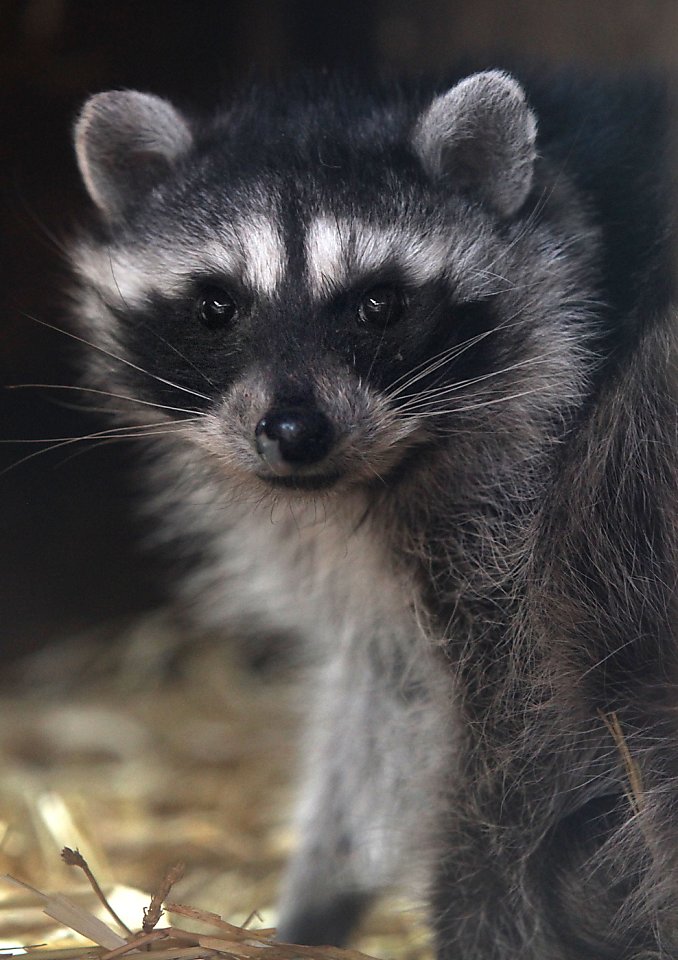 WILDLIFE Fatal disease that causes animals to become listless and unafraid of people is...

“Most of (the diseased raccoons) are very quiet, actually, not aggressive,” Pesavento said. “They kind of walk in circles quietly, they’re not scared of you.”
That is pretty much dead on from the sounds of it. The thing that was making me doubt rabies, was that there did not seem to be diminished motor skills.

Yeah, saw one of these poor little guys a couple years ago. Seemed a little hesitant, confused, and not at all scared. I asked about it and was told it is becoming a lot more common here in the midwest. Last couple years it seems like the number of raccoons I see as roadkill has gone up very dramatically and I’ve wondered if the virus affecting more and more of them is the cause.

Wow, right after a Big Bang Theory episode where Bernadette describes a scary new virus able to jump from raccoons to humans! I wonder if the writers have been reading these articles.

Poor thing lost it’s keys, was walking back and forth looking for them, and you had to have it shot.

Interesting. A couple of years ago there was a raccoon in a neighbor’s driveway acting like that. I assume that it had been hit by a car and called animal control. I didn’t see any blood or sign of injury, just continual movement in a small area in the middle of the day.

Never mind the raccoons, you have a dog named Trogdor? What kind of burninating does he get up to?

There is a parasite Raccoons can carry that is mostly harmless to them but can be very dangerous to humans - http://en.wikipedia.org/wiki/Baylisascaris

Best not to get too friendly with our woodland buddies without proper protective gear.

I wanted to comment upon your dog’s name but was ninjaed by a zombie.

There is a parasite Raccoons can carry that is mostly harmless to them but can be very dangerous to humans - http://en.wikipedia.org/wiki/Baylisascaris

Best not to get too friendly with our woodland buddies without proper protective gear.

Another reason to hate those evil things. Still not as bad as deer, which are the kamikaze pilots of the animal kingdom.

Trogdor sticks to villages and peasants for his burninating, so far his attempts to burninate feral cats and raccons have been failures.

Why didn’t you insist the officer finish it off??

It’s a myth that raccoons seen in the daytime automatically have something wrong with them. Mothers nursing babies have high caloric needs and will often seek food during the day. I realize that wasn’t the case here.

Distemper is a virus that can be transmitted to dogs and raccoons (and others, like ferrets). It starts with flu like symptoms in the animal, leading to dehydration, and progresses to neurological symptoms including blindness, motor problems, inflammation of the brain, and paralysis. Eventually, the animal will usually have seizures, if they aren’t treated earlier. Unfortunately, “treated” usually means put down. There’s no real treatment and it’s almost always fatal.

Animals with distemper, but before the major symptoms show up, are listless, exhausted and just kind of out of it, with runny noses and mucous discharge. In the later stages, they might have rages, the way animals with rabies do, but it’s not as likely.

There’s a vaccine for distemper, fortunately. If your dog’s not up-to-date, I’d get him to the vet tomorrow.

I found a raccoon once that was suffering the later stages of distemper. I knocked on doors until I found someone to help me. Then we scooped the poor beastie into a bed sheet, and then into a duffle bag. I carried it back to my dorm and called animal control. In retrospect, that probably wasn’t my best play but this was thirty years ago and I didn’t have a phone or a gun in my back pocket.

I hope you have a word with your cop friends about the officer’s lousy aim.

The dogs should be up to date on all of their shots, I will have to confirm that with the wife that that’s the case. I didn’t make her finish off the raccoon because I was in the house when she shot at it, and by her attitude I assumed she had hit it in its vitals. Even with a solid kill shot you are going to get some thrashing and involuntary twitching for a minute, and I assumed that’s what she meant. Im not going to complain to anybody about it, I cannot see what good that would bring anyone. The cops I know are not what I would consider friends. We went to the same high school within a grade or two of each other and played on the same sports teams. So more of smile and nod of recognition when we pass each other type of aquaintence.

Still…a cop shot at…and failed to hit…a potentially dangerous/diseased animal, told you she hit it, and left the scene. That’s a problem in my book. If the animal needed to be shot, she should have made damn sure she finished it. I’d report her in a heartbeat. And keep a shotgun handy to tend to such things yourself in the future.