Speaking of Spain (a culture question).

I heard on the tube last night that Spain is culturally pretty progressive. They allow gay marraige, abortion, and other freedoms. And there women in very high places. My brother was there fifty years ago and he said just the opposite was true, largely due to the catholic church.
How far ahead of us are they?
Peace,
mangeorge

A lot has changed in 50 years, even here.

Actually, Spain has one of the most restrictive abortion laws in Europe. Issues like abortion and gay rights remain very controversial in Spain. Under Franco, strict adherence to Catholic dogma wasn’t just cultural, it was also enforced by the dictatorship – homosexuality, divorce, contraception and abortion were all outlawed. The Church became a legitimizer of his rule, as well as a vehicle for social control. Extricating the Church from civil governance has been a major issue in Spain’s democratization since 1975.

I think their drug laws are considered pretty progressive.

No.
Spain was the third country in the world to legalize SSM. Link.

Dear Nava will be along shortly.

When Franco finally died, the King was reestablished on the throne and a massive reaction to fascism began (albeit with some fits and starts). I presume the modern liberality of Spain is thus explained.

When Franco finally died, the King was reestablished on the throne and a massive reaction to fascism began (albeit with some fits and starts). I presume the modern liberality of Spain is thus explained.

No.
Spain was the third country in the world to legalize SSM. Link.

And as your own link states, SSM was only legalized in Spain three years ago (by a vote of 187-147), is a sticking point between the two main political parties, and is still being litigated in the courts. Just because Spain has made progress on this front (and SSM is not coterminous with support for gay rights), does not mean that it has been or remains non-controversial.

I was there about 20 years ago. At that time it was still considerably more conservative than the US in many ways. Abortion was only legal in cases of rape, incest, or danger to life of the mother. Women were defined very much by their attractiveness and role as homemakers and discrimination against them in employment was culturally acceptable (not sure about the exact laws, just what I saw). Teens had a ridiculous lack of sex education. As far as I can tell, nothing was taught in schools about contraception. Racial discrimination against gypsies and African and South American immigrants seemed stronger than racial discrimination I was familiar with in the states.* It was common to refer to those groups by epithets in general conversation.

Attitudes about homosexuality among urban teens seemed about what they were in the US back then, IME not as liberal as they are now.

Attitudes toward drinking and drug use seemed more liberal to me. I remember being seriously freaked out when I saw some folks passing around a joint on the line to get on a ride at the amusement park. Not something I could picture happening at Disney. Attitudes about women’s breasts being visible on beaches or in an artistic context were more liberal, but that’s a little misleading. A woman could still be judged pretty harshly for wearing something too revealing in everyday life. Prostitution and extramarital affairs were more acceptable for men than they are in the US, but that was a double standard, IMHO, not a sign of progressiveness.

Just because Spain has made progress on this front (and SSM is not coterminous with support for gay rights), does not mean that it has been or remains non-controversial.

Of course it’s controversial. It’s controversial in pinko liberal Sweden (my country). The thing is, your post made it out to be a more controversial issue than it really is. Franco’s only been dead 33 years. There are too many people still around who want those good old days when women couldn’t get a driver’s licens or a passport. Turning around one of Europe’s poorest countries, ridden by stampeding corruption and in the iron fist of the church and Opus Dei, hasn’t been easy. As in any country, politicians left and right need to work carefully around some controversial isssue, so as not upset too many on the opposing side.
Also, the attitude of the population is very different among the well educated people in urban areas and the peasants in Extremadura. As it is in most countries.

I was there about 20 years ago.

That would’ve been '88, right?
You didn’t tell for how long you stayed, but I lived there between '91 and '94, which is close enough in time for me to say that while there are elements of truth in what you say, the way you state it makes it seem a lot more negative than it actually was. Again, if you spent your time in a lot of rural areas or small towns, I don’t doubt you remember it that way. A few years later, though, I found that young well educated 20+ people had a very liberal view about gays, drugs (as you say) and were very much for free abortion. The fertility rate had dropped to rock bottom by then, the women born in the 60’s and early 70’s knew what had happened to mom and didn’t want that kind of life.
In the 14 years since I moved from Spain I’ve returned numerous times and the country is getting progressively more liberal ( in the freedom sense, not left right scale of the U.S.)

Sadly, the thing you’re still quite right about, is the racism towards the Roma and Africans.

A question like “how far ahead of us are they” is probably better suited to IMHO than GQ.

I lived in Spain from 2001 to 2002. One of the more interesting life lessons I learned is that you can’t define a whole society as “liberal” or “conservative.” Spanish culture was very confusing to me because it seemed such a mix of contradictions. Attitudes in some areas were extremely liberal, in other extremely conservative.

Religious attitudes were extremely liberal in that everyone was an atheist. People still attended the church for the old baptism/wedding/funeral trio, but it was all tradition and no belief. When my very Catholic mother visited for Holy Week, she insisted on attending mass on Palm Sunday, Good Friday, and Easter. In the Madrid cathedral, there were about five people besides us attending Palm Sunday mass. Easter in Granada was about the same.

Attitudes towards gays weren’t particularly hostile, more like, “Oh, them? They do their own thing.” Nobody I knew admitted to knowing any gay people. Gays in the media (as in the U.S.) were frequently sources of humor.

Abortion, as far as I know, was illegal when I was living there.

Drug culture was very liberal as far as marijuana goes. All the young people smoked (marijuana and cigarettes) and marijuana was sold openly on the streets. The young people I knew had a disapproving attitude toward hard drugs.

Women do seem to hold many more high political positions in Spain than they do in the U.S. Young women were also more involved in careers that are traditionally male in the U.S. such as engineering, science, and agriculture. Interestingly, Spanish women thought that American women had it much better. There was still a culture of machismo, they said, where men thought they were entitled to cheat on their girlfriends and wanted a girlfriend who would also act as their maid/mother. Also, I noticed, that older women still occupied the traditional homemaker role. At Christmas at a roommate’s house, I noticed that after lunch the young women sat around and talked and drank with the men, while the older women cleaned and served.

Lastly, racism. Southern Spanish, at least, still have that passive racist attitude, probably due to having little exposure to other ethnicities and cultures. They call all Asian people “chinitos” (little Chinese), North Africans are referred to derogatorily as “moros” (Moors), and black people as “negritos” (it’s the diminutive that makes it vaguely insulting). No matter how much I tried to explain, I could never convince anyone that all Asian people are not Chinese. This was during the Japan/Korea World Cup, so you can imagine how frustrating this became. A black American friend of mine got frequent stares and shouts on the street. Racist grafitti against the “moros” was all over town, along with swastikas! :eek: I’m sure it will get better as Spanish people get more exposure to other cultures, but yeah, it’s pretty racist. (Don’t even talk to me about the racist caricatures found on the “Conguitos” (peanut candy) boxes.) 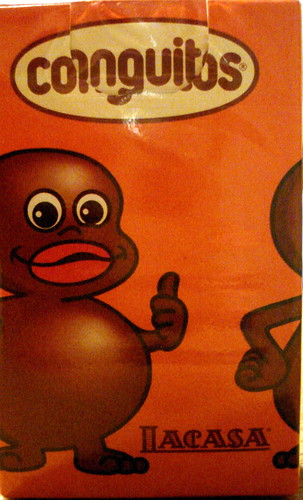 Elites may have been in favor of legal abortion, but abortion is *still *heavily restricted there. (I may have misstated the exceptions. It looks like it is rape, fetal malformation, and health of the mother. And those cases were only allowed in 1985, so it was pretty fresh back then http://www.pregnantpause.org/lex/lexeuro.htm).

I wasn’t trying to be negative, I really enjoyed my time there. My perceptions probably would have been different if I’d been spending most of my time with college graduates. But I am trying to compare “Real Spain” with “Real America,” since I grew up in the Midwest (albeit liberal Minnesota).

That would be “little congos”, I guess. :rolleyes:
Back in the day we called Nestle Toll House pan cookies (yum) “congo squares”. More :rolleyes:

Abortion, as far as I know, was illegal when I was living there.

Strictly speaking no. Abortion on request was, and is, illegal. I can’t remember when they changed the law to include “mother’s mental health” and quick googling didn’t provide an answer, but since it’s now part of the law, abortion on request is a de facto reality, even though it’s not legal.
The Spanish government will propose a law leading to abortion on requst being made legal sometimes during the first half of '09.

Prior to the mental health clause, it was still legal if there was danger to the mother’s or child’s physical health or the pregnancy resulted from rape.

My own experience: I was in Spain two months ago, and it wasn’t unusual to see same-sex couples holding hands or kissing, just like hetero couples in Madrid and Barcelona. I didn’t notice this in the smaller towns.

My own experience: I was in Spain two months ago, and it wasn’t unusual to see same-sex couples holding hands or kissing, just like hetero couples in Madrid and Barcelona. I didn’t notice this in the smaller towns.

But did you see any tacos? I’m really curious about this. Is “taco” a spanish word, or native to Mexico?
And please, no female anatomy jokes from the peanut gallery.

A little searching answered my “taco” query. Of course wiki knows.
m-w says the word itself is Mexican Spanish. That probably means it originated from the people who were there when then Spaniards arrived.