Found this guy in my bedroom tonight (in upper South Carolina). Around 2 1/2 inches wide from toe to toe. I assume some type of wolf spider or huntsman, but I can’t find any photos online to match it. (Nothing with a gray body and a single black stripe running down the center of the cephalothorax.) 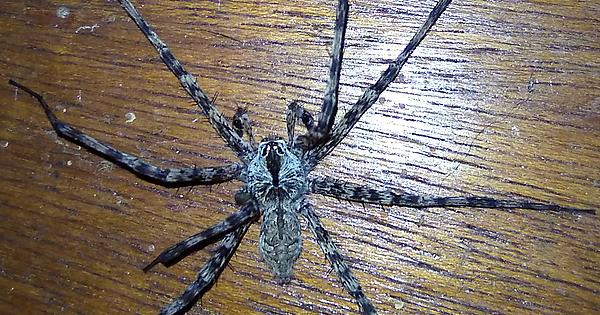 (The two large species of spider I’ve happened to photograph (and identify) in the past both have two black stripes, as do photos I’m finding online.) 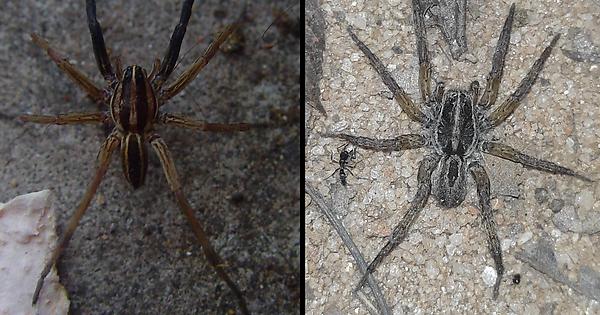 While they are big and scary they are actually good to have around. They kill other bugs you do not want and are mostly harmless to humans (they can bite you which hurts but no venom).

They do not build webs. They chase their prey. Spooky fast.

When I lived in Arizona I would see these. As an arachnophobe I’d kinda lose my shit when seeing one. But again, aside from being scary they are more our friend than not in helping keep other pests at bay.

As I mentioned, that isn’t coming up with something with a gray body and a single black stripe running down the center of the cephalothorax.

From the link I sent you: In case there is some confusion, the bottom two spiders in the separate pane are spiders that I have already probably ID’d and are to provide examples of what I’m not looking for. The top images are of the species I’m looming for (as I mentioned, I’ve been searching wolf spider and huntsman spider–I also searched hobo spider and wandering spider just in case). The trait I am looking for is a single black line down the center of the cephalothorax. (Also the large spines on the legs and palps.)

The two I posted as known quantities are (I think) the Rabid wolf spider Rabidosa rabida on the left and the Carolina wolf spider Hogna carolinensis on the right. Note that despite the general similarity the eyes are significantly different–the Rabid has two pairs of large eyes visible on the top of the head, the Carolina has only one. (The new guy in question I can’t tell–one pair has reflections, but I think there might be two or three more pairs visible on top, too.)

Is the spider you are trying to identify, missing part of a leg?

No, that was just the way it was standing in the first photo. (There are three more photos in the link.)

Google Lens suggests dark fishing spider. It might be some fishing spider, I suppose, though I’m around a thousand feet from the nearest pond. I really wish the eyes were clearer. It kind of looks like three stacked pairs visible (the two pairs that glow plus one non-glowing pair below those) but it also kind of looks like two pairs positioned further outwards in the dark “S and backwards S” above the glowing eyes. 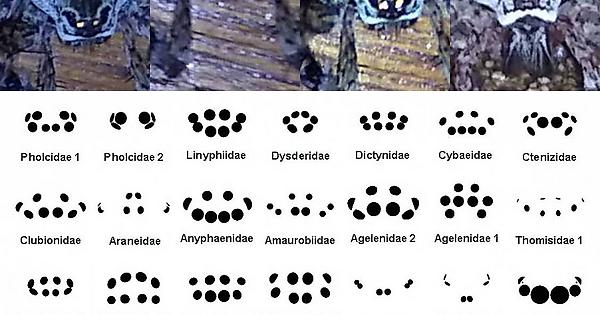