I’m having some really odd behavior on a circuit, and I’m looking for suggestions.

Last summer we had a porch rebuilt (under permit, by licensed contractors including electrician), and they ran a new 20A circuit. The power was turned on last September-ish, and has been functioning fine since. There is an arc-fault breaker on the circuit. My wife has taken over the room as her office, so right now there’s a laptop and monitor, television, and lighting on the circuit, along with a couple of devices that run on transformers (like a Roku). There is an outside GFCI outlet that currently has nothing plugged into it. The television is on most of the day as my wife uses it to play music (some streaming service)

Three days ago the breaker tripped just before bed. Because someone was sleeping in the room with the panel, I reset it in the morning and everything was fine all day.

Two days ago the breaker tripped just before bed. Because someone was sleeping in the room with the panel, I reset it in the morning and everything was fine all day.

Yesterday, ago the breaker tripped just before bed. Because someone was sleeping in the room with the panel, I reset it in the morning and everything was fine all day.

The only thing I can think of is that the TV is malfunctioning in a way that causes it to draw too much current after running all day. It has been exceptionally hot here, and the room is not air conditioned.

I plan to plug the TV into another circuit with an extension cord tonight. But can anyone think on what might be going on?

My second-hand experience with this issue was via a friend. IIRC, his was a surge protector issue, but … here’s a way to troubleshoot the issue: 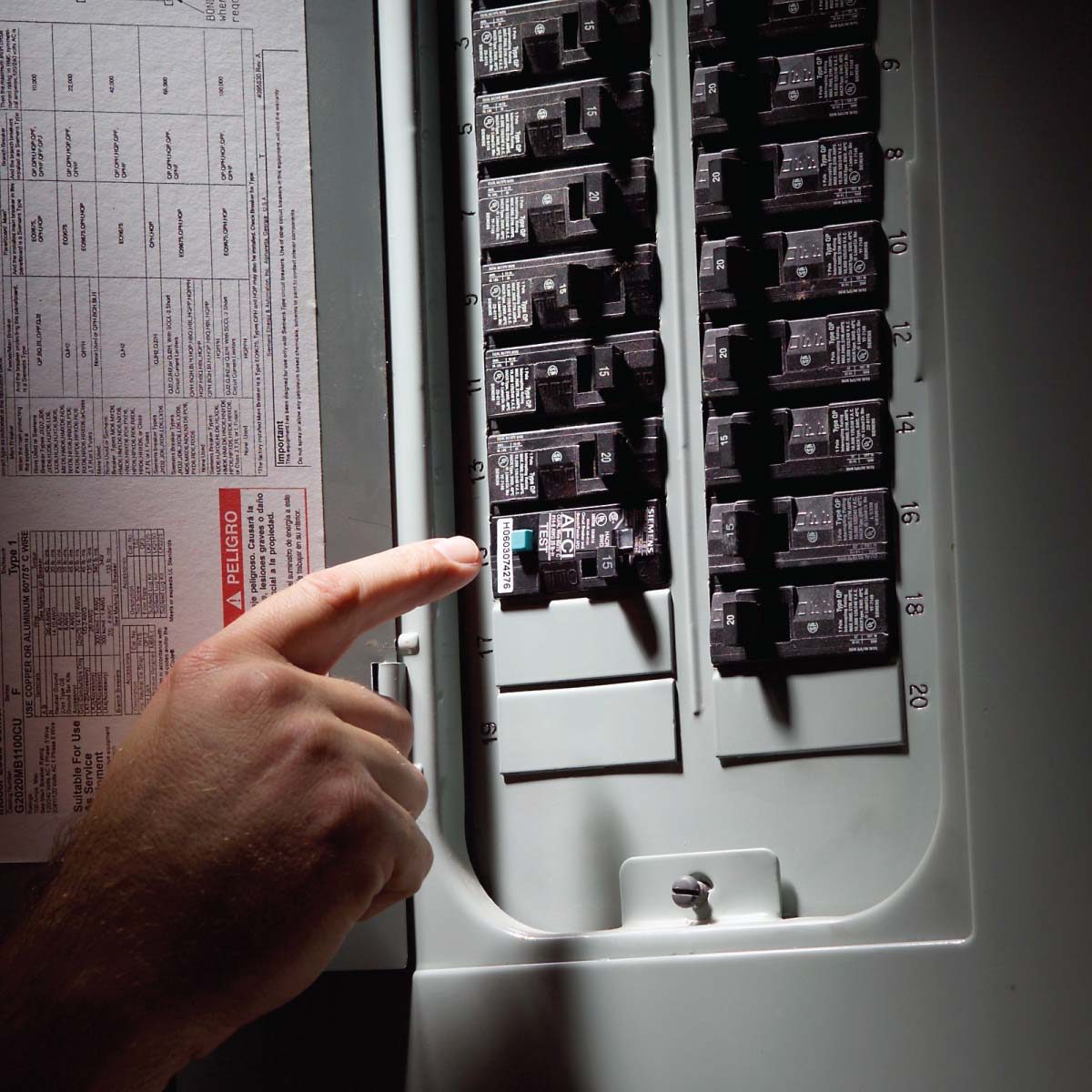 You can find the cause of nuisance tripping of an arc fault circuit interrupter (AFCI) and correct the problem without an electrician.

There is an outside GFCI outlet that currently has nothing plugged into it.

Yes. It’s a 4 season porch and I had them put one on the outside because I didn’t have an outlet in the back yard.

Forgive me, but I can’t help but wonder if a stray dog or cat wanders by at bedtime and pees on it.
Have you had the folks who installed it examine it? 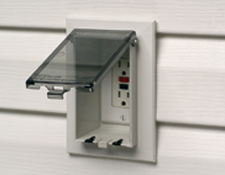 The GFI is in a weatherproof enclosure.

The builder is good. I’m sure he’d send the electrician by, but my concern is that nothing will be obviously wrong (hell, I’ve done my share of wiring and if it were obvious I could probably figure it out) he won’t find anything.

I hadn’t realized that some devices can cause nuisance trips, so I’ll definitely look at that.

I think that with a GFCI, it must be that outlet, or something down line of it. Perhaps a bad connection that shows up under temperature variation? Please keep us posted. I have some of those in the aquarium room, and I think one saved my life when I stepped in a puddle of salt water.

The first thing I would ask is did you change anything at around the time the nuisance tripping started? Did anyone plug any new devices into that circuit? Did you change an LED lightbulb? Did anyone get a new phone or device that came with a new charger?

I read the article upthread, but troubleshooting intermittent problems via the process of elimination can be tricky, and the longer the interval between incidents the trickier it gets. The one suggestion I have, which is very much a long shot, is that it might be caused by a phone or tablet charger under load. I have seen a phone charger under load cause nuisance tripping before ( although it was about 10 years ago). And, if the person using the room is plugging in their device to charge right before bedtime, as many people do - that would explain why it always happens at roughly the same time of day.

Do you have AFCI on the other circuits? An AFCI is a radio reciever/detector, and one of the less likely problems is that the signal is leaking through from another circuit.

I don’t know a lot about electricity, but one thing I did learn (the hard way) is that if a breaker trips enough times, eventually you will not be able to reset it and it will need to be replaced. So hopefully you find the problem soon.

(In our case, it turned out that our garage was on the same circuit as the bathrooms. We discovered that after my wife bought a plug-in hybrid, and the breaker started tripping every time she ran her hair dryer. We had to have an electrician replace the breaker and run a new line to a new outlet in the garage just for plugging in the car.)

It’s a long shot but:
Does it start getting dark just before bed? If so do you have exterior lighting that is photocell controlled that may be tied into that circuit?

there’s a laptop and monitor, television, and lighting on the circuit

What type of lighting? Some AFCIs can have nuisance trips from florescent lights.

Could be a faulty breaker. I’d probably replace it to either confirm or eliminate the cause at the possible source.

Arc fault breakers can be tripped by some pretty weird things. Like you, I had an exterior GFCI outlet tied into a bedroom AFCI protected circuit. My electric lawnmower plugged into that exterior outlet would trip the AFCI when I would start it. I can imagine that something that has a worn relay or electromechanical switch cold have enough internal arcing when the switch/relay opens to cause the AFCI to trip.

I don’t know a lot about electricity, but one thing I did learn (the hard way) is that if a breaker trips enough times, eventually you will not be able to reset it and it will need to be replaced. So hopefully you find the problem soon.

Yeah, the spring gets overused and starts tripping at the slightest provocation. Even the breaker just getting old can do it, but we’re talking decades so that’s not likely the issue here.

I don’t have an answer, only more mystery in my own story. Last August, I moved into a newly renovated apartment so everything was up to “latest” code. Breakers tripped at random. I’d be working, nothing surging and then CLICK.

I had multiple breakers tripping without warning, sometimes across circuits. I’d reset it, and a different breaker would trip. Once, the refrigerator breaker tripped… and there’s nothing else on that circuit. Another time it was the “lighting” circuit, which is the pre-installed overhead lights, all energy-saving fixtures that were installed as part of the renovation, presumably passing inspection.

Some of the circuits were dedicated so no chance of overload.

I did a load analysis and no, I didn’t have any wall outlets overloaded either, or using the wrong kind of device. Space heaters were the only potential culprit and I had the specs for them, and none of them were in use during any of these trips anyhow.

The electricians acted like I was crazy till I showed them a detailed journal with dates, times, what tripped, what tripped next, etc. Plus a circuit diagram that I had made myself, showing what was ACTUALLY connected to what.

Then I asked for an exorcist. I mean… their work was perfect so it must be a poltergeist, right?

What seemed to be going on was that:

Those same contractors came back multiple times and would find maybe one arc fault but then they’d do things like leave my wall plates dangling for a week. The crew were junior and didn’t know how to test for ground faults OR arc faults, or even do rudimentary problem-solving. I had to do all their thinking for them.

Turned out that several circuits that had been wired to each other by accident. That took like 5 visits and a different electrician to figure out.

Finally I convinced building management to hire a different electrician who found most of the remaining issues. I threatened to hire my own and deduct it off my rent. Other tenants had complained as well, since it’s a brand new renovation and half of them couldn’t even use their lights.

The second electrician had a brain and didn’t try to gaslight me. There were multiple issues. One had been caused by a piece of conduit which apparently had loose screws and nails inside of it. They just ran new conduit, visible conduit, so as not to have to open the drywall.

Sloppy contractors, and poor coordination among trades. Maybe the drywall got slapped on before the electricians were completed.

I don’t know if this will help your problem. I’m curious about why yours is tripping at the same time every night.

Just an update. Last night got away from me, so I did no experiments. Nothing tripped. So far today, no issues. But again, part of the interesting thing is that the timing, three nights in a row, was between 9:30 and 10:00pm.

It’s our preferred TV spot, so I will let you all know what (if anything) happens.

Here’s the problem with arc fault circuit interrupters (AFCIs). One of two things often happens when an AFCI trips all the time:

After a while, the homeowner and/or electrician concludes these are nuisance trips. Replacing the AFCI does not fix the problem. AFCI is removed and replaced with a standard circuit breaker. Problem solved.

After a while, the homeowner and/or electrician concludes these are nuisance trips. Replacing the AFCI does not fix the problem. AFCI is removed and replaced with a standard circuit breaker. Problem solved… for a while. Best case: the arcing leads to an over-current situation and the circuit breaker trips, and then (hopefully) the problem will be easier to find. Worse case: arcing causes a fire.

So that’s the problem with AFCIs… when they trip, you often can’t find the problem. And eventually you’ll get frustrated and replace it with a regular circuit breaker. This might work (example 1 above) or might be a bad thing to do (worse case in example 2 above).

I really have no good advice other than to try and identify the load that the AFCI thinks is arcing. Of course, it could be somewhere in the wiring. Or it could just be a poorly-designed AFCI. I dunno…

About ten years ago I installed several AFCI breakers. One worked just fine with no problems but the other tripped sporadically with nothing plugged in the circuit. I eventually did a Google search on that brand model and found that there was a recall for them. Swapped out the breaker and had no problems since. (It was Square-D if that matters.) You might see if there are others with the same issue.