As part of my effort to become bilingual I’m putting a bunch of Spanish music on my mp3 player. I’m trying immerse my self in Spanish and learn it on a gut level working on learning Spanish phonetics then going to read any Spanish reading material I can get a hold of. It might take a bit of dictionary work at first but I’ll build a vocabularly and expan on it. I figure this combined with listening and watching any Spanish media I can get a hold of is the best way to do it.

Fast paced and medium paced music preferred but slow paced can be good too.

I have some Shakira already. Even if I can’t understand most of it yet it’s good music. The La Tortura video is hot.

Try to find some stuff by Astrid Hadad. She’s kind of a cross between k.d. lang and Frida Kahlo. With a little Diamanda Galas and Lene Lovich.

Also, El Control Machete does some pretty awesome Mexican hip hop. Kinky does some great electro pop. Manu Chao does a very smooth, melodic world-pop that’s hard to describe but goes down easily. Not challenging, but still original and interesting. More Euro than Spanish; includes lyrics in French and Portuguese as well. Cafe Tacuba is pretty straightforward pop, from Mexico, with a little “alt” tinge to it.

“Fast and medium paced” encompasses a whole lot of genres. Any specifics on the kind of music you listen to in English (rap, pop, heavy rock, specific artists, etc), so we can think up some similar Spanish-language artists?

How about some Nena Daconte?

I can’t say that Los Lobos’ folklorico albums are really my favorites, as I prefer their straight up rock and roll. However, they’ve got several well received Spanish language albums such as Acoustic En Vivo (I saw this tour) and Del Este de Los Angeles which is a 1978 live acoustic recording of their Mexican wedding band repertoire.

If you like some good Tex-Mex, try Tish Hinojosa. For Cuban, Gloria Estefan’s mi tierra is a good bet.

Find the liner notes for anything you want to listen to. The vocabulary begins to make more sense when you know how to spell it and look it up in your Spanish/English dictionary.

I have some Shakira already. Even if I can’t understand most of it yet it’s good music. The La Tortura video is hot.

Shakira’s first two CDs (as an adult) are her best. Since then, she hasn’t been the same.

But really, don’t you see how pointless your request is? You need to identify a genre of music that you like. If you like Shakira, then it’s a certain type of pop music you should look for. You’re not going to learn much Spanish by listening to music that you don’t like.

I am a Cafe Tacuba and Mana fan myself. Rock N’ Roll en espanol.

lissener thanks for the suggestions! I’ll give them a go. The styles sound promising!

Sr Siete my connection is really slow but I’ll queue up some of those vids tonight and watch them in the morning.

Darryl Lict not into folk music too much but I’ll check em out. You never know till you try something.

missred thanks for the tip! I’m trying to be careful to learn the pheonitics and spelling right from the start. Save alot of trouble later on. The way I figure it. It’s phonetics, and pronunciation (basically I need to relearn the alphabet for Spanish.) Then basic vocabulary. leading to Basic Grammar. Then Advanced vocabulary and grammar. Basically I’m trying mirror how I learned English from un ninito a un adulto and build it up in my head like I learned my first language.

I practice rephrasing my thoughts into Spanish when it’s something I have the vocabulary for. The hope is if I can think in Spanish I’ll be fluent in it.

“Fast and medium paced” encompasses a whole lot of genres. Any specifics on the kind of music you listen to in English (rap, pop, heavy rock, specific artists, etc), so we can think up some similar Spanish-language artists?

I’m kind of an oddball about the only kind of music generes I don’t like are gangsta rap, country music (with exceptions), and death metal (maybe with exceptions to that too just haven’t came across anything I like). I love techno, progressive, and alternative rock. Basically anything high energy, has lyrics that make you think, or is novel (like Shaniqua don’t live here no more, a bunch of Weird Al’s stuff). Leaning toward high energy though. It helps me move quick at work.

Some favorite bands that come to mind is Arcade Fire, Muse, Tool, the Chromatics, and Yoshida Brothers.

How about Spanish rock, pop, or techno?
on preview:

guizot Never been very good at sticking to a genera but the above might help.

Ataraxy cool I’ll give them a listen!

Thanks for the tips everyone.

Also “Bacilos”, they are a Clombian:

Although these groups are all from different countries, they sing Spanish with little to no accent.

Listening to music was a huge help to me in learning Spanish! Go for it!

My main recommendation is anything by Mecano or Ana Torroja, their lead singer. It’s pop with some fast, upbeat stuff and some very moving ballads. Her voice is incredible, which makes it ideal for learning as you listen.

How timely! I heard this on NPR today. It is about Mexican singer Ximena Sarinana. She has a new album of jazz-inspired spanish songs, one of which was nominated for a Mexican Grammy.

And while I don’t speak spanish and only understood a handful of the words, they seemed to be clearly enunciated, which would aid learning, and beautifully sung, a definite aid to listening.

I adore this album: The Roots of Chicha: Psychedelic Cumbias from Peru. I first heard of it on NPR.

I also like Ricardo Lemvo & Makina Loca. May I recommend Mambo Yo Yo?

My colleague favors Cafe Tacuba, but I am not familiar with their oeuvre.

I will secretly admit that any catchy Ricky Martin album in Spanish might do.

Try to find some stuff by Astrid Hadad. She’s kind of a cross between k.d. lang and Frida Kahlo. With a little Diamanda Galas and Lene Lovich.

Also, El Control Machete does some pretty awesome Mexican hip hop. Kinky does some great electro pop. Manu Chao does a very smooth, melodic world-pop that’s hard to describe but goes down easily. Not challenging, but still original and interesting. More Euro than Spanish; includes lyrics in French and Portuguese as well. Cafe Tacuba is pretty straightforward pop, from Mexico, with a little “alt” tinge to it.

Dang, broken links. But there are too many great pictures of Astrid to choose from: 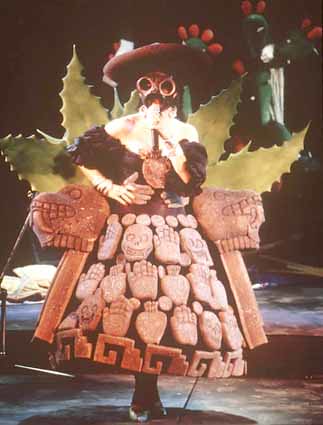 I’m a surf music freak and I’m rather fond of both Los Straitjackets and Lost Acapulco, although to be fair most surf music is instrumental so…

Control Machete is awesome–fastest hiphop lyrics I’ve ever heard, guys could give an auctioneer fits. If you can figure out what the hell they’re saying I think it’s equivalent to a diploma or something.

I think you should be able to find most of these on Youtube:

“Y Que” by Babasonicos. The video has nothing to do with the song. You’d never know that it’s about a guy running into an old friend, and liking the guy’s girlfriend.

“Llueve Sobre La Ciudad” by Los Bunkers. Stupid video, good song. It should be about a half-crazed guy walking in the rain, but it’s not.

“Despertar” by Borya. I can’t actually figure out what most of the lyrics mean. He’s in despair and can’t apologize or get an apology.

“Basura Pop” by Disidente. Perhaps tongue in cheek, but it’s making fun of pop songs that claim to be something else. Lyrically, reminds me some of sellout by Reel Big Fish, but played straight.

I recommend Julieta Venegas, Heroes del Silencio and Jaguares. Also Hombres G, 'cause their songs are somewhat unusual and funny, such as “Visite Nuestro Bar” and “Marta Tiene un Marcapasos.” I also second the recommendation for Mecano.

This link points you to some legal downloads of groups that are having some airplay in Mexico City’s quasi-indi radio station “Reactor”. Which, funnily enough, is owned by the federal government.

I don’t even speak Spanish (beyond what I can decipher from my French), but Silvio Rodriguez (a Cuban singer-songwriter) is one of my favorite artists, period. Something about his music just speaks to me, even with very limited comprehension, and his lyrics are praised as extremely beautiful and poetic by South American friends who know about him. A few even list him as their favorite musician.

Ojala is one of his most beloved songs (note that I couldn’t find any version that didn’t have the crowd singing along as well, but it should give you an idea). The album version is just lovely.

“El Ultimo de la Fila” is a now defunct Spanish band with great rock/pop songs of all speeds. They have a definite Spanish flavor to them with great acoustic guitars.

They both have fantastic lyrics, very poetic and full of images, so you will be listening common words used in unexpected ways, a great thing for someone trying to learn a language.