Suppose the best player in college football were from a military academy (and had to do 4 years of service.) How high would he be drafted?

Roger Staubach, one of the NFL greats, was drafted low because he was an Annapolis cadet and had to serve in Vietnam for years after he graduated.

Suppose you had a Patrick Mahomes-like player who were at West Point, USAFA or Annapolis - someone who might go as high as No. 1 overall in the draft, if it weren’t for him being unavailable to play for at least 4 years - how high would an NFL team still draft him?

I’d say it would depend on a number of factors. What position he plays, how pressing of a need the top-drafting team has at that position, and frankly, whether or not the country is at war.

Napoleon McCallum, who was a two-time All-American running back at the Naval Academy in the 1980s, was drafted in the fourth round by the Los Angeles Raiders; it’s likely that he would have been drafted much higher if not for having to serve in the Navy for four years.

Napoleon Ardel McCallum (born October 6, 1963) is a former American college and professional football player who was a running back in the National Football League (NFL) for six seasons during the 1980s and 1990s. McCallum played college football for the U.S. Naval Academy, and then played professionally for the Los Angeles Raiders of the NFL. He is a member of the College Football Hall of Fame. McCallum was born in Jefferson City, Missouri. The son of two teachers, he grew up in the Lincoln...

Also, just to clarify on this:

Roger Staubach, one of the NFL greats, was drafted low because he was an Annapolis cadet and had to serve in Vietnam for years after he graduated.

Staubach did serve in Vietnam for between one and two years; he spent the rest of his tour of duty with the Navy stateside, and played football with service teams during that time.

Anyway, here’s my educated guess: round 3 to 4.

However, it’s made more complicated now, compared to Staubach’s time or McCallum’s time, because the NFL has standardized its rookie contracts in recent years, and all rookies now sign four-year contracts. This means that, a team that drafts that service-academy star will lose contractual control of him just as his mandatory four-year tour of duty ends.

The player, if drafted and signed, would likely wind up on some non-injury reserve list while he’s on active duty, but I suspect that that time would still count against his rookie contract.

Suppose you had a Patrick Mahomes-like player who were at West Point, USAFA or Annapolis - someone who might go as high as No. 1 overall in the draft

In terms of your question I think you’re asking about quarterbacks that are expected to be taken first overall because they are such good prospects, not just the best in that particular class.

Googling quarterbacks taken first overall over the past 25 years:

That’s 18 guys, but I only count seven or eight who were legitimate first overall pick prospects. If a prospect of the caliber of Andrew Luck or Joe Burrow or any Manning (Arch!) had a military commitment, their draft situation would be markedly different than a Tim Couch, Jared Goff or Jamarcus Russell who only went first because teams were desperate for a quarterback.

In terms of your question I think you’re asking about quarterbacks that are expected to be taken first overall because they are such good prospects, not just the best in that particular class.

Agreed – I think the hypothetical here is that you have a player who is a legit #1 overall pick (probably a QB, but I could picture a great offensive tackle or edge rusher fitting that, too*), but who very likely wouldn’t be available to play in the NFL for four years, due to his military service obligation.

*-in fact, the #1 overall NFL pick has been a QB, an OT, or a DE for the past 26 years; the last player at another position to be drafted in the top spot was WR Keyshawn Johnson.

In recent years, they’ve actually loosened things up a bit and a few guys have been allowed to defer service and/or have some sort of alternative to fulfill the duty requirements. However, all of these players have been marginal prospects who were late round or UDFA graded players competing for the bottom of roster or practice squad.

My opinion is that any legit top NFL prospect (which to be clear is much different than best college player, see all the college QBs who can’t stand in the pocket or evade the pass rush and complete a pass against NFL coverage) would probably get some sort of pre-draft assurance or clarification and likely the “4 years” thing would not exist. So, it depends on the team needs and many factors. Also complicating things - it would be highly unlikely for a top player at one of the top drafted positions to develop at one of the service academies. RBs are out of favor in the draft and in compensation/careers. DBs aren’t drafted highly unless they are like the absolute best. A top QB won’t be at Army/Navy in modern times. Maybe a crazy good LT or edge rusher will come through.

I would have thought that a college player would enter the draft the year they become eligible to play in the pros, not the year they graduate from college (granting that for most players, those are the same year). Why wouldn’t a player who’s off to the military enter the draft when they’re done with their service?

I would have thought that a college player would enter the draft the year they become eligible to play in the pros, not the year they graduate from college (granting that for most players, those are the same year).

Here are the rules for eligibility for the NFL Draft: it’s tied entirely to how many years they are removed from high school (3+ years), and whether they have used up their college football eligibility (four years, I believe).

That’s when they “enter the pros,” and having to serve in the military post-college (or otherwise deciding to not be in the draft when one becomes eligible) doesn’t enter into it. Once your college eligibility is done, you’re draft-eligible, and it also looks like you are only eligible for a single draft year.

Players are draft-eligible only in the year after the end of their college eligibility. 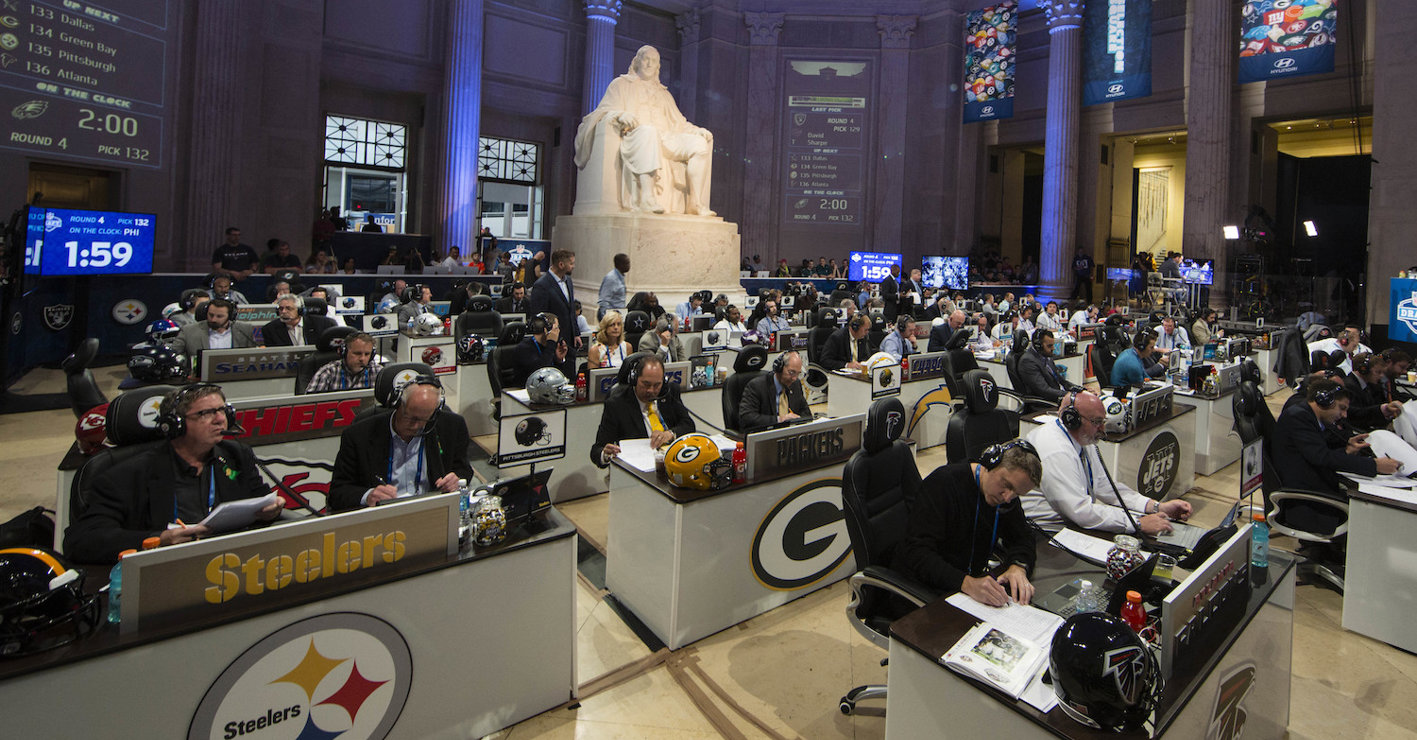 The rules of the NFL Draft | NFL Football Operations

Which team will go first? How long does each team have to make its pick? Who is eligible to be drafted? The NFL has specific rules for each part of the draft process.

Basketball is quite different from football, but David Robinson was the #1 overall pick in the draft by the Spurs in 1987 but had to serve for 2 years (not the usual 4 for a variety of reasons) before playing in the NBA. Robinson is widely considered to be the best basketball player in Naval Academy history. He chose the jersey number 50 after his idol Ralph Sampson. He began college with no expectations of playing in the NBA, but in Robinson's final two years he was a consensus All-American and won college basketball's two most prestigious player awards, the Naismith and Wooden Awards, as a Naval Academy first classman (senior). In 1986, Robinson led Navy, a number seven seed, within a game of the Final F Robins...

Why wouldn’t a player who’s off to the military enter the draft when they’re done with their service?

Because the service academies regularly allow their NFL-bound graduates to defer their service so that they can play without a huge delay in their development.

So an academy grad who went on to have a 10-year pro career would end up being a 31-year old Ensign/2nd Lt. when he finally saw active duty?

A couple of examples that I can think of off the top of my head (other than Robinson mentioned above) is Rueben Villanueva and Kevin Greene.

Villanueva graduated from West Point in 2010 but went undrafted. He did get a tryout with the Bengals and later with the Bears but wasn’t signed by either team. He spent the next four years in the Army as a Ranger, then tried out for the Eagles and was then signed by the Steelers.

Greene did not go to a service academy but was commissioned through ROTC at Auburn. Per Wikipedia, he completed his Armor Officer Basic Course during the offseason. I haven’t found anything else about his service other than what’s on that page but I do remember that he remained in the National Guard during his time in the NFL and his unit accommodated his NFL schedule. I also recall that he had long hair while in the NFL, which I always found odd.

So an academy grad who went on to have a 10-year pro career would end up being a 31-year old Ensign/2nd Lt. when he finally saw active duty?

Not that it’s been tested like that, but I would not be surprised that, even if the military was willing to allow a star player to delay his active-duty commitment due to a promising NFL career, that they wouldn’t allow such a lengthy delay.

As “ekedophin” said, there are a number of variables that come into play, so there is no definitive answer. I’m thinking, however, that a GOOD team might actually draft him with future needs in mind, as opposed to a bad team with a pressing and immediate need for a good QB. Since good teams have low draft picks, I’m thinking a 3rd or 4th round pick. This is just a guess, mind you.