Synthesizing methamphetamine in a soda bottle?

I have seen this claim pop up in the media, that there is a “new” method of synthesizing methamphetamine that requires only a soda bottle and the reagents, you don’t even need to extract the pseudoephedrine from pills just throw them in shake with reagents and consume!

I have basic chemistry knowledge and know the basic outline for how to synthesize methamphetamine, I can’t understand how it could be possible in a single container since acid/base extractions are involved. Even if it was somehow possible how on earth could you safely consume something with the reagents still present without extraction?

Yet people will swear it works man! :dubious:

I’m thinking this is some kind of media myth, OR law enforcement disinfo used as probable cause for a search(who doesn’t have a soda bottle in their car?!?).

No news article ever goes into the facts, even when readers express extreme skepticism in the comments.

I have seen this claim pop up in the media, that there is a “new” method of synthesizing methamphetamine that requires only a soda bottle and the reagents, you don’t even need to extract the pseudoephedrine from pills just throw them in shake with reagents and consume!

Maybe they are getting the wires crossed with Desomorphine (Krokodile).
http://en.wikipedia.org/wiki/Desomorphine

it sounds like that could be synthesized as you describe, from codeine pills and yes it’s highly toxic from leftover reagents but the type of people that use it don’t seem to care.

I don’t wanna give any directions, but an episode of A&E’s *Intervention * definitely showed some addicts doing this. Lithium-Ion cellphone batteries were also used in the bottles, for their chemical Lithium, not for any electrical use…

In this book, the writer talks about it being a common occurrence in the small town Midwest. People riding bicycles while shaking 2 liter soda bottles full of chemicals.
http://www.methlandbook.com/reactions/methland-the-story-behind-the-book-oelwein-daily-register/

While Reding would argue about the meaning of the book, it would be hard for him to argue that it does not have some negative connotations in it, as well as the sensational, from Oelwein once being ran by the Mafia to kids riding up and down the street mixing up meth in liter pop bottles on the backs of their bikes. And those are just a couple of the mild things that Reding brings up.

http://www.lineofduty.com/the-blotter/107918-mo-cops-shake-n-bake-method-burning-thru-meth-land
Hype? No first hand knowledge on my part. But the chemistry is simple enough to where you ought to be able to do it in a pop bottle, especially if you don’t care about quality, impurities, or overall safety. Pseudephedrine is very close to meth aleady, so the steps to get there aren’t that complicated.

Maybe they are getting the wires crossed with Desomorphine (Krokodile).
http://en.wikipedia.org/wiki/Desomorphine

it sounds like that could be synthesized as you describe, from codeine pills and yes it’s highly toxic from leftover reagents but the type of people that use it don’t seem to care.

Krokodil is a whole nother thing. As far as I know, hasn’t made it to the States yet. Using the stuff is a whole level of degradation beyond using meth. (That shouldn’t even be possible, but it is. Krokodil is the worst of the worst.) 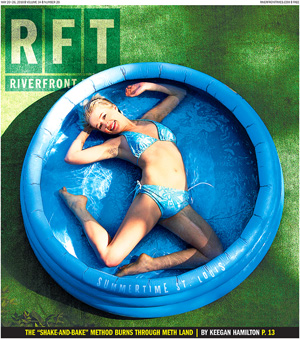 Methology 101: Old-school meth labs give way to "shake and bake"

That methamphetamine remains so prevalent in Missouri and other states is due in part to the sheer ingenuity and persistence of meth cooks, despite government...

[moderator note]
A few people reported this thread, but I’m not going to close it. Just so everyone’s aware, discussing whether this is possible is just fine. Providing instructions on how to do it would NOT be fine.
[/moderator note]

Just in case anyone hasn’t seen the exact phrasing of the rules:

FAQ - Rules for Posting at the Straight Dope Message Boards

You are allowed discussion on almost any topic, but…Note that the Registration Agreement prohibits:

any material that you know or should know is … violative of U.S. law. You agree not to post material that in our opinion fosters or promotes activity that is illegal in the U.S.

Sex: The medical approach is OK, the Penthouse approach is not. If you’re not sure, err on the side of caution and/or contact a staff member before you post.

Copyright violations: Are NOT OK, under any circumstances. For copyright rules, see Post #3 in this thread… and see the Registration Agreement for “illegal acts.” We consider that discussions of P2P and file-sharing are pretty much discussions of how to evade copyright laws. The excuse “I just want to download public domain movies and Linux distributions” is lame. Very.

Many of the services that used to operate illegally/without paying royalties are now in compliance and so discussion of these services would be allowed, they’re legitimate. But we do not want to see recommendations of companies and programs still remaining that operate in violation of copyright law.

Calls to Action: Threads calling for folks to take actions (political, charitable, personal, etc) are prohibited unless there is prior approval from a moderator or administrator. Do not instigate members to take action for or against any issue or entity. Do not post phone numbers, email addresses or any other personally identifiable information of any entity in this regard. Exceptions for valid and noble causes may be made with the advance permission of a moderator or administrator.