What do you think about synthwave music? For the unfamiliar, synthwave is basically music inspired by the 1980s culture with a heavy emphasis on synthetic and electronic sounds. Sources of inspiration include 80s-era film soundtracks and video games. Also most of the album art involves cars or a cityscape.

Personally I like songs such as “Hold Her” by Sebastian Gampl (my favorite synthwave artist). It’s an instrumental but romantic song, something I think Stevie Wonder could sing along to.

There’s also stuff like “The Deepest Blue” by Kristine, which sounds a bit like a raspy Amy Grant singing a variation of Don Henley’s “The Boys of Summer”.

But most of the genre is pure synthesizers and drums, a la Robert Parker’s “Fortress” or Mitch Murder’s “Breaking Waves”.

I discovered the genre during the first season of Stranger Things when the corresponding soundtrack was released. Kind of went down the rabbit hole a bit for a while but I have mostly moved on now. I have a few well curated playlists that I subscribe to that still hit the spot on occasion. The only two stand out artists I‘ve Ed for beyond the compiled playlists are Com Truise (fun to say as well) and S U R V I V E (he guys behind the Stranger Things soundtrack.

I will say that I’m hearing lots of those sounds pop up in the weekly new music playlist that Apple sends me. The new Bat For Lashes album is a particularly strong example.

Look up Fartbarf for some great synth tunes.

Live at the Necropolis: Lords of Synth

Look up Fartbarf for some great synth tunes.

I have to admit that I’m really hesitant to search ‘Fartbarf’ on Google.

Live at the Necropolis: Lords of Synth

I have to admit that I’m really hesitant to search ‘Fartbarf’ on Google.

I really can’t blame you.

Here’s a youtube link to one of their albums. You won’t even have to see any of their creepy masks… 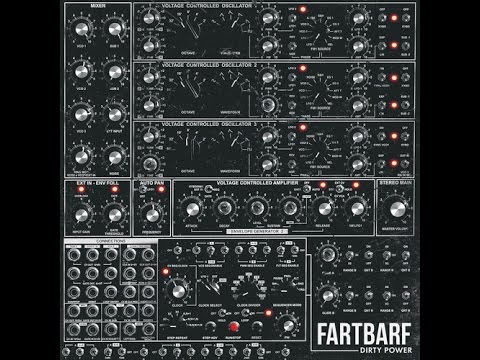 I prefer “dark” synthwave and (probably because I encountered them first) consider Carpenter Brut to be the quintessential example.

Speaking of Stranger Things soundtrack, the Turbo Kid soundtrack is great too.

When first heard the Stranger Things soundtrack I was immediately reminded of “Tangerine Dream”, which is no bad thing. My early years were steeped in electronic music and new wave so if a new generation are taking that aesthetic and doing something with it then so much the better.

Most of it I don’t like, because it sounds exactly like the *worst *sort of 80s synth-pop. The stuff I actively loathed at the time. Don’t get me wrong, I adore 80s synth-pop, but Depeche Mode or Talk Talk or Gary Numan or even the New Romantic stuff, not shitty B-movie soundtracks, which is what the synthwave artists seem to be nostalgic for.

And don’t get me started on the Hitler stuff…

The post-Drive novelty wore off quick, it bores me. I’m sort of in agreement with MrDibble.

But I’m a retired synth addict, so a part of my brain is always analyzing the sound design of any electronic music I hear. I would turn that off, if I could.