Taking Bets: Who is the 'insider' who wrote the NYT Opinion Piece?

Naw, I think it’s the Conway’s. They’re the new Matalin/Carville, going to sell their life’s story for a book deal, a movie production deal, etc. KAC’s job is to verbally blow Trump whenever she can, but she has no* decision-making authority… but now she’s being floated as Mulvaney’s possible replacement. Think she and George want her in the middle of the shit show, where legally contentious issues have to be dealt with every day? Naw, this book announcement… coming so swiftly on the rumors… is step 3 on their Grand Plan and puts a timeline on her exit.

Or not! It’s fun to speculate though!

*that anyone has been able to ascertain (a caveat)

Maybe if he wrote an earlier book. Who exactly are the people running statistical analysis on books to determine anonymous authors anyway?

I was thinking the same thing. Wasn’t that how the author of “Primary Colors” was identified? But if this person doesn’t have much publicly available work to compare to, it may be tough to get a match.

The “Kellyanne Conway secretly has a heart of gold” theory takes a slight hit when she calls a reporter just to harangue her for reporting something true. Just reading the transcript I could almost smell the Stoli fumes. Yikes.

Bump.
As I recall, the anonymous author said he or she would identify themselves before the election. 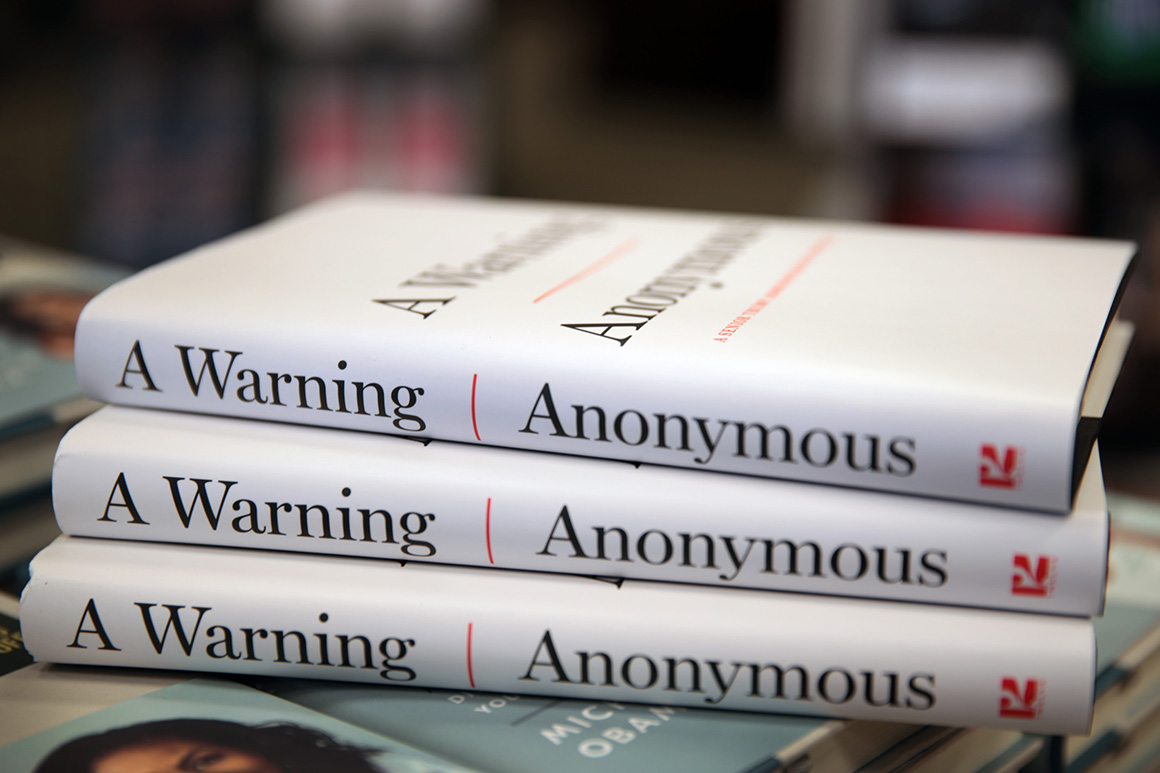 ‘Anonymous’ vows to unveil identity as 2020 heats up

“Trump will hear from me, in my own name,” said the mysterious author of the famous op-ed and new book in a Reddit AMA.


Did I miss something in a recent news cycle or did it not happen yet? Or will it never happen?

Even if this individual did identify themselves at this point I’m not sure what it would accomplish.

Did I miss something in a recent news cycle or did it not happen yet? Or will it never happen?

Nothing (much) has happened. The author released a new preface to “A Warning” in August of this year and said they’d reveal themselves in “due course”. Trump said in February that he knew who it was, but hasn’t revealed it yet. Either it would be too embarrassing to admit, or more likely, he was BS-ing.

‘Anonymous’ urges a vote for Biden

The unknown administration official who wrote a book trashing Trump says a second term will mean "a nation undone" in a new book preface.

My guess is Col Vindman who is retired from the Army now so he can reveal his name. It was basically a forced retirement.

I don’t think Vindman is right. Vindman seems to be a “by-the-book” military person, who serves the office faithfully. The stories Anonymous tells (eg swiping a document off the President’s desk so he can’t sign it) is essentially a political operative, bending the rules as needed. Just strikes me to be a different mindset.

From November of last year, this guy thinks the author was former Pentagon aide Guy Snodgrass based on his background and comparisons to a book he wrote. Some of it fits very well, other parts not so well. 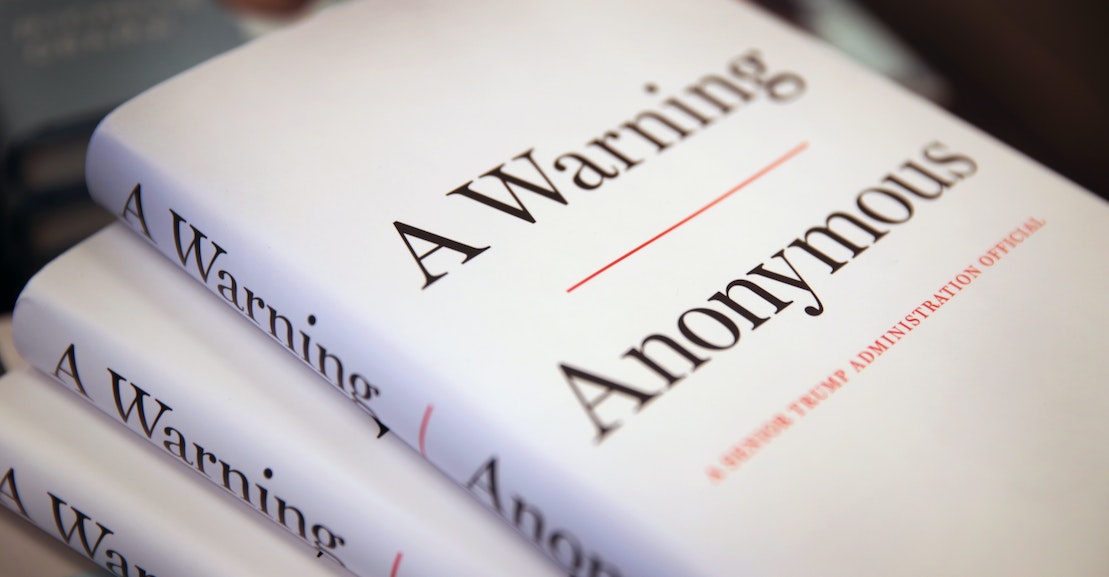 Could This Be the Guy Who Wrote Anonymous's "Warning"?

The op-ed and book from a mysterious Trump administration official bear a striking resemblance to a former Pentagon aide's memoir.

George Conway tweets that Anonymous may be speaking out soon:

Anonymous Will be Speaking Soon

Now here's an interesting tweet from George Conway:"I had an amazing conversation this morning with ... Anonymous. Anonymous is a true patriot. We'll all be hearing a lot more from this person very, very soon."

Anyone have him in the pool?

Well shit, I wish I would have connected the dots. I’ve liked seeing this dude making guest appearances on the primetime (and lunchtime?) CNN shows these last few months. It’s been interesting getting his perspective from his time on the inside.

WASHINGTON (AP) — A former Trump administration official who penned a scathing anti-Trump op-ed and book under the pen name “Anonymous” made his identify public Wednesday. Miles Taylor, a...

The NY Times said “anonymous” was a "“senior administration official”. Taylor wasn’t even a senior level official at DHS.

Good thing he helped keep Trump’s worst instincts in check. Not that he was really in any position to do so, of course. But any remotely decent human being would have gone begging on the streets before making a living that way.

Fuck him. With very large and very rusty farm implements.

The “Kellyanne Conway secretly has a heart of gold” theory takes a slight hit when she calls a reporter just to harangue her for reporting something true. Just reading the transcript I could almost smell the Stoli fumes. Yikes.

This is why we all here need you here. Where you at?

No joke. He was a Deputy Chief of Staff to the Secretary of Homeland Security at the time. While not a “making copies and coffee” position, I’d be surprised if he’d come within twenty feet of the President at the time and I’m sure he had exactly zero influence over administration policy or strategy.

That’s not what this article says:

But as DHS chief of staff, Taylor was in many White House meetings with the president on his border policy and other major homeland security issues. During Taylor’s time as chief of staff, Trump threatened to shut down the southern border, and his administration developed the policy to force asylum seekers to wait across the U.S.-Mexico border.

(CBC, but article is from the AP)

Former U.S. Homeland Security chief of staff outs himself as 'Anonymous' who...

Miles Taylor, a former Department of Homeland Security chief of staff, has announced that he is "Anonymous," the senior White House administration official who penned a critical op-ed piece about Donald Trump.

The wikipedia article on him says he was Chief of Staff, not a deputy Chief of Staff. That makes him pretty senior, I would think - he would have regular contact with the Secretary of Homeland Security.