Taming an insect as a pet

Which insect makes a good pet in that it can be handled, recognises you as the master and has some level of interaction beyond just feeding times.

And does not kill you.

Not an insect exactly, but my son has a pet snail. Easy to handle, and you can pretend it recognizes you. It’s also a surprisingly tranquil creature to watch go about its business.

If you must have an exoskeleton, hermit crabs are popular pets, and tarantulas are an option, a scary looking option, but they won’t kill you.

You’re asking an awful lot of an insect.

Hissing cockroaches are said to be entertaining, but don’t generally appreciate belly rubs.

I don’t know that insects, and reptiles for that matter, have the capacity to be tamed and recognize you as it’s master. They can be kept as pets for sure, but they are not capable of being cuddly and interactive the way birds and mammals can be. I don’t think you can train your pet mantis to play fetch, or give you a high-five, for example. I am sure someone here with a background in biology will be along shortly to explain.

Other than dogs, I’m not sure any animal recognizes a human as the master. Some mammals are smart enough to learn that if they act in a certain way, they get rewarded, but that’s about it. Insects have far less learning ability than mammals.

But there are insects that aren’t dangerous and big enough to be handled. Japanese rhinoceros beetles are popular in Japan. They only live a couple of months as adults though.

Get an ant farm. They are very interesting to watch. Not gonna ever do your bidding, though. My middle daughter used to keep lady bugs as pets. She had a lot of fun doing it. She claimed they knew her and knew their names. She was about 8yo at the time. Belief is easy at that age.

Isopods of the family Armadillidiidae (pill bugs, roly polies, woodlice) are cool to watch. I introduced a few to our tortoises’ environment and they’ve reproduced and done well. They eat Kjell’s leftover bits of food and other organic debris. They’ve “learned” to become more active when humidity rises, which coincides with his feeding time.

Taming might take some time, so pick an insect with a long lifespan - these have 15-30 year lifespans. A friend just lost one that was hatched in the '90s.

Which insect makes a good pet in that it can be handled, recognises you as the master and has some level of interaction beyond just feeding times.

I saw on another site yesterday someone had posted a picture of their “pet walking stick [insect]”. When I just googled “stick bug pet” I got a TON of hits. Apparently stick insects of many types are popular “pet” insects.

Other than dogs, I’m not sure any animal recognizes a human as the master.

It’s possible that you’re taking “master” too literally. Certainly there are other animals besides dogs that are capable of forming special bonds with specific people, thinking of them as “my human” rather than just “a human.” But I have my doubts whether even this applies to any insects.

I doubt that any insects can recognize specific individuals, let alone bond with them. While some insects have limited learning capabilities, most behavior is at the level of instinctual responses. Insects could become “tame” in the sense of habituated to being picked up/handled, but that’s about it. They are not going to “interact” with you beyond recognizing you as part of their environment.

Since this has become largely recommendations on the kind of pet insect to get, let’s move this to IMHO.

I don’t think any invertebrate is going to ‘recognise you as master’. I’m not even sure what that’d entail.

It’s impossible to know for certain, but we have long suspected, however, that Shelob, the tarantula at the zoo I used to work at, could identify the staff who generally handled her. We did handling sessions, where we’d hold the hand still of the person who wanted to hold the spider (because people will just jerk their hand away without warning), but she’d almost always walk fast across a stranger’s hand but stop still on the staff members’. Maybe it was purely down to steadiness of the person (I guess unfamiliar people were a lot more likely to tense up), or possibly scent.

When she’d just shed her skin, she didn’t like being picked up, and would do a threat display where she raised her front legs as soon as anyone opened her cage if she wasn’t OK with being held that day. One time a staff member, when faced with a group of people who had come specially to hold the spider, pushed it and tried to pick her up anyway. She jumped, grabbed his finger with her fangs…

She could certainly have given a proper bite if she wanted. The species is perfectly capable of doing so in general, and she was a large, maybe 10 year old, adult.

Again, it’s difficult to say anything regarding insect or spider intelligence, but it was hard to interpret that as anything other than ‘I don’t want to hurt you, but stop’ and conclude that she in some way recognised the person (or maybe situation) as unwelcome, but not a threat.

The O.P. cannot have condition #2 satisfied. While many reptiles eventually become conditioned to recognize an individual as a non-threat (usually, whoever feeds 'em as you may expect) they’re not going to obey a master in any sense. Best way I’ve heard it explained is that, to a snake, I’m basically a warm tree. Any snuggly behavior is the response of a cold-blooded animal seeking the heat we pour off our skin.

Insects won’t even be capable of that level of conditioning (e.g. “ah yes, this moving tree is not a threat and sometimes has snacks, very good sir”) although I have heard tarantulas may achieve this after years of handling by the same owner.

That being said, there are plenty of critters that satisfy the other requirements. Tarantulas get instant nominations because of their longevity and size, which makes them easier to handle than, say, ants. Several beetles get huge, including 2 species of rhino beetle native to the U.S.

Personally, my favorite is the orchid mantis, which seems to be growing in popularity recently thanks to videos and pictures hitting social media. I’ve seen them for sale at a local herp store (the DFW Reptarium) although they ain’t super cheap:

That site also lists care facts for several other species of insects, such as walking sticks.

Back in the 1960s my grandmother had a pet beetle she brought back from Mexico. It had jewels glued on its back and a tiny chain with a pin. She wore it on her blouse and little Pedro would slowly move around. She kept him in a small terrarium and he dined on a slightly rotten hunk of wood that came with him. He lived several years. 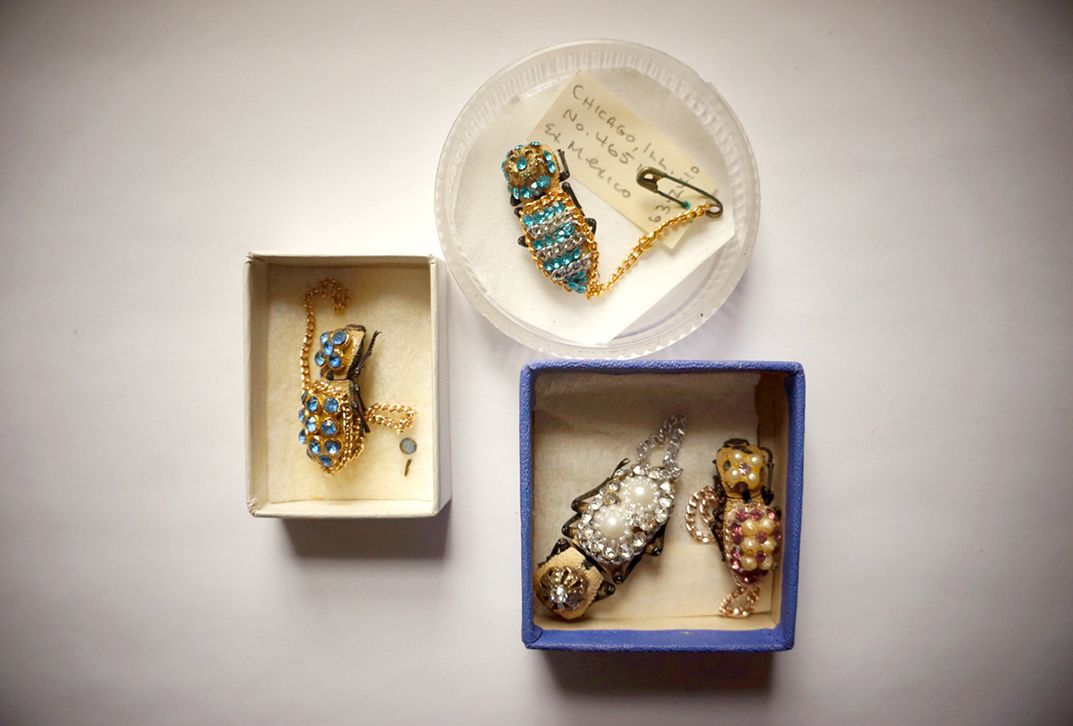 Meet the Makech, the Bedazzled Beetles Worn as Living Jewelry

I don’t know that insects, and reptiles for that matter, have the capacity to be tamed and recognize you as it’s master. They can be kept as pets for sure, but they are not capable of being cuddly and interactive the way birds and mammals can be.

I know an iguana who is very cuddly and interactive. I’ve heard certain other large lizards like tegus can also be friendly and somewhat sociable.

Get an ant farm. They are very interesting to watch. Not gonna ever do your bidding, though.

When I was a kid I raised all kinds of insects, especially praying mantises. I loved watching them devour each other while they were having sex.

Until one day the ootheca (egg mass) hatched, and there were hundreds of tiny praying mantises all over the house. I had to move everything to the garage.

I don’t think any of the mantises recognized me. I was probably that huge monster that appeared now and then.

Other than dogs, I’m not sure any animal recognizes a human as the master.

Depends on how you define “master”, but it’s been proven that at least some birds can recognize individual humans.

Purely anecdotal, but my current conure has learned the names of some individual humans and uses them appropriately. Whether or not he considers us “master” is another question, from his viewpoint it might be more a co-equal or him being in charge. His English isn’t up to explaining that in detail.