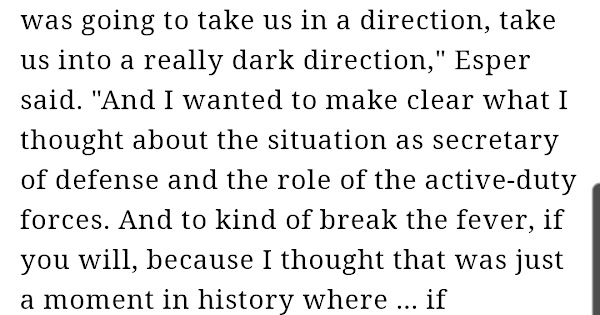 We know if you’re Donald Trump and you want troops on the streets for a Portland police station, you definitely want them if everyone is being mean and taking your job from you.

Based on McConnell's remarks, the leadership of the GOP does not view President Trump as defeated and will not address President-elect Biden as president-elect. And the defiant rhetoric of Trumpism infused the majority leader's speech. https://t.co/WrET78RORL 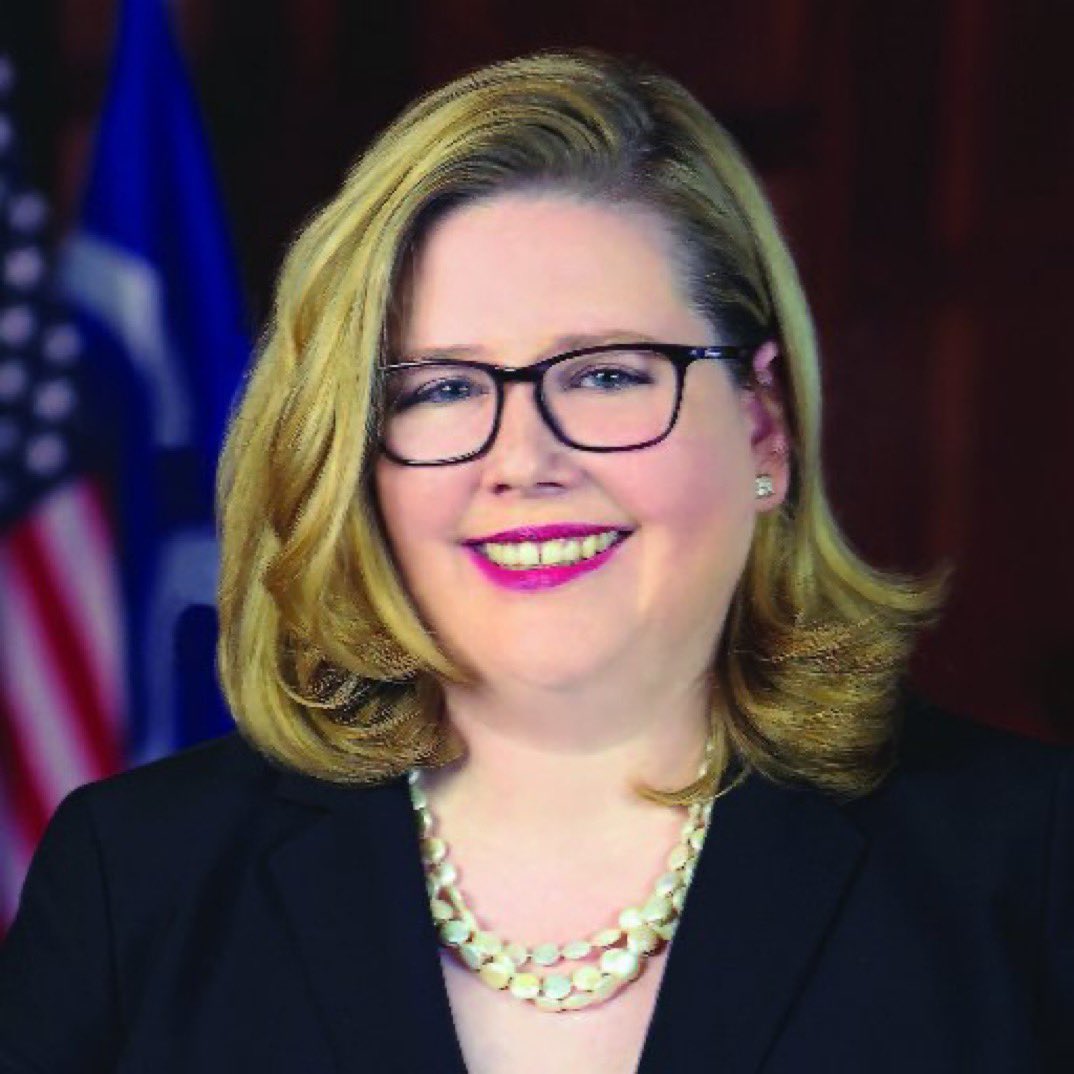 This is Emily W. Murphy. She’s a Trump appointee at the GSA who is declining to sign the letter authorizing the Biden transition to begin. Give her a call and tell her you want Biden treated like every other president-elect. 1-844-472-4111

Guys, in my opinion, we are seeing the beginnings of a coup. Will it collapse? Will it succeed? Am I off my rocker (I hope so!)? Do you need more evidence, more time to make a determination?

This is the thread to keep track of this and, like my WW3 thread earlier this year, I’m completely hoping that I can laugh with you, at me. Soon.

Yes, I think you’re totally off your rocker. But I’ll still be watching what happens anxiously.

I’m not afraid to make the call!

It’s hard to say. The reassuring explanation is that the Republican Senators are just playing to their base by pretending that there is some chance of Trump prevailing in the courts, and that once he fails to do so, they will move on and let the MAGA crowd blame the judges instead of them.

And I think it’s likely he just fired Esper because he was pissed and he’s a whiny little shit. After all, he is the Commander in Chief, and if he is actually planning a literal military coup, the outcome will depend on whether the military goes along with it or not. I don’t think at that point it really matters who the Secretary of Defense is.

So, on the one hand I don’t think the things you point to are necessarily ominous signs. On the other hand, if I imagine a universe where Trump WAS planning a coup and ask myself what would look different, I’m not thinking of anything too convincing.

For Trump to pull off a coup he needs the support of most of the military.

If our military is ready to line-up behind Trump and do this…or even consider it…we’re all in trouble.

I cannot believe the generals would go for this or their troops would fall in line under them to do this.

I agree with Thing.Fish. Trump would attempt a coup if he thought he could get away with it. He certainly doesn’t give a shit about process or legitimacy, only power. It’s plausible that he thinks his current actions are the ones to take him in that direction. I expect he is wrong about that.

The Republicans are mostly remaining silent because they are obsequious toadies and Trump is likely to continue to wield considerable king-making power as the loudest asshole in the right wing media world for some time.

0% chance of a military coup but there is certainly an attempt at a political one. Mostly likely they are trying to steal the electoral college. If they can plant 40 trump voters in the Biden side and give them the fig leaf of correcting an illegal election then trump could get a second term. They are certainly working with state governments to see how far they can go with each one to affect the electors.

Honestly, that seems like even longer odds than a military coup. Electors are long-time party stalwarts, and Biden is as mainstream Democrat as it comes. The idea of faithless electors was a pipe dream when people hoped it would keep Trump out of power in 2016, and it was at least surface-level plausible there, in that Trump was demonstrably unfit and lots of old school Republican party officials disliked him.

As we discussed in another thread, it’s theoretically possible that the GOP-controlled legislatures of some States that Biden carried might decide to overrule their voters and just appoint Trump electors, and that the Supreme Court might let them get away with that. But AFAICT all the actual GOP legislative leaders in those States have shot that idea down with extreme prejudice.

The 2 Republicam Senators who are facing a runoff in Georgia are now demanding the Republican Sec of State (for Georgia) to resign because of voting irregularities. 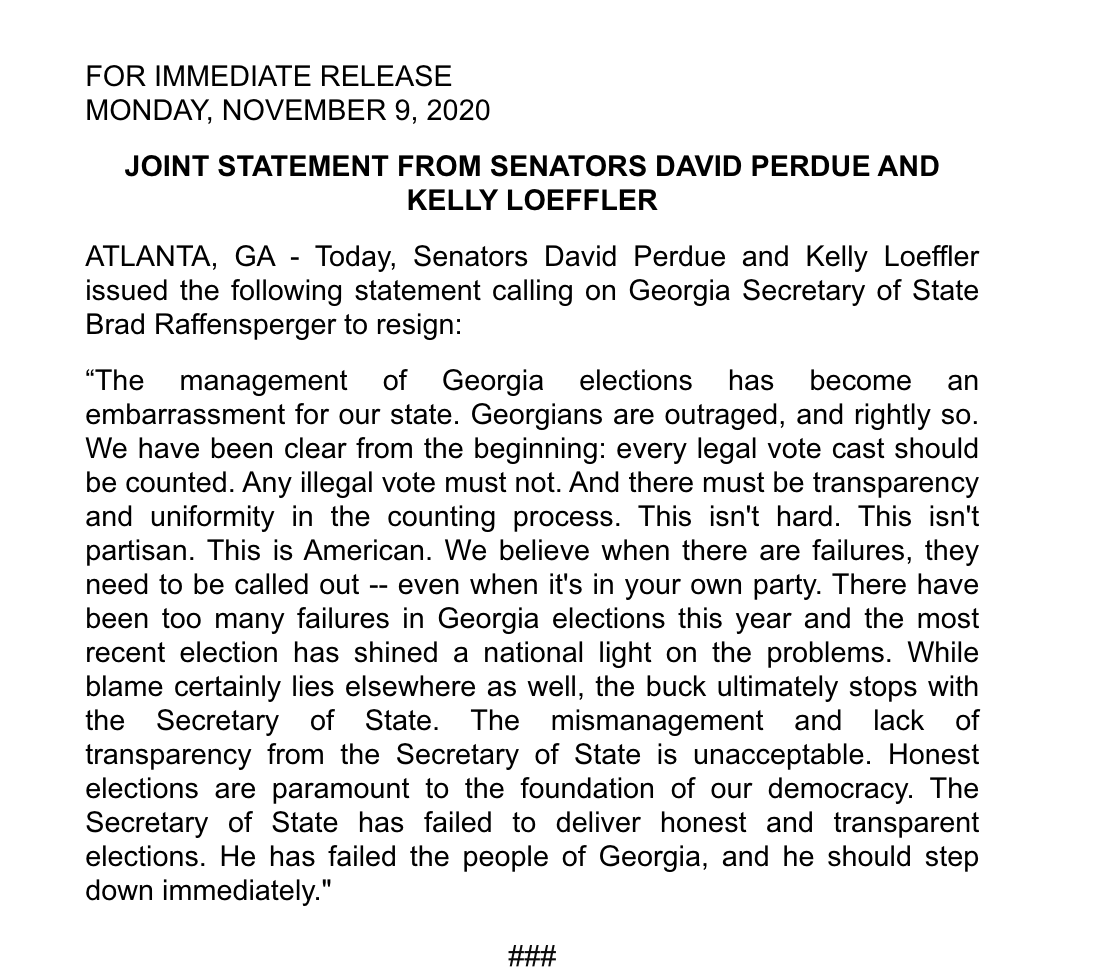 This is absolutely bonkers. Georgia's two Republican U.S. Senators are calling on the Republican Secretary of State to resign because they believe - without evidence - that he "failed to deliver honest and transparent elections." #gapol

This is absolutely bonkers. Georgia's two Republican U.S. Senators are calling on the Republican Secretary of State to resign because they believe - without evidence - that he "failed to deliver honest and transparent elections." #gapol pic.twitter.com/IzMXsvZ3eC

If he does, in fact, resign, this may be the GOP’s first victory in the political coup mentioned above.

He has already responded that he will not resign.

Electors are long-time party stalwarts, and Biden is as mainstream Democrat as it comes.

The Republicans have been laying the ground work to steal the election this way. As @Thing.Fish say at least outloud the involved politicians have said no way. I’d say there is a better chance of this happening if they at least have a bandwagon to join saying the election was stolen in their state. Certainly better than a military take over in support of trump.

The end of that article points out that the result would be Pelosi as acting President.

I don’t think that this scenario has 0% chance of happening, I just think that it’s very slim, and an actual military coup (which is also not 0%) is more likely.

This would require the SC to declare a Federal statute (which forbids changing the manner in which electors are chosen after the election has taken place) unconstitutional. Which is not outside the realm of possibility, especially given the highly politicized makeup of the court; still, I’d lump it in with the other “if it happened this way, we’re already goners” scenarios.

I just think that it’s very slim, and an actual military coup (which is also not 0%) is more likely

Trump would need significantly more military support to pull off a coup. Admittedly, this article is from August but he was running 49.9% disapprove and the officer corps tend more D than the rank and file. He’s got more support in state governments saying the election was stolen than in the military

Like the thing to realize here is that there is probably a real attempt at a coup, but also that it’s being run by the people who accidentally booked a landscaping company parking lot instead of the Four Seasons hotel for a press release.

Let us all give thanks that our wannabe authoritarian masters are as bad at things as they are.

Well, this is fairly terrifying. The Guardian reports:

The US attorney general has told prosecutors across the country to pursue “clear and apparently-credible allegations of irregularities” in the voting system, despite a lack of evidence that such fraud is occurring.

In a memo obtained by the Associated Press, Barr – who has not shied away from violating norms in his efforts to prop up Donald Trump – told attorneys that investigations “may be conducted if there are clear and apparently-credible allegations of irregularities that, if true, could potentially impact the outcome of a federal election in an individual State”, the AP reports.

States have another month to resolve election disputes before members of the electoral college finalize the outcome on 14 December.

Barr’s move “gives prosecutors the ability to go around longstanding Justice Department policy that normally would prohibit such overt actions before the election is formally certified”, according to AP.

if it happened this way, we’re already goners” scenarios.

No disagreement here. I’m certainly not saying my scenario is likely or wouldn’t break the country or constitution (hence calling it a coup). I would say my scenario is probably around 1% maybe less.

Oh, that actually makes me feel a little better.

I think they’ve telegraphed strongly all day that this is just their petty butthurt revenge for the Russia investigation- and they’re just being mean to the horrible left wing mob by not giving in to their election.

Joe’s going to handle it well, his ability to just totally ignore this stuff is one of his strong points.

I agree that Trump doesn’t have the military on his side. The new Secretary of Defense doesn’t seem like he is the sort to order the military to launch a coup. IMHO the chance of a military coup is less than 0%, by which I mean that the military is likely to side with Biden in the event of a civilian launched coup.

The key people who need to fall in line are the civilians already mentioned above, especially Emily Murphy. Others include the heads of the Republican legislatures in Pennsylvania, Wisconsin, Michigan, Georgia, and Arizona. Will they ignore the voters of their states and appoint Republican electors? Will John Roberts refuse to show up on 1/20/2021 to administer the oath of office to Biden? Will William Barr order the arrest of people like the above mentioned Georgia Secretary of State?

I think the odds of any of these things are low, but not zero. My guess is that the chances of Biden having to order the military to put down a civilian coup are somewhere in the range of 0.1 to 1%.