It’s a dumb position. But I wouldn’t put it past them.

It doesn’t matter because the intention was never to convince the general public that there was some kind of electoral miscarriage. The purpose of the audit wasn’t to uncover any actual irregularities or a reveal vast conspiracy against Trump; it was just to keep the idea that there might have been some vague wrongness in Trump’s loss and to keep the base of conspiranoists energized regardless of the outcome. It is like a movie studio trying to generate ‘buzz’ about a film everybody knows is going to be crap just to get people to pay money to go see it even or perhaps especially because it is going to be a disaster. And because the ‘mainstream media’ is eminently pliable and willing to continue to give Trump & Co. endless free press despite the constant whining about their supposed bias, they’ve given ridiculous amounts of coverage to this absurd recount conducted by ‘Cyber Ninjas’, a company with virtually no background in electoral audits run by a conspiracy theorist.

I’m not sure what the term for this attitude is, but I’m sure all outcomes lead to confirmation bias for Republicans.

Audit shows Biden won = see, we told you, the powers that be are corrupt and are in the pocket of the D’s

Always remember, the goal here is NOT to show that Trump won. The goal is to undermine faith in elections. I expect that the report will not specifically find that Trump won, but that the results were so riddled with fraud that no determination could be made. The goal is to set the stage in future elections to claim that no fair determination can be made in the election, so that Republican state officeholders and judges can determine by fiat who will be declared the winner.

The number of threads we have had on this topic, including one started by me, demonstrates what a remarkably bad idea it was for the State Senate to undertake this effort and to use the team they used. They have dug in deeper to a very misguided strategy that only appeals to wacko conspiracy theory nuts who already believe in false results and cannot be dissuaded. It might additionally lose them other sane moderates who lean conservative but will stay home before they fight for this loopy crap.

I realize the likely goal is to create so much disinterest and distrust that elections become less significant. But swinging for the fence on this one means they do have to steal all future elections because they sure as hell are not going to win them any longer. It is an awfully strong all the eggs in one basket move.

Of course, I continue to expect too much from them. I lament the lose of a sane Republican Party the way people wish zombies were not undead. A completely useless effort; I am coming to accept the possibility they are not soon coming back to reality. In fact, it seems they would rather burn down the whole barn than let the “Socialist Left” have one stall in that barn.

They have dug in deeper to a very misguided strategy that only appeals to wacko conspiracy theory nuts who already believe in false results and cannot be dissuaded.

AKA, the Republican base.

The audit was a success – it proved cover for multiple states to pass voter suppression and voter disenfranchising laws.

I would really like to see an audit of the red counties, where I suspect the real fraud is. IDK why they are just looking at blue districts, it seems like a great opportunity to check all. 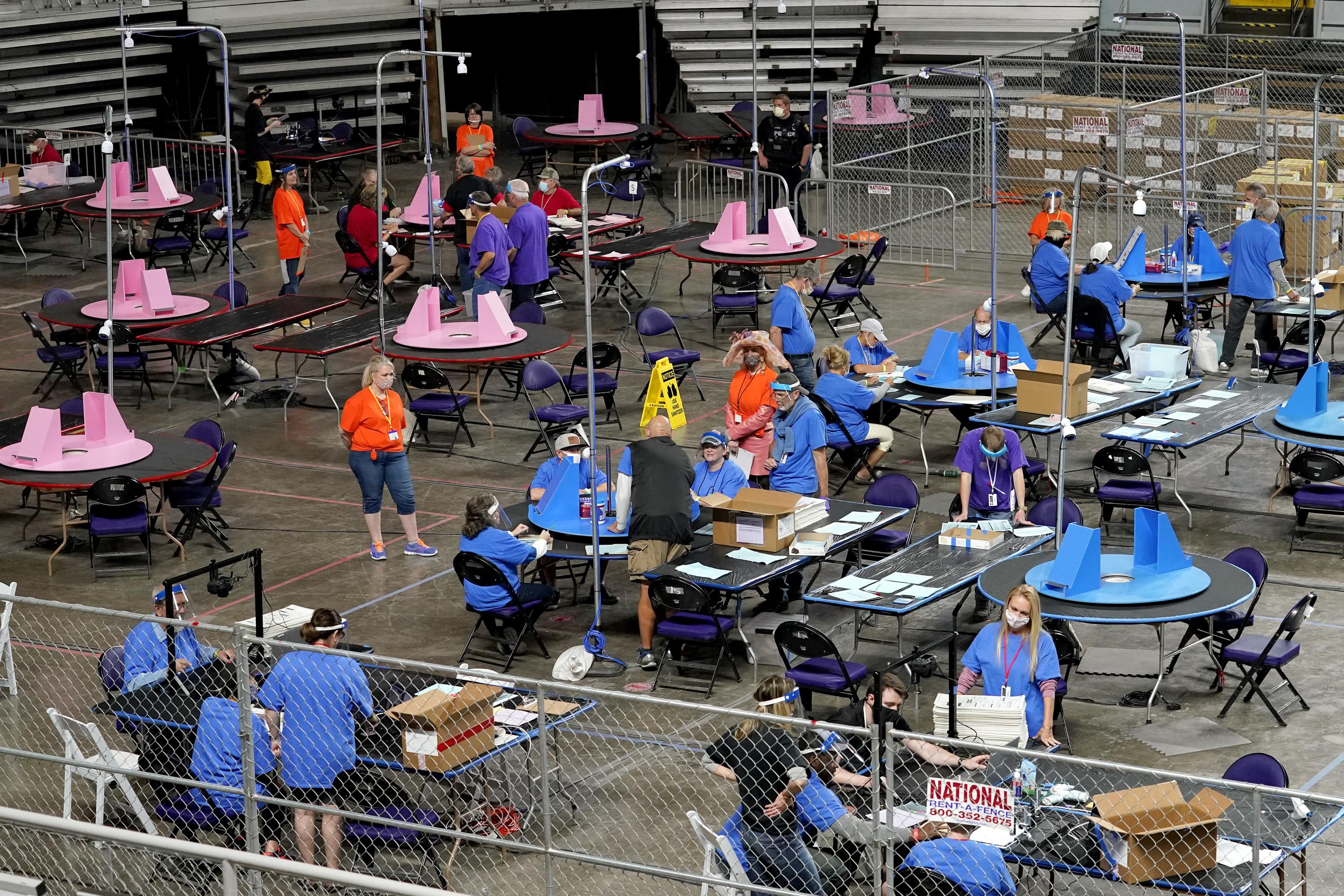 PHOENIX (AP) — A cybersecurity firm plucked from relative obscurity to conduct an unprecedented review of ballots in Arizona's largest country is readying to present its findings to Republican lawmakers.

The auditors recruited workers from Republican activist groups and did not live up to promises to screen them for biased social media posts. A former Republican state lawmaker who was at the riot at the U.S. Capitol on Jan. 6 was spotted counting ballots for several days. His unsuccessful state House race was on thousands of the recounted ballots.

They were expected to report today, but I find no indication that they have.

They were expected to report today, but I find no indication that they have.

You can’t make this shit up:

A dubious review of millions of ballots cast in Arizona’s largest county will be delayed after three members of the company involved in the effort contracted COVID-19, according to a top Republican state lawmaker.

I suspect this is the new ‘The dog ate my homework’.

I’m sure they will have the results in two weeks.

The article quotes the AZ Senate President as saying that the CEO and two of his team are “quite sick.” I’d put the odds of them being vaccinated at less than 1%. Can you imagine the conspiracist shit-show that will go down if one or more of them croaks?

the CEO and two of his team are “quite sick.”

Yeah, and they caught COVID.

I suspect this is the new ‘The dog ate my homework’.

“After careful analysis the results are inconclusive.”

Not everyone feels the same.

Stephen Richer, the Maricopa County Recorder (and Republican) has (for the second time, he has more patience than I) released a 30 page pdf detailing the count for the 2020 Presidential election in Maricopa County (where the ninjas were auditing) complete with attributions and sources.

“Maricopa County has used the same tabulation vendor and ballot printer, and has had many of the same employees, for more than 20 years. This team oversaw Maricopa County’s vote for Trump in 2016, for Mitt Romney in 2012, for John McCain in 2008, and for George W. Bush in 2004. It administered the election of the continued Republican control of the Arizona state legislature in 2020. Through all these elections, there had never been a report of significant tabulation problems or widespread fraud.

“After the November 2020 election, appointees from the Republican, Democrat, and Libertarian parties worked in bipartisan groups of three to hand count more than 47,000 votes … Those hand-counted votes matched the machine count 100%. The County then ran another, post-election, logic and accuracy test to make sure the machines had not been disrupted in any manner during the election. The results again matched 100%.

“Finally, in February 2021, the Maricopa County Board of Supervisors hired two professional elections technology companies with many years of experience in tabulation equipment to do everything needed to do. The assessment took almost three weeks. We livestreamed the entire process, and we had representatives from the Arizona House, the Arizona Senate, and the Secretary of State’s Office in regular attendance … The auditors found no problems with the equipment, no manipulation of the software code, no malware, and no connection to the internet. Those reports are publicly available.”

Stephen Richer, the Maricopa County Recorder (and Republican) has (for the second time, he has more patience than I) released a 30 page pdf detailing the count for the 2020 Presidential election in Maricopa County (where the ninjas were auditing) complete with attributions and sources.