In Antifragility, Taleb talks about an experiment that occurred in a small Netherlands town where traffic lights and street signs were removed. Allegedly, this deregulation led to an increase in safety as a sense of responsibility and danger made people pay more attention. This libertarian dream also might apply to pilots being less safe in automated planes since pilots might lose alertness. If this is so, one wonders about long term problems in driverless cars.

This sounded strange but the experiment was tried in Netherlands and Germany and initial successes were claimed. Since I have not heard of this I presume not everything has been smooth sailing. 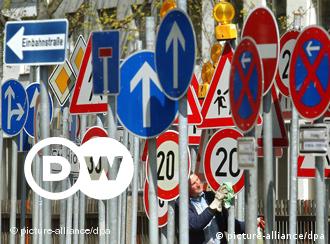 Towns in Germany and the Netherlands are beginning to remove road signs in the hope of decongesting roads and making travel a less confusing experience.

I suspect it works best for local traffic in small towns (or specific smaller areas within larger towns and cities) with narrow streets - and with a universal low speed limit.

I doubt if it would work in large cities with heavy freight and long-distance through traffic.

In my own part of London, I do notice a lot of cluttered street furniture as different things have been done at different times to meet some particular perceived problem, but no-one’s done a comprehensive review/redesign.

I suspect it works best for local traffic in small towns (or specific smaller areas within larger towns and cities) with narrow streets - and with a universal low speed limit.

I doubt if it would work in large cities with heavy freight and long-distance through traffic.

I bet this is the answer. In my area many intersections were converted from standard traffic light style to roundabouts, which is supposedly another method to increase traffic safety by giving people more responsibility to self-regulate. And it might be fine at the roundabouts with lesser traffic (though I’ve had many close calls with people not knowing what they’re doing in a lot of the roundabouts).

One roundabout with particularly high traffic though, is notorious for accidents. So much so that the traffic commission took the decidedly non-intuitive step of putting up sight barricades so you can’t see oncoming traffic until you get right up to the roundabout; the thinking being that when people could see the oncoming opposing traffic they underestimated the oncoming vehicle speed and overestimated their ability to ‘beat’ it. So the barrier was supposed to make drivers more cautious. Haven’t heard if accidents have gone down because of the barriers but I’m kind of doubting it.

I’ve heard about this, and seen it, and it appears to work. Another form of it called ‘traffic calming’ also is seeing success. The problems with it however are people want order, and also want a clear path to who’s at fault.

If my own experience with driving when the power to the traffic signals goes out is any indication, this experiment would be a disaster in the United States. 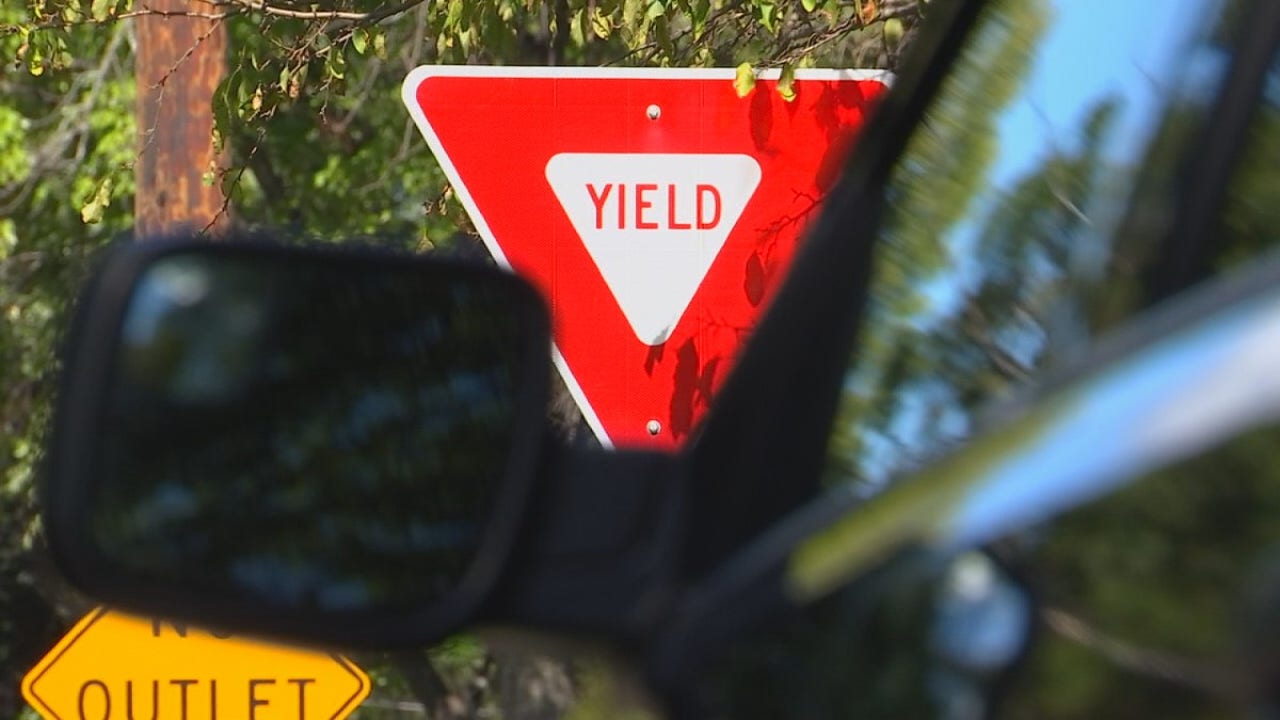 Over the past few years, the city of Crystal has attempted to transform the flow of vehicles through its residential neighborhoods with a particular focus on traffic controls at intersections.

Almost all of the stop signs in my neighborhood have been replaced with yields and I truly haven’t seen any difference. Still the same amount of “swing and a miss” almost accidents.

Note that the Netherlands has a high proportion of non-car traffic in the form of bicycles, so drivers there may already be pre-primed to being more cautious than elsewhere.

I suggest this experiment be tried somewhere else, like a large American city. Then we’d have a good basis for comparison.

Yeah, a comparison to the Hindenburg disaster. “Oh the humanity!”

They did this in London on Exhibition Rd in the Kensington Museum Quarter to try to get large numbers of pedestrians and vehicles to share the same limited road space. 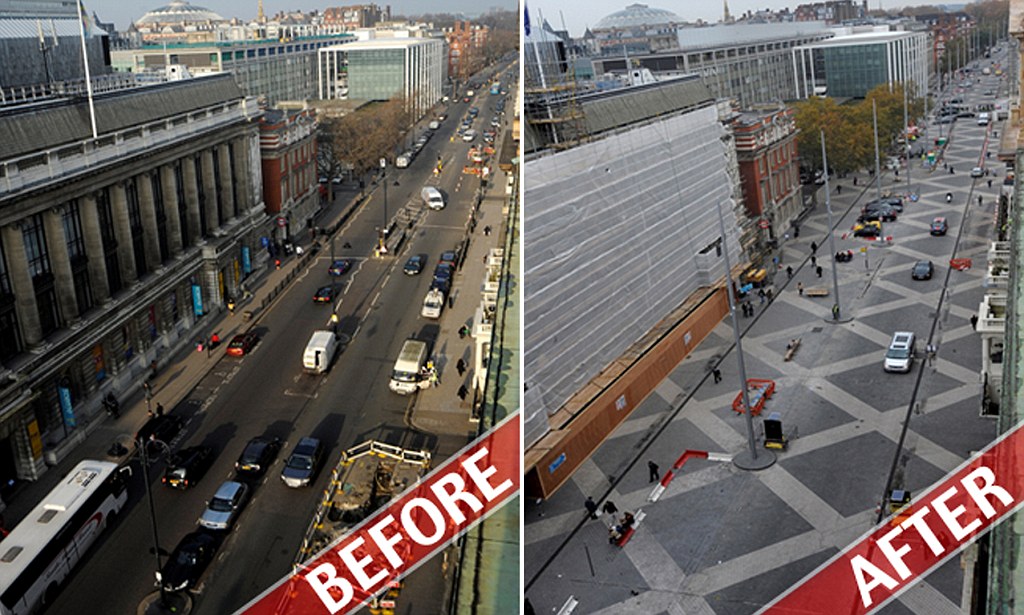 Indeed, the newly revamped Exhibition Road in the heart of London’s museum quarter in Kensington, visited by millions of people from around Britain and the world, doesn’t even have kerbs or pavements.

A great debate was had, there were legal challenges, architects drew up grand designs and much money was spent.

It seemed to work pretty well.

But the basic problem is there are too many vehicles on the roads and some city centres are desperately congested. The big trend at the moment is to introduce congestion zones in city centres where if you want to drive, you have to pay a charge, especially if you have an older air polluting car.

This should go hand in hand with pedestrianisation of major shopping areas or make them bus and taxi only. It is the sort of issue that gets debated regularly in London. At Christmas they sometimes close the major shopping thoroughfares like Oxford St and Regent St to traffic. It is so nice not to worry about being mown down by a bus some crazy driver.

However, it all requires some joined up thinking and policy making and there are vested interests who object.

If only it were a case of tearing down a few signs.

The roads in European cities are far narrower than the US. There is much less room to play with.

Germane to this: Tullock’s Spike

Another form of it called ‘traffic calming’ also is seeing success.

They tried something they called “traffic calming” on a street near my mom’s house. Basically, they put in rules that you were allowed to drive on the street, but you weren’t allowed to turn onto it, and if you were on it and got to an intersection, you had to turn off. To remind everyone, at every intersection, they blocked off the right lane with cones. It worked about as well as you’d expect.

They tried something they called “traffic calming” on a street near my mom’s house. Basically, they put in rules that you were allowed to drive on the street, but you weren’t allowed to turn onto it, and if you were on it and got to an intersection, you had to turn off. To remind everyone, at every intersection, they blocked off the right lane with cones. It worked about as well as you’d expect.

That doesn’t sound like traffic calming at all, and sounds opposite to how it’s suppose to work.

I knew a traffic engineer and said the traffic control devices such as traffic lights and stop signs change the type of accidents rather than prevent them. Putting in a stop light reduces the member of side collisions but increases the number of read endings, for example. He didn’t get into the percentages.

Here in the small city and surrounding countryside in Taiwan, people already ignore stop signs on small roads, and there are lots of accidents. Removing them would just mean open season on people riding motorcycles.

Round here, it’s done with things like speed bumps, road narrowing, rumble strips and converting some streets to pedestrian-only

They divide long straight roads into sections where you are obliged to stop and look left and right. They introduce high kerbs to make sure you do this if you don’t want to damage your car wheels. It stops the ‘boy racers’ from putting the pedal to the floor as soon as they see a bit of straight road.

I my area of London, they also implement something called a mini-roundabout at cross roads, which is about a 5ft in diameter, they are raised, but you can drive over them. Cars are supposed to stop, give and give way before turning. They don’t work so well. Some drivers just plough over them, especially if it is a big SUV. Drivers also get a bit confused and accidents are common.

I think just about every kind of scheme has been tried to calm traffic and reduce speeding. However, the ‘remove all signs’ approach is growing in popularity. Though it tends to be applied in area where there is a very high number of pedestrians trying to cross roads than need to be open to traffic. They introduce an element of uncertainty in drivers who slow down when they are not sure what they can do. Rumble strips are good at persuading drivers to slow down. So too are automatic signs with radar that show your speed in big red letters if you break the speed limit.

Driving in densely packed European cities with narrow winding roads is quite a challenge negotiating these hazards. In London there are cameras everywhere and if you make a mistake you get your photo taken by a roadside camera and you get sent an automatic fine. This punitive approach is a very popular revenue earning opportunity for local government and on a bad day you can lose your license as well as getting fined. There is also few places to park unless you can pit your wits against the traffic wardens and the arcane rules. City centres are pretty unfriendly to car drivers and it is getting worse each year. They were simply not designed to handle the level of traffic they must carry. The policy is to make car ownership expensive and difficult and price drivers off the roads.

If this is so, one wonders about long term problems in driverless cars.

If a car has no driver, there’s no possible way for a reduction in alertness to have any effect. Some of these cars won’t even have steering wheels.

As for the question, 30+ years ago, most of the suburbs near where I grew up (CA) had no stop signs. You were expected to treat every intersection as a yield. It didn’t seem to have caused any accidents, but since then pretty much all of them have been converted to 3-way or 4-way stops. One wonders if anyone actually measured how the accident rate changed.

I first thought that, but then decided the same thing might apply to automated airlines. That is, there may be rare occasions with tough weather or whatever unusual condition where the driver has to get involved or even drive, and that this is harder to do the less one does it.

It’s definitely possible for the intermediate stages of self-driving, where people are expected to take over in unusual conditions. But that’s definitely not “driverless”. No human input at all–besides setting the destination–is the goal.

I think pilots may face a more serious problem, because autopilot can handle flying for long durations with no input, but it still cannot do a full end-to-end flight. So basic flight skills may end up being neglected.

Time will tell how much faith one should have in driverless technology. Have they sorted out the liability issues anywhere?

Guess this wouldn’t work in Saskatchewan.