The insanity of my Blackberry Pearl

I’ve spent hours- literally- scouring the web for the logical fix for this. Now I turn to the Dope.

I’ve recently gone to a Blackberry Pearl from a Treo. The Pearl, like many Blackberry devices, uses an incredibly rare 3.5mm stereo headset jack. This means that in order to use a wired headset, one must find one with 4 metal bands and 3 insulating black bands. This will allow both ears to be used and a microphone to be used. One might argue that I’m being overly selfish in wishing to have stereo incoming audio, and why can’t I just settle for one earpiece and a mic like everyone else. I would settle for that- gladly- but there is a major connectivity problem with that solution.

The only headset that fills that bill is the OEM one that came with the Pearl. However, it is an earbud device and my skull doesn’t play well with earbuds. Never has. Never will. I’m an over-the-head headset kinda man.

Physical adaptors? No sweat- Radio Shack, etc. The problem is that they are all mono. They call themselves stereo because there are three bands- but lacking the fourth band, a mic cannot connect.

Similarly maddening is the fact that nobody MAKES over the head headsets with a mic. One might think that the world is teeming with them for computer use but alas, one would be incorrect. Every single stereo headset with a mic that I have found has two physical separate 3.5mm jacks. One for the headset/audio side and one for the mic. These two jacks go into ports on yer average computer sound card. Useless- the Pearl has but one 3.5mm jack.

Yes, I am jonesing a Jawbone. Bluetooth solutions are not the issue here. The issue is that try as I might, I can not find a single headset with a stereo jack with a mic band. Alternately, I can not find a 2.5mm to 3.5 mm adaptor plug that has all four bands.

Anyone ever seen one???

I would be glad to go to Radio Shack and solder up my own jacks, but the shack does not sell this type of connector with open leads. At least not my Radio Shack and their web site is atrocious. Search as I might, I cannot find a jack with 4 bands and 3 insulators. That woulda been simple. Cut open a headset jack, separate out the wires, solder to the proper leads on a 4-band stereo headset jack and Bob’s your uncle.

The Blackberry Pearl has a hole in the side of it for a 3.5mm stereo jack.

The item you linked to converts 3.5mm down to 2.5 mm. I bought one of those, making the same mistake you made.

How about the solution at http://forums.wireless.att.com/cng/board/message?board.id=rim&message.id=16311 ir is that going the wrong way again?

The exact reverse of what I need. What everyone needs. I swear, this is a real “Gaslight” moment. This is a real Blackberry phone, and I got it at a real Verizon Wireless store.

Give these a shot. They work for my pearl.

With its flexible behind-the-ear wearing style, the C220s gives you the freedom to enjoy the best in stereo sounds and at the touch of a button use your mobile phone. It comes with an adaptor for use with music...

Mangetout, That might have promise. It appears to have a stereo jack, and may well convert the mic line down to the proper band on the male end- which does look like a 3.5mm male jack. I will order one and try it out. The text is ambiguous and I know that if I call the vendor, I will speak to an utter nitwit whose sold job it is to talk me into buying more of them.

Kaotic Newtral, the link you provided clearly says at the top in huge letters, " 2.5mm ". How can you have a Pearl that uses a 2.5mm jack when mine is brand new and uses a 3.5 mm jack??

This is what is maddening- that Blackberry seems to have altered their newest models to a larger jack size, therefore cutting out 99 % of all hard wired headsets with a mic from being used.

Mine has a 2.5mm jack…it is older. Sorry for misreading your post.

In this review of the phone…they’re listed as a 2.5mm diameter. Maybe the newer ones got the 3.5mm. I’ve found that finding 2.5mm headphones was maddening and everything else was 3.5. 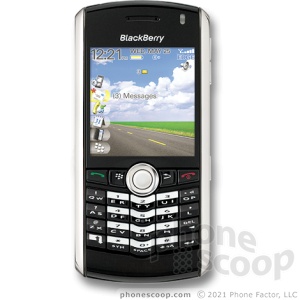 RIM's first BlackBerry with a full set of multimedia features for consumers. Upgrades over the 7100 series include a camera, memory card slot, music player, and voice dialing. The 8100 series is also lighter and thinner, and replaces the scroll wheel...

Mangetout, That might have promise. It appears to have a stereo jack, and may well convert the mic line down to the proper band on the male end- which does look like a 3.5mm male jack. I will order one and try it out. The text is ambiguous and I know that if I call the vendor, I will speak to an utter nitwit whose sold job it is to talk me into buying more of them.

It looks like it plugs into a 3.5mm jack with four conductors and provides two sockets - an ordinary 3.5mm three-conductor headphone socket (into which any standard portable headphones should fit) and a 2.5mm two-conductor mono microphone socket. This means that there will presumably be a common ground between the microphone and headphone sockets, as there are a total of five conductors out vs four in.

All this is on the assumption that there is some standard for wiring four-conductor jacks and sockets, and that Blackberry have adhered to it…

Good point. I like to believe that there IS a standard. Here’s why: ( aside from pure stubborn need to believe this… )

My mono Plantronics headset plugs into a Treo 700. This phone ALSO needs a stereo jack. How do I know? Because 3 Treo units and 4 headsets after I tried my first new Treo 700, the common thread was that a mono headset with mic did not have enough connectors to make it to the bottom of the jack. No stereo jack, no mic. It was maddening. I’d make a call and I could hear perfectly. No sweat. I talk, people say I sound like I am underwater. Or they say, you are in a tunnel.

I figured I had a bad phone. So I swapped phones. Then I swapped another NEW headset for the first new headset. Same problem. Then I try unplugging and replugging whilst speaking. A false positive. I would turn the phone on it’s upend and unplug and as I did so, say, " does this sound better? " and uniformly they’d say oh yes, you sound clear. Then I’d put the handset down very gently and they’d say, " Whatever you just did, it’s as bad as it was."

Took a third new Treo 700 to discover that I sounded “better” when unplugging and replugging because the mic is on the bottom- right next to the headset jack- and I had been holding the Treo upside down to do the unplug/replug. Why did I sound better? Because the mic was momentarily pointed up to my mouth.

Gah !! So, after looking around fuh-evah for a headset with a stereo mic, I was offered a new phone. By Verizon. Any one I wanted. I already HAD a new phone. That wasn’t the issue. So I went for the Blackberry Pearl and in doing so, have traded for a bigger problem.

Nobody MAKE that headset any more.

looks down at Curve

Ah, so that’s what that hole is. Indeed.

I don’t know if this helps at all, but the three-conductor jacks (the ordinary stereo ones) are also known as TRS connectors (standing for Tip, Ring, Sleeve). I believe the four conductor ones are called TRRS connectors - this might help in the search

(That’s a UK store - if they won’t ship to you, and you want that and can’t get it elsewhere, I can help)

Furthermore, the second item down on this page:
http://www.remtrak.com/av/4pole.htm

Help me? My email’s in my profile. Oooh, man. Good Google-fu. How’d you find these?

Gah! I just saw an article about 2 weeks ago on Boygeniusreport (or Engadget) about some nokia headphones that were those big ass over the ear 70’s style with a mic. They looked great. My google-fu is weak today however.