There are some who claim that man never landed on the Moon.
They say we did not have the technology at that time to do it.
Well, yes we did.
The U.S. had been using rockets for decades and science was booming in the 1960’s.
Space travel was real and we had the ability to get to the Moon.
If the Moon landings were faked, then you would have to involve a great number of people and someone would have talked by now.
Telescopes have seen burnt marks on the Sea of Tranquilty where the Eagle landed in 1969.
Those marks did not get there by themselves.
Pictures that seem to have evidence of the fake landings are comical.
One has an astronauts’ face shield showing a reflection of a camerman.
When enlarged, that cameraman was a Photoshop image, and a bad one at that.
Conspirators will stop at nothing to try and convince you, even if they have to fake an image.
Conspirators are funny people.
Some claim that 9/11 was an inside job.
Others say that JFK is still alive and they have evidence to prove it.
If they are right, then I will have to believe that Elvis and Michael Jackson faked their deaths and are out there somewhere.
I did read that Elvis was working at a car wash in Michigan.
The fact is, that it is all a bunch of nonsense.
Those who say the Moon landings were faked have nothing but nonsense to show for it.
Thank you.

You won’t get much disagreement about that on this board.

In fact it sounds like you’ll fit right in. Welcome to the Dope!

You won’t get much disagreement about that on this board.

Heh. Yep. Preachin’ to the choir.

They actually landed on Mars but figured that would seem too fantastic, so they shot the moon landing on location in West Virginia.

Incidentally, our former Doper The Bad Astronomer mentioned that this 15th of February was the tenth anniversary of the infamous FOX “Conspiracy Theory: Did We Land on the Moon?” special. 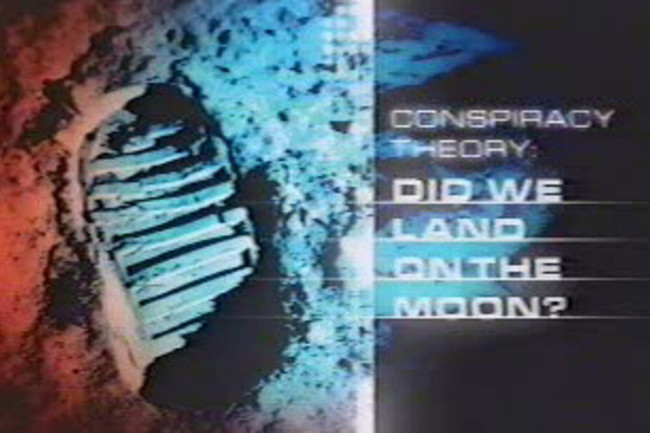 My friend and fellow skeptic Tim Farley reminded me that today is the tenth anniversary of Fox airing the TV show “Conspiracy Theory: Did We Land on the Moon?”

If I had to describe that show in one word, it would be “grotesquely distorting reality, an execrable steaming pile of offal that doesn’t come within a glancing blow of the truth.”

Was that more than one word? Well, it’s hard to find a single word that truly captures the feel of that program.

I remember that week pretty well, in fact. I had just started my job at Sonoma State University, having uprooted my family from suburban DC and moving 5000 km west just the month before. I was puttering around on my computer when the phone rang: it was my pal Dan Vergano, who writes for USA Today. He had some questions about Pluto, so we chatted for a while, and then he asked me that fateful question that would, quite seriously and in all honesty, change my life: “Hey, did you hear about this Fox TV show about the Moon landings being faked? It’s airing on Thursday.”

Ironically, at that time I had just finished writing about people who thought Apollo was faked for my first book, Bad Astronomy, so I was pretty familiar with the arguments. I was able to procure an advance copy of the show and watched the whole thing. It was like watching a snuff film, except the victims were 1) reality, and b) the immense effort of nearly half a million people to get Apollo off the ground and to the Moon.

I sat down and wrote a point-by-point dissection of the show, waiting until after it aired to actually post it on my site. I was upset, but didn’t think the page would help much; the web was still a bit shiny and new back then.

Ha! By Monday, the page was out of control.

It was one of the big reasons why I dismissed FOX as a source of information.

That proves FOX news has been trying to rewrite history since before Palin and Bachmann came around! Thank you B.A.

And welcome George! We hope to see you in the religious/political/NDE/Economy and current event debates too! Yeah, they’re frequent.

I recently read something that SF editor T.K.F. Weisskopf wrote: “I have come to realize I am not going to be living in the age of humanity’s great expansion into space. I will not be on the Nina, the Pinta nor the Santa Maria, let alone the Mayflower. Instead I am living in the age of St. Brendan and Lief the Lucky.”

The OP posted the same thing over at a site dedicated to debunking the moon hoax believers: apollohoax (he posted a Lee Harvey Oswald killed Kennedy essay there as well).

The OP posted the same thing over at a site dedicated to debunking the moon hoax believers: apollohoax (he posted a Lee Harvey Oswald killed Kennedy essay there as well).

Sometimes multiply posted threads are spam and sometimes they are just the outpourings of a sincerely interested individual.

That said,
George Vreeland Hill, this is a forum for debates, but you have set forth a topic on which only one in 30,000 or so posters who have ever posted here would disagree. (If you chose to start a thread asserting that Oswald assassinated Kennnedy, the people disagreeing would only increase to about 100 per 100,000.)

You might want to spend some time looking over the boards to find a topic that is actually going to be debated rather than garnering nearly universal head nods.

My guess is that George won’t be back, but I could be mistaken.

Maybe the government got him.

The government used to get people, but due to the current economic situation now they just send you nasty letters.

No, it makes him an agent of the lizard people, trying to fool us into thinking that that we really did reach the Moon. Which we naturally couldn’t be allowed to do or we’d have discovered their secret moonbase. Well, OK, theirs and the Illuminati’s base; they share. Those things are expensive.

The government used to get people, but due to the current economic situation now they just send you nasty letters.

So the men in black are in the red?

That proves FOX news has been trying to rewrite history since before Palin and Bachmann came around! Thank you B.A.

I never saw the program in question. Was it a product of FOX NEWS or merely a program on the FOX NETWORK?

I’ll disagree with a couple of statements in the OP. Telescopes have NOT seen burnt marks where the Eagle landed.

The image of the visor with the reflected image of the cameraman is genuine if I am guessing right about which picture he means(it was the other astronaut who was the camerman).