The most boring stretch of highway is ...

This thread is about those seemingly endless stretches of highway that are devoid of any points of interest or even variation in scenery. These are roads that are mostly straight, don’t go through any towns, and offer nothing to see but the same numbing landscape for miles and miles. The type of highway where it takes great effort to resist the temptation of going more than 80 MPH. I want to read about your choices.

As thread starter, let me suggest the first monotonous stretch of highway: I-90 just to the west and east of Moses Lake, Washington. Once you climb out of the Columbia River Gorge, it’s just nothing but irrigated fields for miles.

I’d nominate the stretch of I-95 from Havre de Grace, MD to the Delaware state line.
About 20 miles of nothing.

Route 40 from Amarillo to Oaklahoma City. Just drove it today, and I’ve never seen a terrain so flat and treeless.

Seconded. I drove it in the middle of the night and I couldn’t even get radio reception for about a half-hour.

12 through Lolo Pass may be a lot of things, but I wouldn’t call it boring.

My vote is for I-40 from Santa Rosa, NM, through Tucumcari, to Amarillo

I-55, southern Mississippi into Louisiana. Straight, flat four-lane bordered on both sides by endless stands of pines. Worse, IMO, than driving through wide open flat.

Seconded. I drove it in the middle of the night and I couldn’t even get radio reception for about a half-hour.

Thirded. The stretch across Missouri’s not so hot, either, but the Kansas stretch is truly sleep-inducing.

I’ve never driven long distance away from the east coast so I would pick I-95 from Jacksonville to Savannah then Savannah to I-26(Charleston) – ~175 miles worth of gas stations, Cracker Barrels and marshes.

Route 40 from Amarillo to Oaklahoma City. Just drove it today, and I’ve never seen a terrain so flat and treeless.

Oh god, yes. I think the last remotely interesting thing to see on this drive is the freakishly huge cross somewhere in Texas. And I could live without seeing that… 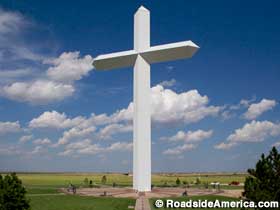 I-95 across the entire state of Connecticut.

The New Jersey Turnpike from about Exit 13 (which I think is Elizabeth…wherever the Ikea is) all the way to the Delaware bridge.

Thirded. The stretch across Missouri’s not so hot, either, but the Kansas stretch is truly sleep-inducing.

Fourthed, but I’m going to stand up for Missouri here. When I drove across on I-70 on my way from PA to CA I did at least get to stop at the Winston Churchill Museum, which was certainly a highlight of the trip (well, second to winning back all the costs of the trip in Vegas).

But I-70 through Kansas, wow. I was glad I’d brought an armload of CDs instead of hoping for the radio.

Interstate 40 from just before Needles, California, west to Barstow and then Highway 58 to Bakersfield.

Seconded. I enjoy long road trips when I get the chance, but that stretch of drive on the 40 made my one and only journey from LA to Laughlin fairly miserable. Not to mention it was really hot and Laughlin sucks out loud.

I have to disagree with this one. Sure, there’s “nothing” for about 400 miles, but it can be some really beautifulnothing…

70 between Indy and Columbus is enough to make one pray for the sweet release of death.

I65 from just south of Gary to Indianapolis. Mind-numbingly boring, with the exception of some pretty scenery around Layafette.

Whatever highway goes from Winslow, Arizona to the Meteor Crater. Literally nothing to see.

I have to disagree with this one. Sure, there’s “nothing” for about 400 miles, but it can be some really beautifulnothing…

I’m just guessing it was this highway - pretty damn boring, just scenery. But when we drove from Vegas to Flagstaff, I saw an unbelievable double (almost triple) rainbow.

If this is the same highway, then it gets a lifetime pass from me.

It’s been a long time since I’ve done it, but I’d vote for I-80 across Nebraska as a good second to I-70 across Kansas. And I think I’d rather go east than west on 70. At least going east you’re coming to something besides wide open flat plains.

The Eyre Highway that joins Western Australia to the rest of the country. Look around there are hundreds of miles of that.