All right. Seems as though this young woman was walking along Alexandra Road, at the corner of Abbey Road, when the iconic photograph of the back cover album was taken. All four Beatles gathered at EMI Studios on the morning of Friday 8 August 1969 for one of the most famous photo shoots of their career. Photographer Iain Macmillan took the iconic image that adorned their last-recorded album, Abbey Road. Here is a...

a) Did this young woman ever come forward later on?

b) What about the enigmatic ‘P’ that can be seen on her left thigh, fuelling the rumors of McCartney’s death at the time? Was this a photographic glitch, or was it intentionally placed there either by the photographer or someone in the Beatles’ entourage?

Where is she in the pictures you link to- I don’t see her.

I looked at my album first to make sure that my memory was correct as to what the back cover looked like. I did not find the back cover on the posted link. Google “back cover of the Abbey Road album” to find the picture. I do not see the “P”. I also do not know the answers to either question.

Well, back to work I go! 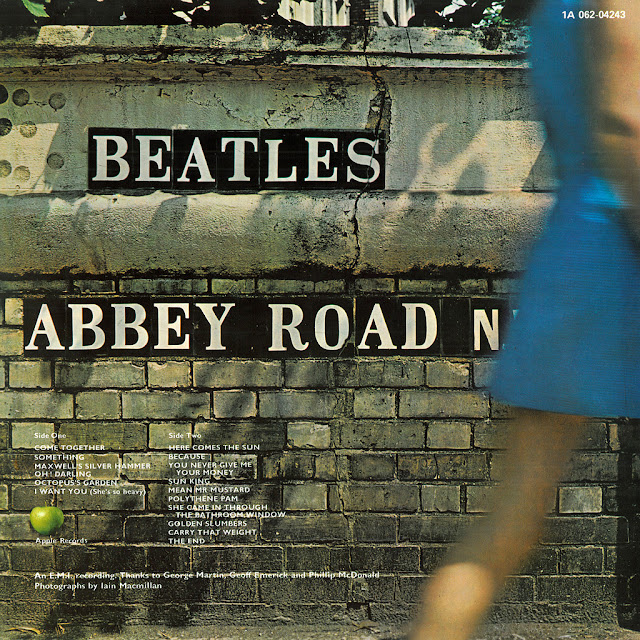 I presumed she was a professional model, despite never giving a moment’s thought to her identity before just now.

You’d think a professional model wouldn’t have pee on her thigh.

(The P in question is a faint, block-letter P just above and to the left of the light-colored brick. I’d say it’s just a combination of the lighting dapple and the multiple moire-ing of the printing and image scanning process. But then, I don’t never thought daed si lauP anyway.)

the girl in the blue dress was added with dark room trickery.
http://mikecockcroft.blogspot.com/p/john-cockcroft-retoucher-1934-2008.html

I have no idea if that’s true.

I have no idea if that’s true.

It does look like the bricks are bleeding into the leg. Moreso in the image from your link, though, than from Accidental Martyr’s link.

The photo has motion blur and could be a shot of someone just walking by. I can’t imagine how any woman would recognize herself from a butt shot in a blue dress.

If it was a model than I’m surprised she hasn’t come forward. Getting hired to pose for a Beatles cover would be memorable for any young model.

According to this site:
http://www.shootingfilm.net/2013/04/behind-scenes-of-iconic-abbey-road.html

After the road-crossing photo was finished, Iain Macmillan set off to find a good "Abbey Road" street marker sign to use for the back cover of the album. He found it at the junction of Alexandra Road and started taking photos of the sign. Much to his chagrin, while he was busy shooting an oblivious woman in a blue dress walked right in front of his viewfinder. While reviewing his shots later that day, however, he decided that the "blue dress" photo was the most interesting of the bunch, and he ended up using it in the final composition.

According to this site:
http://www.shootingfilm.net/2013/04/behind-scenes-of-iconic-abbey-road.html

Yep. That’s the link I was thinking of. Sorry about the erroneous one, although it does clarify the geographical location. As to the ‘P’ on the inner left thigh of the young woman, I distinctly remember seeing one at the time I purchased the original album in 1970. It is all but invisible in the photo links posted here.

Incidentally, I should mention that the ‘P’ in question looked, more than anything else, like a loose thread that could have come from the dress. Although, if I remember correctly, it was a slightly darker shade of blue… as if someone had wanted it to be noticed (so that it could have been added to the list of PID clues;-)).

While this is a factual topic, since it concerns the cover art on a music album it is more appropriate for CS.

You mean the girl in the blue dress wasn’t Lovely Rita, Meter Maid?

‘‘and on the back cover the signage " Beatles" and “Abbey Road” where created from shots of street lettering from in and around London, cracks drawn in to make it real and finally the girl in the blue dress was added with dark room trickery.’’

If that’s true, it’s fascinating. I always thought the young woman just happened to pass through when the photo was taken, as a few other sites had noted.

And this quote would also answer a few other questions I had with the signage. Thanks bibliophage!