Identifying mysterious character in photo of the Beatles, Donovan, Mia Farrow with the Maharishi

Question relating to the photo you can see here.

I scanned in a photo from a double CD collection I have of Donovan’s songs (Troubadour - I have the “long box with the picture booklet” mentioned in the Wikipedia article). In the photo, you can see Scottish singer Donovan, three of the Beatles (John, Paul and George), Mia Farrow, and the Maharishi Mahesh Yogi. I am assuming this picture was taken during the 1968 visit of the Beatles to India.

You might not be able to tell, but there was someone in the photo, between Donovan and Mia Farrow, and that person has been airbrushed out. I know this for sure because I saw the same photo in a magazine once and there was a person there. The unretouched photo was in Time or Newsweek between approximately 10 and 5 years ago. I saved the magazine, but my wife later threw it away by mistake.

Questions:
Has anyone seen an unretouched version of the photo? If you can find a copy online that would be great.
Who is the missing person, and why would they be airbrushed out? Maybe someone that Donovan didn’t like?

From what I remember of the picture I saw in Time or Newsweek, the person was a man, thin, blond, had a small beard (maybe a goatee). But my memory could be faulty.

the person was a man, thin, blond, had a small beard (maybe a goatee).

He certainly qualifies as someone you’d want to airbrush out of a photo!

I love the BB’s music, but Love has the rep of being a real dick…and litigious, I think, too - so maybe that influenced things…

Mike Love at least was there. Another Beach Boy reportedly made the trip as well.

If this is the same photo you posted from Flickr, Lute, I apologize, but Flickr’s blocked here so I can’t see.

If this is the same photo you posted from Flickr, Lute, I apologize

Thanks a lot guys!
First of all, it looks like this photo is of the same photo session as the colour photo that Lute Skywatcher posted in his second link (colour group photo, flickr.com) - the same people are holding flowers as in the photo I have, they are wearing the same clothes, etc. So you would think that it’s a person seen in the colour photo.

Secondly, WordMan would have an explanation of why Mike Love would be airbrushed out.

It could be, but in my (probably faulty) memory, the person was thinner than the Mike Love seen in Lute Skywatcher’s colour photo, and had a much smaller beard, not much of a beard at all really. In my photo I am sure the person was not wearing a hat. It could be Mike Love, but my first reaction would be that it was someone different. I wish I could find the photo I scanned but with the “missing person” showing.

In Donovan’s autobiography, he writes that the group that went to India included Mal Evans, the Beatles road manager, and Donovan’s best friend “Gyp.”

Gyp had a goatee during the India trip, too (top right). Mike Love had a full beard (third from right).

I can easily see him being airbrushed out to leave nothing but famous faces.

Or maybe the beard explains why Prudence wouldn’t come out to play.

From the much maligned Phillip Norman book SHOUT The Beatles in Their Generation:

I couldn’t get a better scan; it’s a fairly thick book, and the (printed) photo itself looked to be of lesser quality than Arnold’s sample.

And of course the person isn’t identified (only Mia and Donovan are named in the caption.) but they haven’t got a beard, though the way the shadows fall one could be fooled into thinking so.

And this, ladies and gentlemen, is why I love this board.

“Hey, this photo I have taken in the late sixties is missing someone”

“Oh that old photo? I have a copy of it right here in this book. Let me scan it for you a mere 3 hours and 16 minutes after your obscure request”

I was going to guess Lavrenti Beria.

In “The Beatles Anthology” (p, 286) there is a similar group photo (slightly different mix of people) with the same fellow. Unfortunately, there is no caption identifying anyone in it.

In the text, there is mention of Neil Aspinall, Denis O’Dell, and Derek Taylor. It’s clearly not Aspinall or O’Dell. It doesn’t really look like this photo of Taylor, but I see a bit of resemblance with this one and even more with this one. So maybe it’s Derek Taylor?

There is a second, full colour, photo from the same session in Roy Carr’s The Beatles: An Illustrated Record (2nd edition, pg 72). Mike Love is in that photo wearing a white bucket hat, with full beard and mustache. The unidentified person from Arnold Winkelried’s photo is stood in the back between Mia Farrow and Donovan (whose positions in this other photo are Mia to the right of Donovan).

Here is a reversed version photo from Carr’s book, from a website 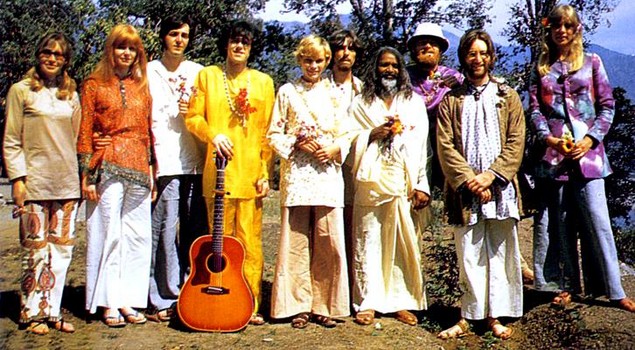 The mystery guy has been airbrushed out of this one, too; he should be in the back between Paul McCartney and George Harrison.

There is a book called The Beatles in Rishikesh (Paul Salztman) which I don’t own, but perhaps if you track that down, it may note who he is – he must be someone relevant, as he appears in photos with the Beatles and their celebrity friends. I thought perhaps he might be Paul’s brother Mike McGear, but the shape of his face is wrong.

Saltzman was a professional photographer who documented the Beatles’ trip to India, so you might get your answers from his book.

Another possibility – it could also be a clean-shaven Magic Alex 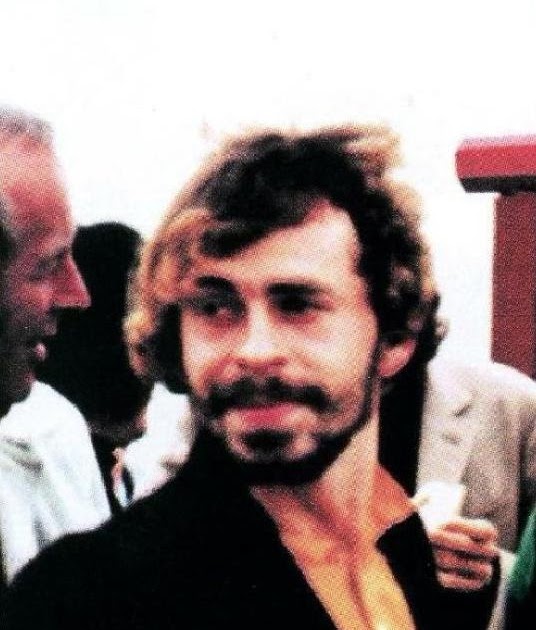 The Many Faces of “Magic” Alex Mardas

Lennon was to have many gurus over the space of his ten years in the Beatles, but none was to cause him such acute future embarrassment as o...

and I wouldn’t imagine there would be any arguments from the Beatles at having him erased from their photos.

Sorry for the double post – the colour photo I linked to is the same as Lute Skywatcher’s, but here is a crap photo of a photo of the original from Carr’s book 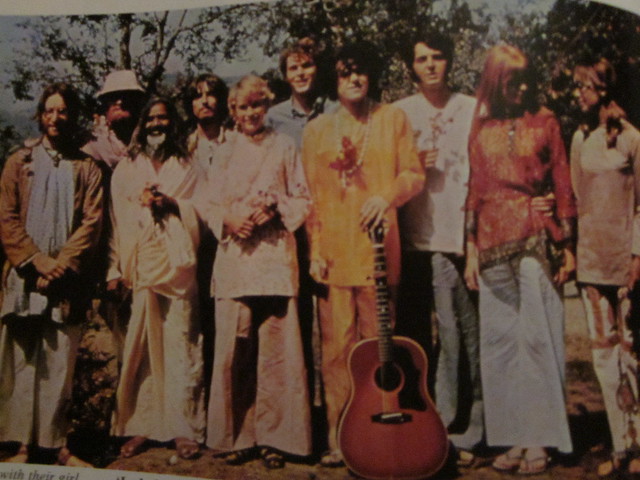 The unidentified person from Arnold Winkelried’s photo is stood in the back between Mia Farrow and Donovan (whose positions in this other photo are Mia to the right of Donovan).

Sorry for the double post – the colour photo I linked to is the same as Lute Skywatcher’s, but here is a crap photo of a photo of the original from Carr’s book

Our man is in this photo, to Mia’s left (our right).

:smack: Please disregard the comment about George, just realized you weren’t referring to the reversed photo.