Go to this MSNBC page and launch the “Emotional Moments” slideshow about halfway down the page on the left - It’s the 6th picture.

Worth a look - Trust me!

Sure, it looks stupid on a picture but I, for one, think the* haka* is wicked awesome. Are you mocking the ancient NZ traditions?

If you think it’s strange that the Tall Blacks do it, it really looks strange when the national cricket side does it!

Sure, it looks stupid on a picture but I, for one, think the* haka* is wicked awesome. Are you mocking the ancient NZ traditions?

I said it’s different. The picture speaks for itself quite eloquently.

Not a patch on Carlos Spencer and his tattoos.

The bloke in the back with the black shoes seems to be making his own haka up.

You have, I take it, never seen the New Zealand soccer team: 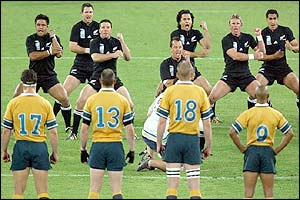 Or the New Zealand military:
http://www.mft.govt.nz/foreign/regions/mideast/usnzhandover/haka.jpg

Or New Zealanders in general:
http://gbartfai.port5.com/new_zealand/Haka.jpg

Just out of curiosity, do many Maoris have a problem with sports teams, especially those mostly made up of a bunch of white guys, performing the haka? I think it’s a really cool tradition, but I always imagine some Maori sitting in front of his television cursing the bastards who are using his cultural tradition to intimidate a bunch of gawky basketball players.

You have, I take it, never seen the New Zealand soccer team:

Or the New Zealand military:
http://www.mft.govt.nz/foreign/regions/mideast/usnzhandover/haka.jpg

Or New Zealanders in general:
http://gbartfai.port5.com/new_zealand/Haka.jpg

Well… at least we’ve answered the burning question of what the New Zealand way is all about.

The saddest part was losing to Italy by 2 points after coming back from 17 down in the first half.

The All Blacks set the standard. It’s not quite the same when the gangly white guys do it

And C3, there are some Maori that get steamed over it (like every ethnic group in the world), but the majority is ok with it as long as it’s not done by females.

Besides, it’s basically a small yarn about some bloke praising a hairy cheif for hiding him in a sweet-potato pit with his wife on top.

Thanks for the link in your OP, astro. Very cool shot.

NZ only does the Haka to frighten Aussies. It doesn’t work as often as planned

Um. I guess the link has changed. I see the Iranian soccer team.

Um. I guess the link has changed. I see the Iranian soccer team.

Once the slideshow is running click on “archive” in the bottom right hand corner and choose August 15th. It’s the 6th pic.

Dude! The Italian team got served!

NZ only does the Haka to frighten Aussies. It doesn’t work as often as planned

The Haka is very cool.

I remember a few years ago (forgot when exactly, and even what sport), the Australian team decided in advance to turn their backs on the Kiwis as they performed the Haka. I was quite ashamed about that, and even more ashamed at the way the Australian press seemed to condone this behaviour. There is an element of respect in being the recipient of a Haka. That was lost on them. Thankfully, I think it only happened once. Somebody might have had a quiet word.

If, like me, you’ve come across this thread and want to see what the heck the haka is, you need to go to the site linked in the OP, click on the Emotional Moments link, let it load, click on the Archive spot down in the lower right, click on August 15, wait for the OFOTO logo to finish loading, and then select picture #6.

Is there a traditional response to a Haka?

I’ve never had the opportunity to see video of this taking place, but in all still shots I’ve seen the opposing team simply stands and watches. I’m guessing that any other response/counter-dance would be considered, at best, very rude? (e.g. turning one’s back, as TheLoadedDog relates.)

You can see the Haka here. http://www.nzrugby.com/history/history_haka.asp

When we play Pacific Island nations like Tonga, Samoa and Fiji they perform their own wardance at the same time. When we play other countries they usually just link arms and watch.

It can be fun to see the expressions on the faces of those countries we don’t play often.

From: Copur San Juan
To: Coach J Toro
Instruct Team Must Not Repeat Not Follow Thru Plan Do Macarena In Response To Nz Haka Stop Xplanation To Come Stop Fiba Says No Go Either On Plan For J Ortiz To Do Version Of She Bangs Stop
End

Actually, I’d love to see the Wallabies do th’ Macarena in response to the All Blacks’ haka. Definitely a replay moment there!