Things that are on the internet... just barely

I was thinking about a patch that was quite ubiquitous when I was in grade school and Jr High. A ‘Survival’ patch. Thought I would see how popular they still were. Well, not only could I not find any for sale, it took a bit of searching to find this one image.

Weird (to me anyway) because these used to be on just about every hippie’s jeans and backpack. 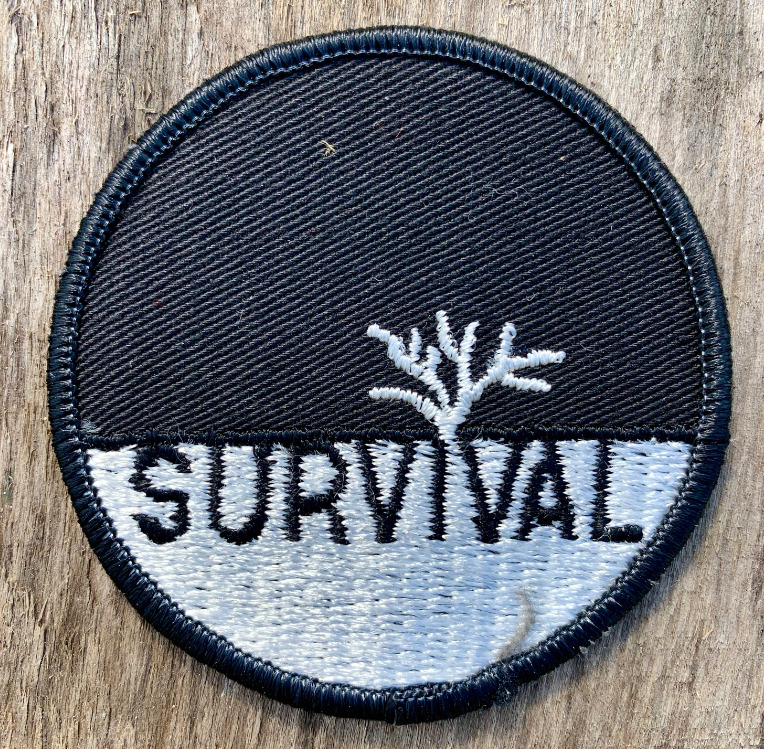 The Mom & Pop Italian joints around here all have a house dressing that I absolutely love. It’s like a tomato basil vinaigrette.

but I can’t find the recipe the M&P shops are using around here.

I’m thinking you just can’t find the specific strain of tomato or basil or the correct brand of vinegar. Restaurants are tricky like that.

My dead-tree geology book has a picture of turquoise that is a random pattern of splotches of bright white and turquoise.

Last summer, my niece did “gemstone mining” at Breckenridge Fun Park, and one of the gems she “found” looked exactly like the picture in my geology book. I was pretty sure it was turquoise, because how many other gemstones are turquoise-colored? But none of the images I could find on my smartphone looked anything like what I remembered, to the extent that I questioned my memory.

When I got back home and opened up my book, there it was, just like I remembered. And no matter how I refine my search, either the pattern of white and turquoise or the brightness or sheen is completely off. Even when I look for “raw” or “rough” turquoise, still no dice.

The closest I can get is the right side of the upper right stone in this picture on WIkipedia, and even then, the white is not as white nor as reflective as the picture. But that could be an artifact of the lighting in the picture and when I saw it in person, and the pattern is spot on.

Because of my interest in medical history, I frequently enter the names of no-longer-marketed drugs into Google, and maaaaybe get results 1 time in 10. It’s actually surprising how hard information like that is to obtain! Newspapers.com is a little bit better, because the drug names may be in archived articles, or ads if they are OTC products.

Copies of out of print books. The typical dusty used bookstore doesn’t have time to enter inventory online.

Abebooks is the only source I’ve found and they tend to be pricey.

Discover a wonderful selection of rare and collectible books, used copies, signed and first editions and more, from booksellers located around the world.

Otherwise you take your chances on ebay. You may find a bargin price.

Amazon often has that one copy for 999.99. Hoping someone is stupid enough to bite.

I’ve got a pair of very rare limited edition retro reproduction tribute skis from a Swiss company. I wanted to do some research on them and only managed to find about 2 photos and a scan of an ad from a magazine. Nothin’ else.

Damn little on the net about the ground-breaking Astraltune. But I guess that’s more than enough…

I was thinking about a patch that was quite ubiquitous when I was in grade school and Jr High. A ‘Survival’ patch. Thought I would see how popular they still were. Well, not only could I not find any for sale, it took a bit of searching to find this one image.

Weird (to me anyway) because these used to be on just about every hippie’s jeans and backpack.

I don’t recall your exact age but IIRC it’s close to mine (64). I grew up in SoCal and have never in my life seen or heard of that patch. It may well have been ubiquitous where / when you were, but not where / when I was. Not that I hold myself out as any sort of standard, but sometimes we each assume things from our youth were far more universal than they really were. An understandable consequence of our necessarily limited experience of the entire world of time and space.

The Mom & Pop Italian joints around here all have a house dressing that I absolutely love. It’s like a tomato basil vinaigrette.

Perhaps “White Water Turquoise” is what you are looking for…do a search for the raw ones and see if some of those match closer to what you have.

Copies of out of print books.

It covers Abebooks, Amazon, eBay and lots of other bookselling sites.

If you want really old books you can download lots from:

But I think the really big problem is the inadequacy of search tools such as Google, not what the OP suggests.

I don’t recall your exact age but IIRC it’s close to mine (64). I grew up in SoCal and have never in my life seen or heard of that patch.

I remember it. I’m about the age of you folks, and I remember it from the ads in comic books of that era (late '60s, early ‘70s). It, and American flag patches where the star field was replaced by a Peace or Ecology sign, and “War is not healthy for children and other living things” patches, and "Keep on Truckin’" patches, and so many more, were offered. "The “Survival” patch, as depicted in the OP, existed, as I remember those long-ago comic book ads; though it may not have been very popular.

Me, with my real name. I have been able to find.
Linkedin.
Facebook, but with a fictitious picture, city, etc.
A “hall of fame” on an obscure website because i found something hard to find.

The entire US banking system. Oh, sure, it looks like we have online banking… except that most of that “online banking” still consists of pieces of paper being printed out, physically moved from one office to another by people, and then scanned back in. They’re only just now starting to use actual electronic methods (and incidentally, implementing actual security for the first time in history).

A high school friend of mine was murdered by his girlfriend a few years after we graduated, then killed herself. This was in 1982. I heard about it through the alumni grapevine. For years I’ve tried to find a news article with details, without success. I finally found one article about it from the San Francisco Examiner, available only at the pay site newspapers.com.

In the late 00s, when I was living in my old town, which was in a rural area, a family, which consisted of an elementary school principal and her husband, and their two young children, drowned in a freak van accident. That accident, and pretty much any proof of their existence, was basically wiped from the Internet after the autopsy results came back and the parents BOTH had astronomical BAC levels, as in 0.2 or higher.

I don’t recall your exact age but IIRC it’s close to mine (64). I grew up in SoCal and have never in my life seen or heard of that patch.

I do live in California… now, but I grew up in Texas (I’m 67). I remember it being pretty popular, maybe because I wanted one and my parents wouldn’t let me have one. They assumed it was only worn by ‘people who smoke mushrooms’. It’s funny, I didn’t experiment with cigarettes, drugs or alcohol back then but my mom had this dread fear that I was going to be experimenting with mushrooms! WTF!

Anyway, yeah, I saw it along with the “War is not healthy for children and other living things” and “Keep on Truckin’” patches. Assorted versions of the peace sign as well.

The Solution For The Twilight Zone Interactive Fiction PC Game

The game can be played and downloaded at a plethora of sites. After years of playing it, I suspected a bug was preventing my progress. So, I looked for walkthroughs. Half the sites have a file for an unrelated edutainment game called Time Zone. The rest have nothing. I eventually found a walkthrough in a PDF archive of a PC gaming magazine. It seems to confirm that a glitch prevents my progress. Sigh.