Ok. It will be a miracle if I can post this coherently…

My house has a hip roof, so it slopes up on all 4 sides. The main part of the attic is a finished room. So this creates sort of a cube inside a pyramid. There is access to the eaves and one can walk all the way around the outside of the cube, being inside of the pyramid.

For 80 years the eaves have been dead and filthy space. But there’s lots of room for storage in there. I’ve cleaned it all up (seriously, I didn’t know dust and cobwebs could get that thick), removed all the dead mice, and I’m putting in some shelving and the like.

The room is insulated with fiberglass batts, but the inside of the roof, or the pyramid, is not. Just the sheathing and then the shingles. Thus the eaves get insanely hot in the summer and cold in the winter. The room stays warm in the winter, but currently has no A/C and so in the summer is pretty hot.

I’ll be putting in some split systems and I will certainly put one in the attic room. What I’m wondering is if I am better off to leave the eaves space as-is (not insulated) or insulate under the roof. I think I would leave the insulation on the room walls and add to the underside of the roof, but I suppose I could remove the room insulation.

The goal is mainly to reduce temps in the eaves in the summer, as 120-130F limits what I can store in there.

Any thoughts on the best way to insulate the space? One idea was to remove the room insulation, insulate under the roof, and then the split in the room would help moderate the temps in the eaves… But I don’t know

They taught me in college that laying fiberglass batts in joists will cause moisture problems, you will have condensate that makes the batts and roof wet. Can you erect a ceiling below the roof for insulation?

One thing that’s commonly done under the roof is to install a radiant barrier. There are two basic types: a reflective foil or a spray-in foam. They’re not exactly insulation. Rather, they block the light energy from heat from passing into the attic space. The spray-in foam will offer some insulation, but the main benefit is blocking the radiant heat. The difference in your attic will be like the difference between leaving your car in the hot sun versus parking it under the shade. It will be hot in either case, but under the shade it will be much cooler. The net effect will be that the AC in your attic room won’t need to work nearly as hard since it won’t be trying to deal with the radiant heat from the roof. If you’re handy, you can install the radiant foil yourself. It’s like tacking up a plastic aluminum foil. The spray-on should probably be done by a pro.

Ok. It will be a miracle if I can post this coherently…
(…)
Thoughts?

Your description was wonderfully clear. I don’t know what a split system is, but then I’m not informed enough to offer valid advice, so I’m not really your target audience. But a good read.

I don’t know what a split system is,

It’s a form of air conditioning (heat-pump, really). There’s an outside component that feeds air-handlers in each room needed: 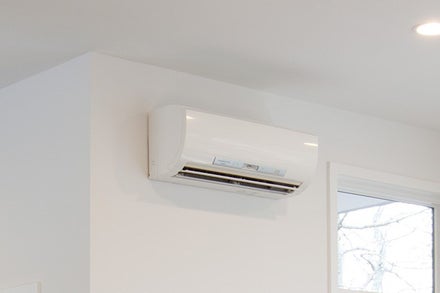 Everything we know about ductless mini-split heating and cooling systems after interviewing installers, manufacturers, and homeowners with systems of their own.

Ideally you’d spray foam the rafters. That’s the only way code generally allows full-depth insulation without venting underneath the roof sheathing. Normally you’d need to leave a 2" gap above the insulation and below the sheathing, with vents in the soffits and another vent at the ridge. Trouble is spray foam is quite pricey, but nothing beats it for a good air seal. Drafts are enemy #1 and spray foam fills all those potential gaps. The other problem is that most building codes require spray foam to be covered with a flame barrier. This would mean drywall, which adds even more expense.

In general, it’s not good practice to create cavity spaces between different insulation systems. The worst is within a wall where you could have a vapor barrier on both sides, trapping moisture in between (this can happen with vapor-impermeable paint on the outside wall and on the inside, for example). The OP’s situation is different, but insulating the rafters and leaving the insulation around the room as well could lead to some unforeseen consequences, but it also depends on the type of insulation being used, so there’s not one true answer.

Radiant barriers only seem to be effective in really hot climates, and they negate the benefits of solar gain in winter. I’ve never used them in Cincinnati or Chicago. Same for thermal mass, except in a few specific circumstances they’re a desert typology that doesn’t work in isolation in more temperate climates. Flash and batt, which is a thin layer of closed-cell spray foam (up to 1" thick) with the rest of the insulation coming from conventional fiberglass, cellulose, or rock wool is also problematic in how it manages moisture migration and its air seal is questionable at such a thin layer. I have however done 2-3" of closed-cell foam (gaining a significant insulation value from that alone) plus more fiberglass to make up the rest.

Closed-cell foam is denser and has the highest R-value per inch (about 7 compared to nearly every other type of insulation which is closer to 3 or 3.5). Of course it’s more expensive. It’s what they make rigid foam boards out of, and Great Stuff foam in a can. There’s also open-cell foam which is cheaper but you need more depth to achieve the R-values. It has the consistency of angel food cake and still provides for a good air seal while also being more vapor permeable.

Depending on your budget, you might consider aerogel insulation. It has a crazy-high R value.