I can assure you Florida Highway Patrol has an active policy to cite drivers who warn others of police radar. I just go popped earlier this month. The officer did not know that I had the entire incident recorded (video and audio). A link to the stop is here: 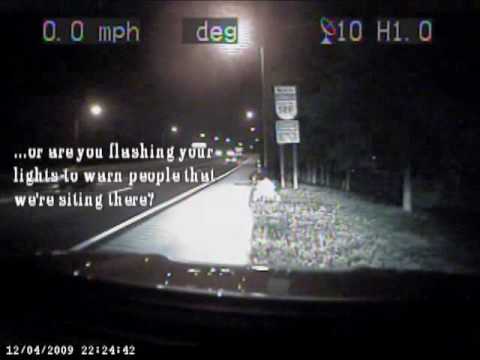 For those that think officers don’t have the time or motivation to go after petty ‘crimes’ like this, let me remind you - the two FHP cruisers in this stop did over 102 MPH to catch me within 1 minute of me turning my headlights on and off.

There are many pro-law websites where LEO really talks nasty about the practice “I’d have them arrested for obstruction. The charge won’t stick, but they’ll get a free ride”… or “it’s a gift that keeps on giving” referencing the insurance rate increase.

They take it very personally - that it’s disrespectful. They then have a score to settle. One even states with pride “I’ve let speeders go to get the punk that’s warning people”… fellow posts agree.

That being said, in my video, I 'm accused of IMPROPER USE OF HIGH-BEAMS. The trooper refused to listen to my explanation (bogus or not), and insisted I used my brights. When I tried to show the difference in intensity between off/on and on/brights, he got even more offended.

The points all of you have made regarding speech issues, I think, are the most legitimate. The statute with which I was cited 316.2397.7 forbids the use of ‘flashing lights’ on normal vehicles. Just as in the Kirtland Hills case cited above, the term “flashing lights” refers to a type of light - not the act of “flashing one’s lights”.

The trooper is trying to prevent others from communicating. That’s a no-no. Court date has not been assigned yet.

I have submitted this to the ACLU under free speech infringement - though I’ve heard nothing back. Also, you may notice that when I asked the Trooper “What is illegal with warning other motorists” he did not answer the question. Quick answer: It isn’t.

Has anyone else been ticketed for warning other motorists? Did you challenge it?

I don’t see a debate here, erkme73, and please don’t use this site to draw attention to your personal cause. If you would like to discuss whether or not drivers should be allowed to warn each other about police radar and such, please start a separate thread about that.