Signed on with the Jacksonville Jaguars. No doubt there is some PR aspect to the signing (he already has the #1 selling jersey in the NFL online shop). But the question is does he also have a legitimate shot, or is it pure marketing?

I think his signing has more to do with Urban Meyer seeing him as “a son,” but who knows how the final decision came down.

The video of him as a receiver (running the route poorly, ball bouncing off his helmet) is pretty representative of the success I anticipate him having.

He will sell merchandise as well as pre season tickets and that’s it. Cut before the regular season begins

His chance of being a legitimately productive NFL tight end is probably better than 0%, but not a lot better.

I agree with what the others have said. Mostly just a publicity stunt to allow Tebow to get is name out in the sports world again. He will sell jerseys since it is Floriduh. And after all is said and done, Meyer may hire him as some assistant to get him some coaching experience.

He’ll probably be running for office in a couple of years, most likely in Florida.

He should have been a tight end after being drafted. It’s years too late for this.

It will generate publicity and money so it’s a good move by Jacksonville, but I would be shocked if he makes the roster.

He’s also on the smallish side; 6’3" and 245 is both short and light for the position. Keep in mind that the tight end is basically a smallish offensive tackle who sometimes runs pass routes, and sometimes does blocking just like an offensive lineman, including blocking down on defensive ends and linebackers. Gronk is something like 6’6/265, Travis Kelce is 6’5"/260, George Kittle is 6’4"/250, and so on- 6’5/255 is probably a good middle of the road sized tight end, and Tebow is a couple of inches shorter and ten pounds lighter than that.

Unless he’s very fast and can catch extremely well, he’s not going to be terribly successful as a 33 year old tight end who’s on the small side. If he was really big, then maybe- he’d at least be able to block effectively on run plays.

Good point – based just on his size, he might be better suited for being a big WR than an undersized TE.

But a WR needs to have excellent speed and/or excellent route-running, along with great hands, in order to excel. He ran a 4.72 40 at the combine in 2010, and he’s likely not any faster than that now (and quite likely a bit slower). And, as already noted, he is not an experiened route-runner, nor an experienced receiver.

Every team needs an outfielder, right?

Every team needs an outfielder, right? -

He’d do better at goalie.

Can anyone confirm this? I heard on a talk show that he needs 3 games to qualify for full pension.

I have a confession to make: I thought Urban Meyer was a good hire for JAX. I’m second guessing that thought…like majorly.

Meyer is a decent guy. He’s a great college coach. A natural progression for him might have been becoming an athletic director a la Mike Belotti at Oregon and Skip Bertman at LSU. But I think he’s going to flame out as an NFL coach. He’s just completely tone-deaf to what people at the next level are thinking and feeling. I thought Chip Kelly was a risky NFL hire. Meyer might be worse.

Meyer is a decent guy.

Take a deep breath, everyone. We'll get through this shocking revelation, this can't-be-true moment, together. Urban Meyer has retired . Again...

I agree that if you’re going to put Tebow anywhere on offense, an extra wideout makes more sense than TE. The thing is, TE is a complex position. You don’t just catch balls; you’ve got other responsibilities. If the NFL were still a full-back league, I’d argue maybe putting him in as a trickeration type back who could occasionally run for 10 yards and throw a 40 yard TD. But putting him at TE now just seems like a circus act, and it really hurts Meyer’s credibility. And that’s disappointing b/c I was a fan of his college level coaching.

I said he was decent; I didn’t say he was squeaky clean.

But I think he’s going to flame out as an NFL coach. He’s just completely tone-deaf to what people at the next level are thinking and feeling. I thought Chip Kelly was a risky NFL hire. Meyer might be worse.

Honestly, most really successful college coaches in the past 30-plus years who have tried to move to the NFL haven’t been successful, and most of them have wound up quickly going back to the college ranks. Spurrier, Saban, Petrino, Kiffin, among others, found out that coaching in the NFL is very different.

In college, a head coach is effectively a coach/GM, and a successful one is pretty much the absolute ruler of his program. You’re coaching a bunch of guys in their late teens and early 20s, who see you as a father figure. In the NFL, you’re almost undoubtedly dealing with a GM, who probably hired you, and who has a lot more control over team decisions. And, you’re coaching players who are probably making more money than you do, and are a lot more independent-thinking.

Long way of saying that Meyer would have probably been smart to stay in the college ranks, or on TV. He’s now helming a team with a history of losing, and an owner who may be considering trying to move the team.

So when they move to London, will they be called the Jag-You-Awrs?

His weight is fine, and his height is below the median, but not ridiculous. That said, as everyone has pointed out he is 33, and as far as I know he has never had to do any blocking on an end-run or choose in an instant between blocking two different end rushers.

I truly do not understand the fascination with Tim Tebow, but based on the jersey sales mentioned above, a lot of people love him. 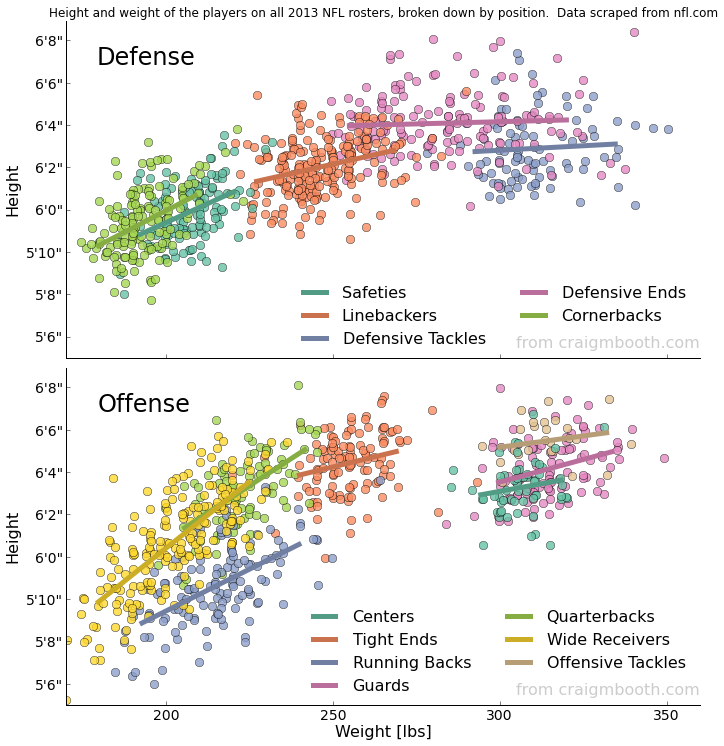 I truly do not understand the fascination with Tim Tebow, but based on the jersey sales mentioned above, a lot of people love him.

I think that this is the core of it. Tebow has an exceptionally fervent fan base (with a high degree of overlap among Evangelical Christians), and so, he has always been a PR generator, as well as a vehicle for selling merchandise.