Where do you live? In ND I have seen them nesting in the summer, but they get wild in August. Once we were eating a pizza outside and one landed on the pizza and buzzed of carrying a good sized piece of sausage.

A few years ago I had my dog out to a river area we used to hit regularly (sadly he died last fall) and saw a huge number of crows mobbing a great horned owl, This went on for a long time, the owl would fly to distant trees, the crows would swoop over there. I was not familiar with this but found stuff on google about it when I got home.

Today in my husband’s shoe I saw nature. 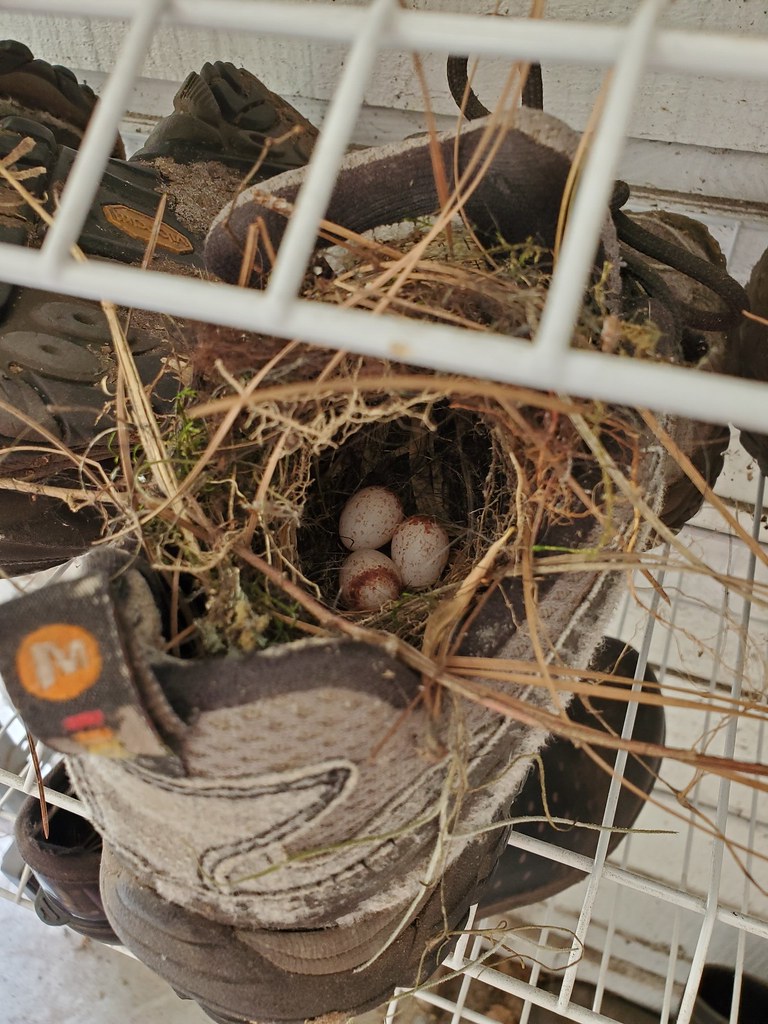 Possibly. They’re slightly pink eggs with dark blotches on them. I’ll have to watch for their mother.

Note the shoe on this Carolina wren page

. Almost certainly wrens, but could be a house wren. But spotting and placement looks more like the Carolina wren.

I was just out shooting marsh wrens (among other stuff) the other day: 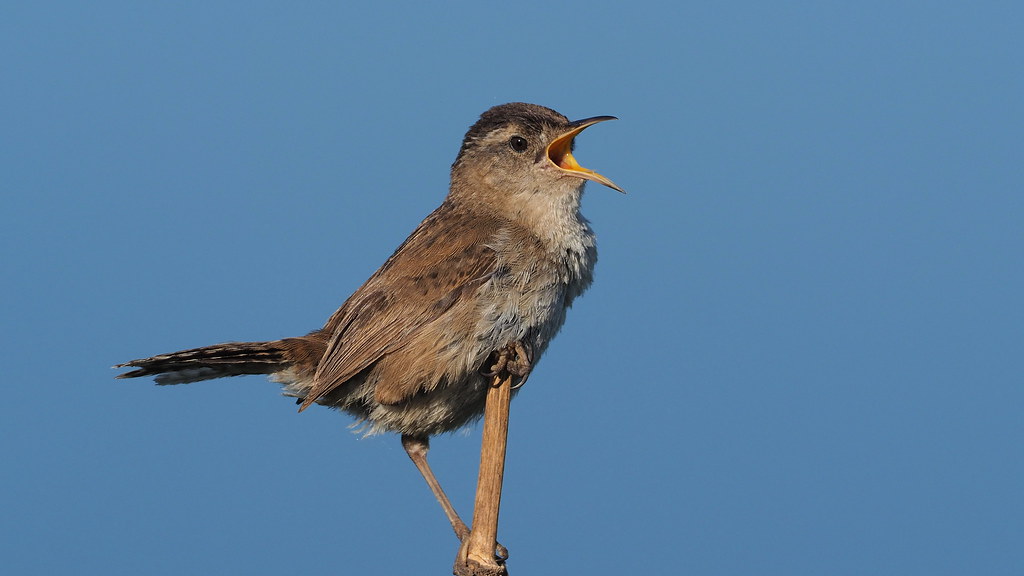 Yep, I bet that’s it. We see a lot of wee little birds going in and out of the garage (we leave it open when we’re home).

Minneapolis St Paul metro. I live in a condo and the caretaker spends a good part of his summer hunting down and removing starter hives. I spoke to him about attracting bumblebees to cut down on our yellow jacket numbers but the HOA is against it all (because they know little about bees and apparently don’t want to learn).

Today I saw a bald eagle. I thought that I must be wrong but I found someone’s pictures online tonight and we have at least one nesting pair in town.

We have to watch our garage closely, otherwise wrens nest and we then have to leave it open.

Mom was home this morning…looks like @kayaker was right! 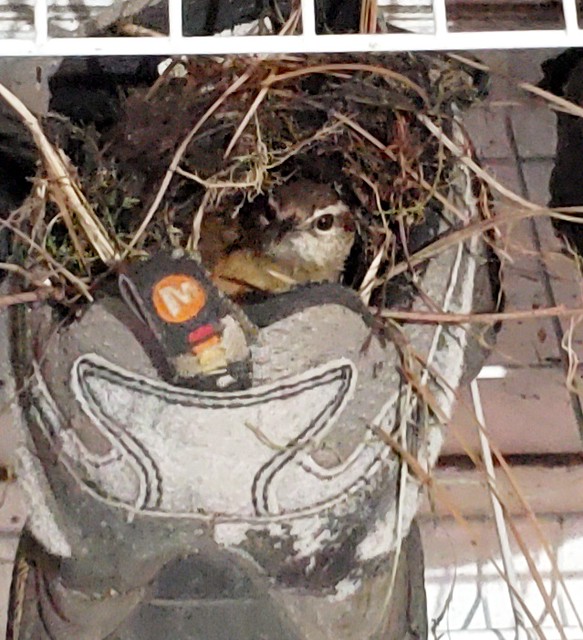 Yesterday in nature, I watched a starling hunt down a worm/caterpillar thing, then fly up into a hollow knot of a nearby skinny little tree, barely bigger than a sapling … that promptly started emitting cheeping noises.

Starling disappeared briefly into the noisy hole, then flew off like a bat out of hell. (Cheeping in hole reached crescendo.) Off to find the next worm/caterpillar thingie, or perhaps just to get away from the pandemonium.

(Starlings are notorious, invasive birds that kick other birds out of established nesting holes - I’ve personally witnessed this, it’s heartbreaking - and are responsible for declining native bird populations from bluebirds to woodpeckers.

That said, they’re entertaining as hell to observe.) The common starling or European starling (Sturnus vulgaris), also known simply as the starling in Great Britain and Ireland, is a medium-sized passerine bird in the starling family, Sturnidae. It is about 20 cm (8 in) long and has glossy black plumage with a metallic sheen, which is speckled with white at some times of year. The legs are pink and the bill is black in winter and yellow in summer; young birds have browner plumage than the adults. It is a noisy bird, especially in communal roost...

Yesterday I saw what from a distance looked like a pair of goslings chasing each other down a path, but as I got closer, realized they were actually baby roadrunners. They were surprisingly quick, but eventually I got ahead of them and tried to get them to turn back, as they were likely running away from their nest and were exposed to predators. They hopped into the bushes before I could get a pic, and I felt that at least they were hidden from hawks and so forth. It was really cool, and of course, I thought of this thread, which I had seen but never had a reason to add to until this unusual (to me) sight.

Fruit trees have been blooming since Saturday and today I saw two bumblebees giving them a workover. And the daffodil plants that suddenly appeared amongst the rocks surrounding my condo (surprise!

) are about to bloom.

We have hawk wars here. There is a hawk pair that have a nest somewhere down our street - not sure exactly where, but I see them hanging out together in a tree several houses over from where I live. Today we were out in the yard and heard them screaming - at another hawk pair that was screaming back. Not sure if this was an invading pair or grown babies and parents squalling back and forth, but I’d guess the former.

My sweet dog killed a chipmunk. I wasn’t happy, but recognize that it’s her instinct.

Orioles are back in western Pennsylvania (Baltimore orioles). I began putting out oranges the other day. They ate heartily today.

Yesterday I saw what from a distance looked like a pair of goslings chasing each other down a path, but as I got closer, realized they were actually baby roadrunners.

One of the predators I feared would get them was in fact a coyote.

One of the predators I feared would get them was in fact a coyote.

Just be sure not to leave an Acme catalog lying around where a coyote can find it.