The message board doesn’t allow me to embed the photo like I could previously, but please click the link above.

I was sitting on the porch the other day and hummingbirds began pestering me. They fed from some hanging baskets and then flew up and got in my face! 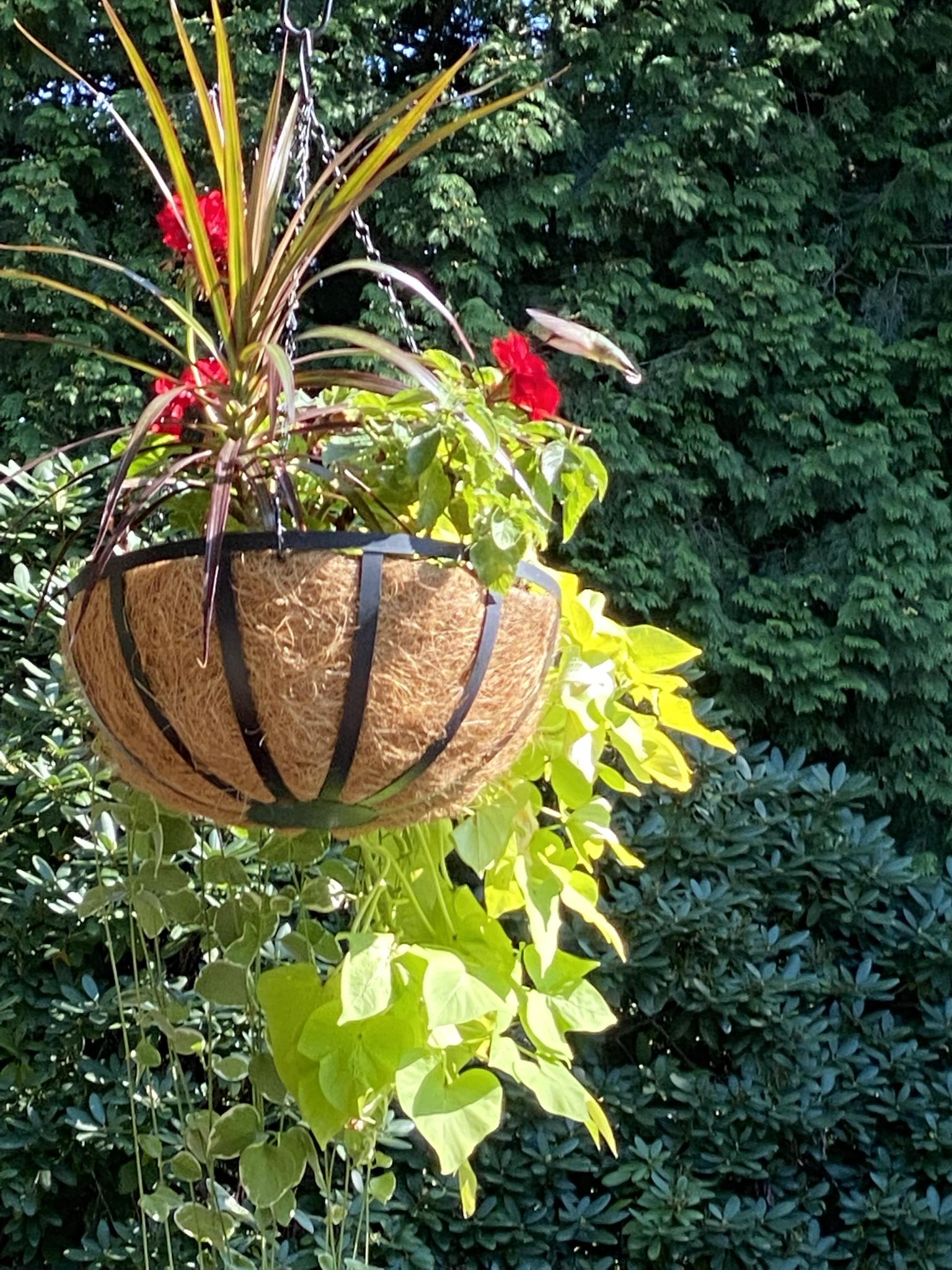 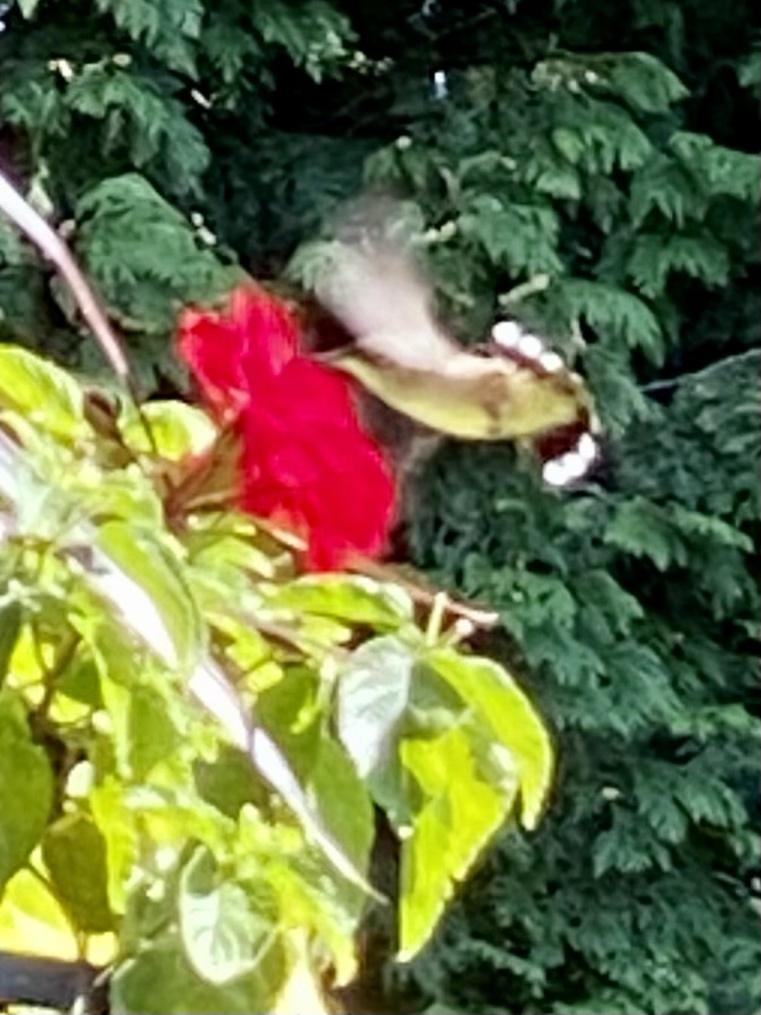 I mentioned this behavior to my gf. She ran off and refilled the feeders. Apparently they’ve done this before when the feeders run dry.

Yeah - those suckers can really make their feelings known.

Today I saw a bear pooping … in a cemetery. Sorry for the crappy pic, but I was fairly far away and intended to stay there, as this was a mama bear who had a baby with her. My husband was farther down the hill and to the right when he turned around and saw mama about 12 feet away from him - fortunately she headed in the opposite direction. 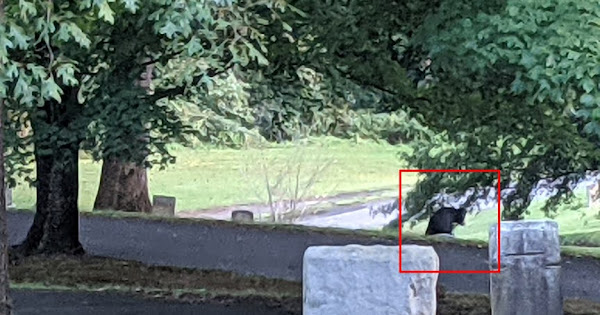 Today I saw a bear pooping … in a cemetery.

I think you won the thread!

We went there to see Tom Wolfe’s and O. Henry’s grave sites - bears were just about the last thing I expected!

Today I saw a bear pooping … in a cemetery.

Was it on the grave of a hunter?

Some say in Nature I saw…

I’ve taken so many thousands of photos over so many years that I don’t even know everything that I have anymore. Going through an old “miscellaneous” folder I found two great shots that I have no memory at all of taking.

The first I can understand forgetting—I’ve always hoped to get nice frozen shots of action, so I possibly set this photo from 2009 of a flying carpenter bee aside as a failure because of the motion blur on the abdomen (though the wings are pretty well frozen. The wasp was successfully captured motionless in mid-air, but I may not have even noticed that it wasn’t sitting still on a plant. It took fresh eyes to appreciate the photo, motion blur included.

As for the second photo from 2003, it blows my mind that I forgot about a gigantic Painted Lady butterfly landing on my neighbor’s roof, especially considering that it appears that I hit the ground in an effort to avoid possibly being probed for nectar. 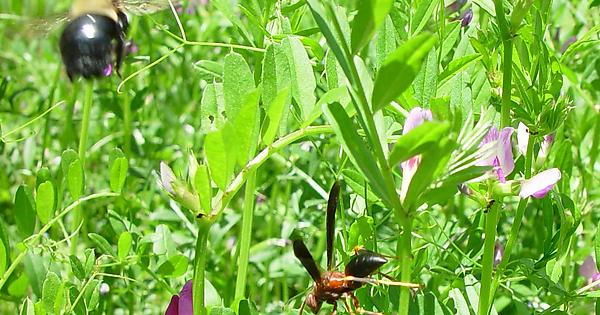 While camping at Seaquest State Park, near Castle Rock, Washington this past week, a doe and 2 fawns strolled through our camp site. My wife and I stood outside taking pictures about 20 feet from the deer. Later while hiking a trail with my dog, I saw the deer again. Thursday, while packing to leave, a small red dragonfly found his way into our trailer. My wife convinced it to crawl onto a finger and she took him outside. .

Ha! I’m sure your neighbor wouldn’t have forgotten it either.

And we saw ANOTHER bear today, just diddy-bopping down the street in the middle of the neighborhood we are staying in. It appeared to be wearing a tracking collar, and our host told us that’s the ‘neighborhood bear,’ been hanging around for awhile.

Haven’t seen one of these guys in my 'hood in a while. This one is just hanging out on the window screen outside my living room: 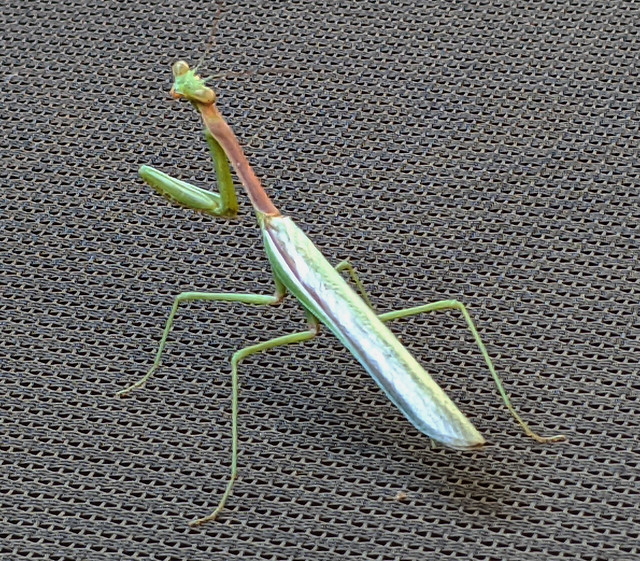 The thing about web-building spiders is that they tend to stay in the same place for a long time in a way that other creatures don’t. I can take photos of interesting beetles and moths and lizards and whatever, but moments later that individual has moved on, and the photos and observations I’ve made are done. But once I’ve found a spider’s web I can build a relationship with it (granted, it is a relationship of annoyer and annoyed…) and revisit for days at a time.

One spider that I’ve been annoying for around two weeks now is a tiny yellow nocturnal Lattice Orb-weaver (Araneus thaddeus.) I first noticed it on a plant on the side of my walking path at night when the light from my phone reflected off its web. Most of the Orb-weavers I find, I find because they build huge webs in proportion to their bodies, with the spiral orbs 2-3 feet across, and whole webs that can be 10-20 feet or more when you count anchor lines running to tree limbs and to the ground. But this spider had a tiny little orb of only 4 or 5 inches tucked under a single small branch. It also has rolled the end of a leaf into a cone and built a round nest of silk inside of it.

I have never happened to catch it in action feeding, but I did one night happen to see it just after a molt—the shed exoskeleton (more insubstantial than the lightest feather and looking like a facehugger from the Aliens franchise) was still attached to the web and the spider still wearing light pastels on its unhardened legs. Another time during the day while trying to photograph the previous night’s web I noticed a tiny Assassin Bug nymph wandering around near the spider’s leaf (and once rearing up like the world’s smallest, ugliest horse.) It was probably not a threat to kill the spider, but just in case after a few photos I blew it away with a puff of breath. (Which illustrates the difference persistent contact makes—if I had been able to follow that Assassin Bug around day by day instead, I might have been identifying with it and rooting for it to take out the spider.)

(The spider is always a canary yellow. The photos where it looks nearly white have been washed out by the camera. The photos are in chronological order.) 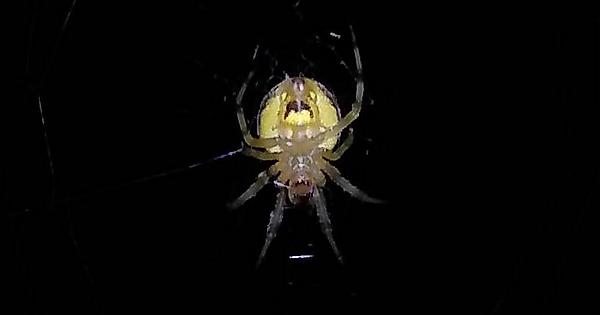 Haven’t seen one of these guys in my 'hood in a while.

Here in Minnesota, we finally got serious rain, which was quickly followed by serious bug hatching. It’s been a serious game with the mosquitoes every time I water my flower and herb pots. Today, I’ve been chasing stink bugs and house flies out of the condo entryway too. But it being September means that the yellow jackets are busy too. Happily, they aren’t looking for a way in yet, that will happen with the incoming cooler weather.

Is there any aphorism about making faces at the hand that feeds you?

My favorite dog found this coral snake Friday night, right behind the patio chair where I was sitting and drinking wine.
I rushed all the dogs in the house and just captured the tail of the snake as it vanished. 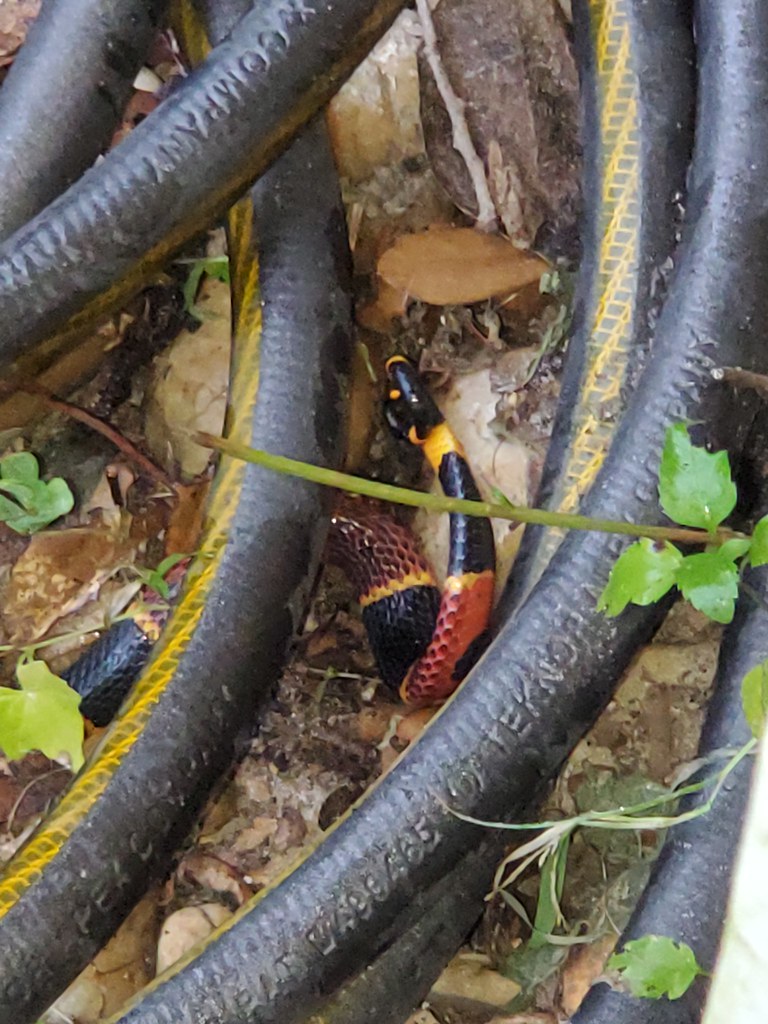 Florida. As close to Australia as we get in the US.

Finally got my Green-tailed Towhee mentioned above. I don’t keep a formal life list and I don’t typically chase rare (to my area) birds, but that one was an exception and I was pretty pleased to see it and get a few shots.

I rushed all the dogs in the house and just captured the tail of the snake as it vanished.

Pretty! Coral snakes are near the top of my list of NA critters that I’ve never seen but would like to. Thankfully they are really inoffensive, have very small mouths and deliver very small doses of (admittedly potent) venom. There are very few bites annually and only two fatalities since the 1960’s. Just don’t step on them!

Yes, I wasn’t worried so much for myself as for the dogs. They think snakes are all toys!