I was talking with a birder while kayaking and I mentioned Great Blue Herons getting startled by people then flying off a short distance.

He told me it is better not to startle them; they use considerable energy flying and often struggle to get necessary calories each day. We have been keeping that in mind and giving them wide berth.

There was a heron right off the bike trail yesterday morning. I felt bad about him flying off.

Saw a blue heron waiting for the shadows to fall just right so he could go fishing. He was sitting and preening right at the end of my brother’s dock. In the hot, midday sun, the fishies are under the dock, but as the shadows lengthen, they come out and Mr. Heron is ready.

There’s a great blue heron nesting in one of the trees out back. Sounds like a grumpy old man.

I’m outside tonight and hear shuffling around and using my phone’s light find a possum on the hunt, who procedes to track down, dig out, capture and eat what I’m pretty sure is a mouse. 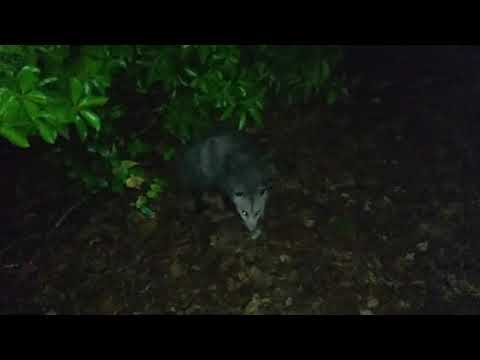 I’m struck by how good a job the possum does of feeding itself but once again at how poor a job it does of being cautious around the human. Not only does it not mind being followed and filmed, but at the end it walks inside a small trash can, which I then tilt upright. It was only by a fraction of a second that it managed to jump back out before the can was fully upright and the possum snarling for the camera. Yet somehow they manage to thrive even though their primary defense is to get so scared that they faint.

*The video quality is bad because it was night, with my phone, and the phone’s flashlight the only illumination.

**The phone’s microphone is sensitive but the noise cancellation is poor, so it always sounds like the video is being recorded by Darth Vader.

***I missed around the first 30 seconds of the possum loudly crunching on the mouse because I thought the camera was recording when it wasn’t. That was too bad—it was pretty crunchy.

I never got a picture (probably because I was scared sht**less) but when we were going on a long haul flight from Alaska to Vietnam pre-pandemic, we were caught in the middle of a storm and the turbulence was terrible. I thought it was only a thing in the movies, but the pilot flew us high enough that we went over the clouds and I was overwhelmed with the sight of sunshine over a sea of clouds. Nothing has took my breath as much as it did in that very moment. Sometimes I wonder, did I already die in that plane ride (sh*t was scary) and that I already saw heaven. But that idea easily gets shut down by the fact that I’m still paying for taxes, my Roth, and other bills. But damn… wish I could see that one more time before I die.

I worked out a deal to park our put-in vehicle and access Crooked Creek from a guy’s property for $10, so we were able to paddle a section of creek we’d never kayaked before. It was awesome with some nice riffles and a low-head dam a property owner had constructed.

We saw many kingfishers, and they seemed pretty nonchalant about sharing the waterway with us. Saw a fawn getting a drink while we quietly floated by.

What I read as an easy passage ended up a close call. The 100 yards was closer to 60, and we both barely made it by the strainer. Close call!

From a couple of days ago, and a trip to the Sussex Prairie Garden - some obliging butterflies. 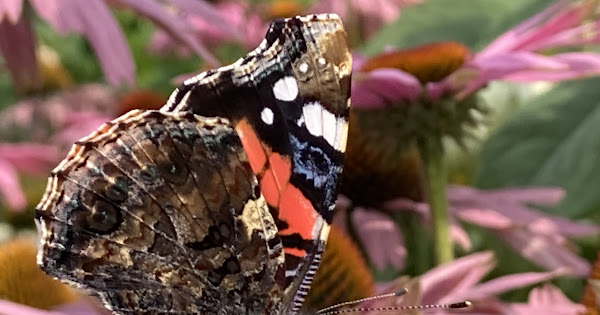 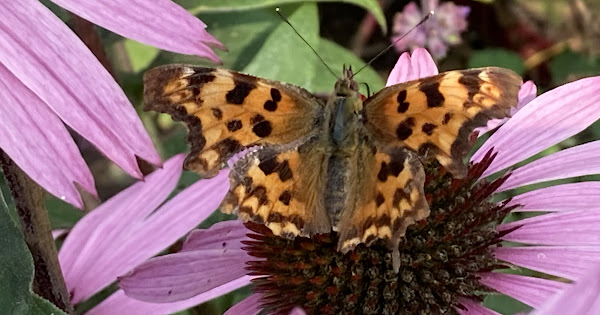 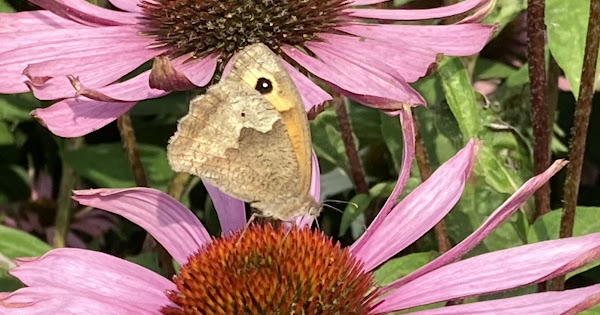 I managed to record The Guardian of the Hummingbird Feeder letting all the other birds know that the Songbird feeder now belonged to him as well. 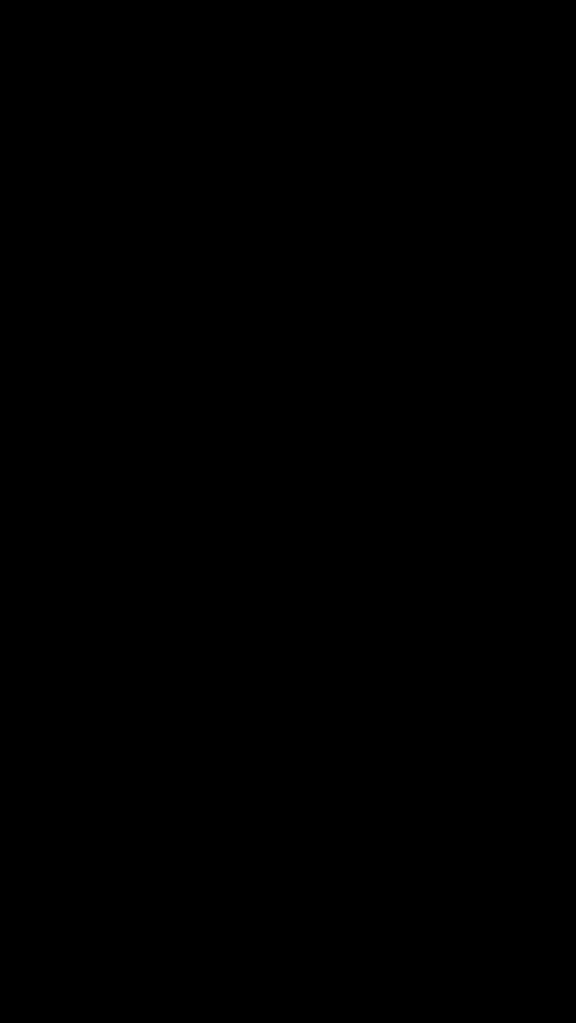 We were walking in the woods with our dogs yesterday while dinner finished cooking in the oven. Suddenly the dogs all froze. A huge bird took off from the ground in front of us, landing in a nearby tree.

The bird was a Great Horned Owl. It was eating what was left of a dead turkey (coincidentally, turkey was cooking at home).

This was the second time we’ve seen a GHO around our home, only my second owl sighting in the wild lifetime. I’m blaming the huge number of rabbits that were produced this past spring.

It was eating what was left of a dead turkey (coincidentally, turkey was cooking at home).

Ha! The other day I took this picture of some turkeys in our back yard. Coincidentally, the dogs were all inside at the time, eating turkey-flavored dog food. 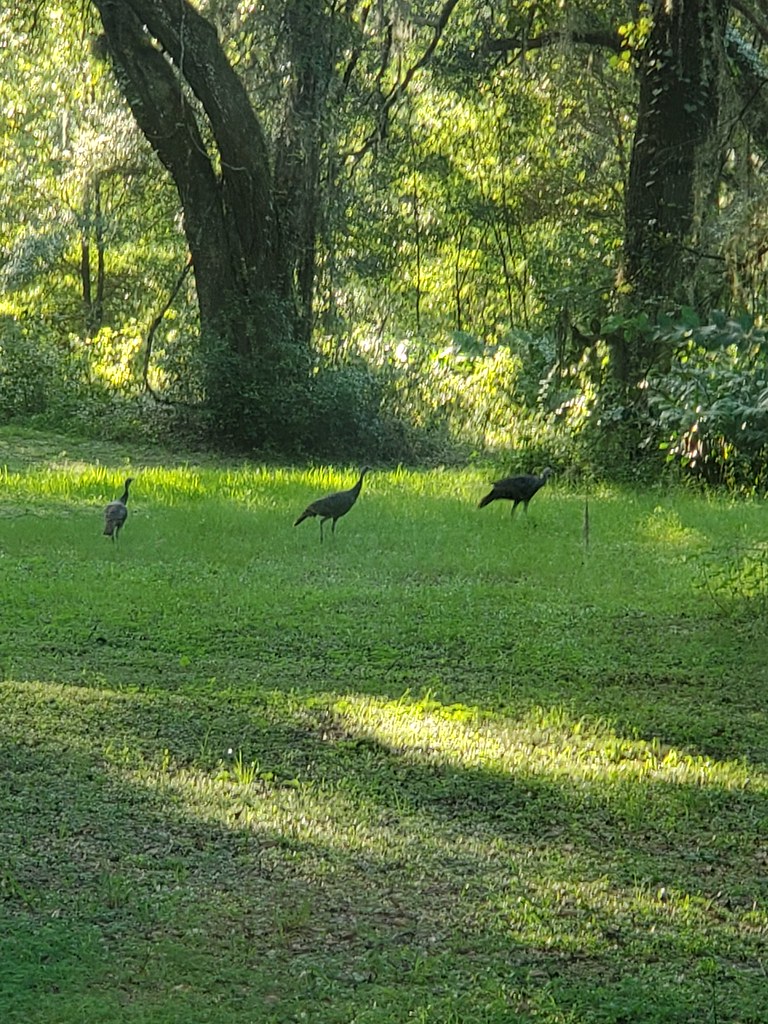 Your turkeys look lean compared to ours. Must be all the corn we put out for them. Plus, yours look like first year birds.

Caterpillars munching Swamp Milkweed oblivious to the lake waves below 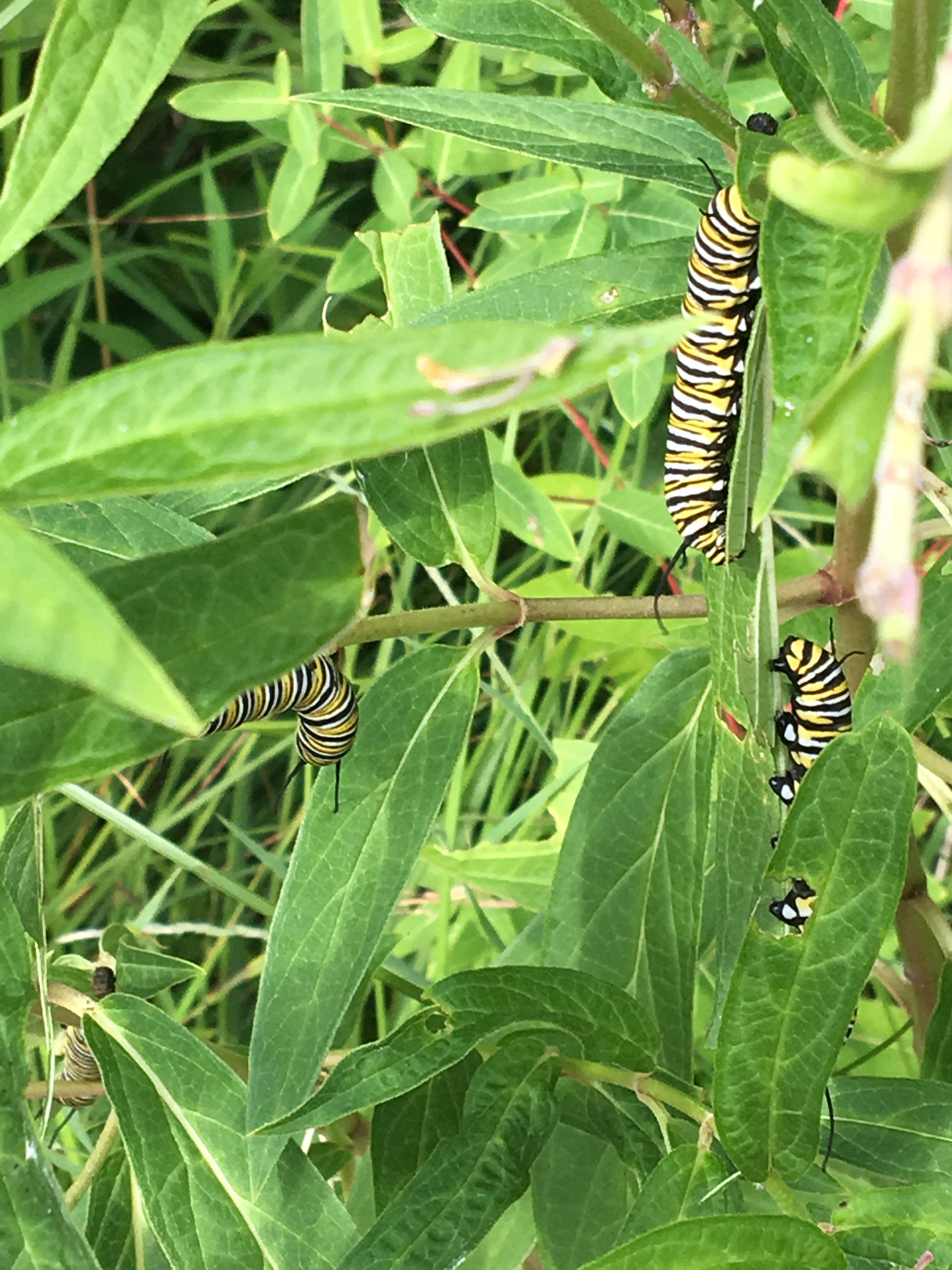 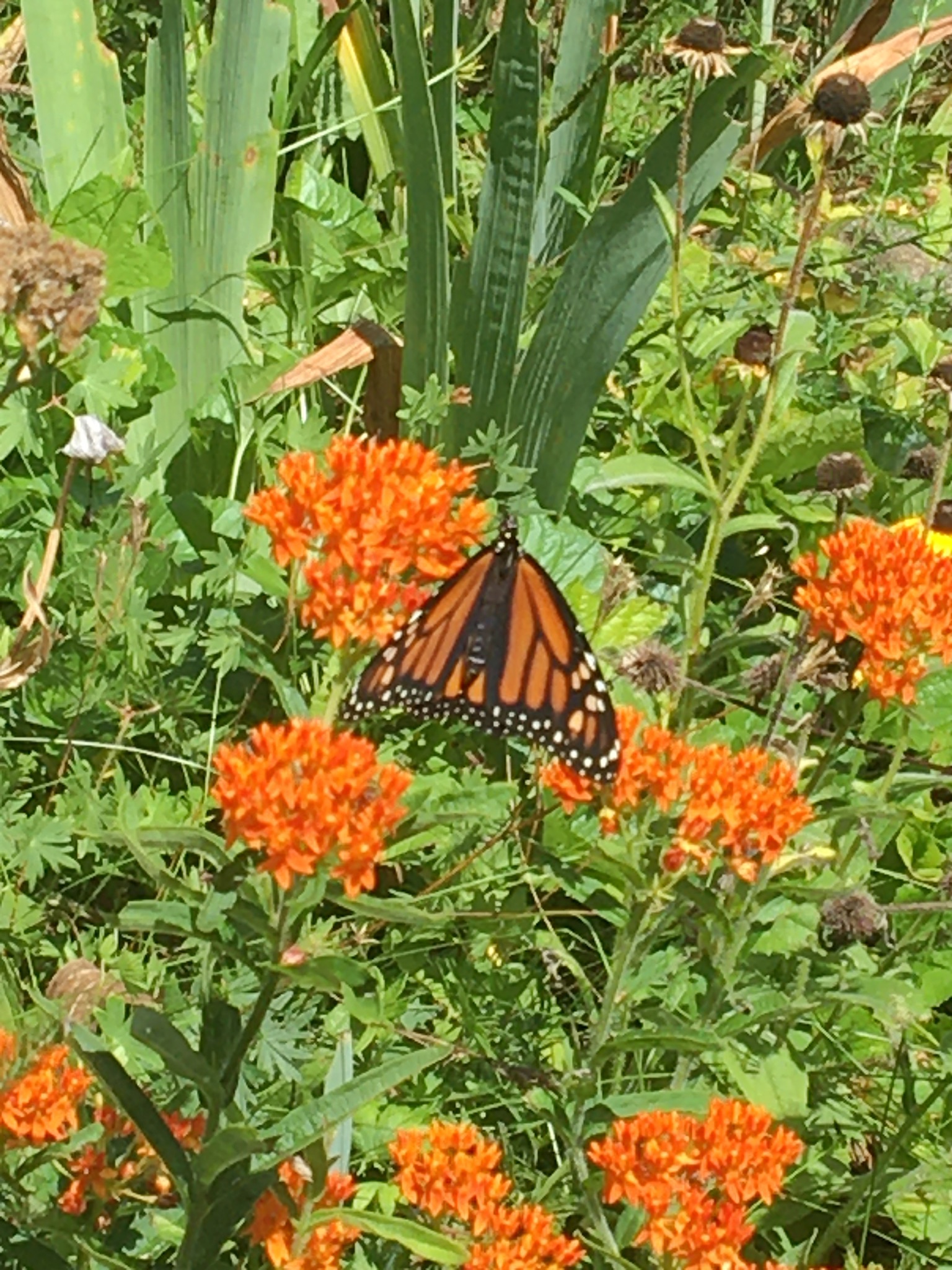 Ruby-throats are such dicks, lol.

Caught this during a lull in a thunderstorm early this morning. 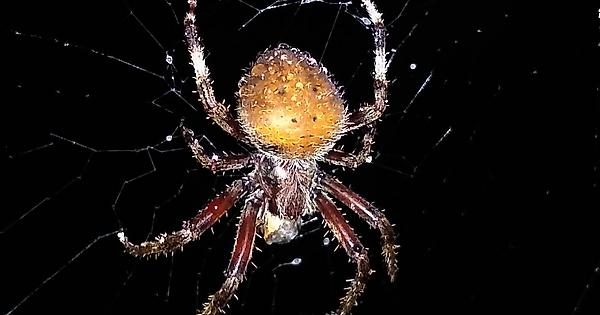 Raindrops on spiders and whiskers on spiders. Flying insects all wrapped up in silk. These are the things that I’m trying to filk.

A cool dragonfly I saw at Rock Creek regional park, near a small lake

Some research suggests that it is a male common whitetail. The wings are translucent, except for the black stripes.

The Guardian of the Hummingbird Feeder letting all the other birds know that the Songbird feeder now belonged to him as well.

That was hilarious. I miss the sound of hummingbirds scolding. Always cracked me up. Like, you weigh about a gram, and you’re giving ME shit?

…evidence of the season of mists and mellow fruitfulness being upon us. This was actually yesterday, not long before dusk. It had been rainy most of the day, cleared up late in the afternoon - the clouds got lighter, just enough for sunset to be apparent: 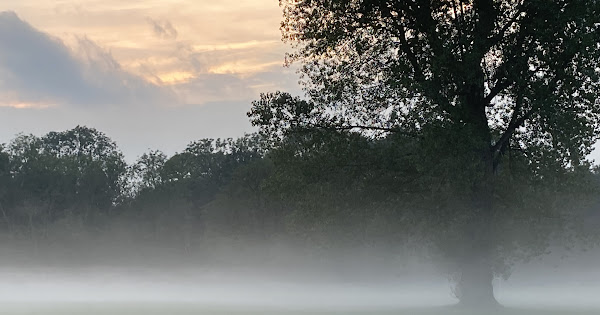 The odd thing was that there was no hint of mist anywhere else until we got to the fields near the river (which runs just behind the distant line of trees).

Bonus: from a couple of days ago, some obliging insects. A green-veined white (I think - feel free to correct me); a red admiral; and a bumble bee which, because of the angle I took the photo from, I can’t confidently identify - but I’m going with buff-tailed bumblebee 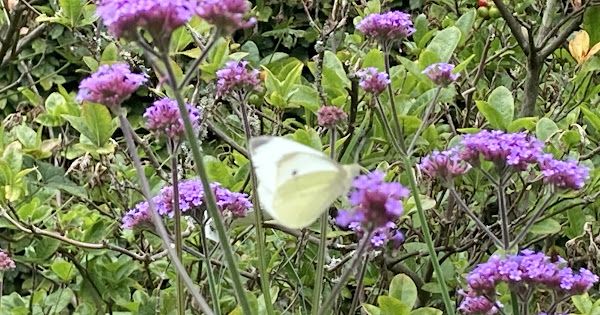 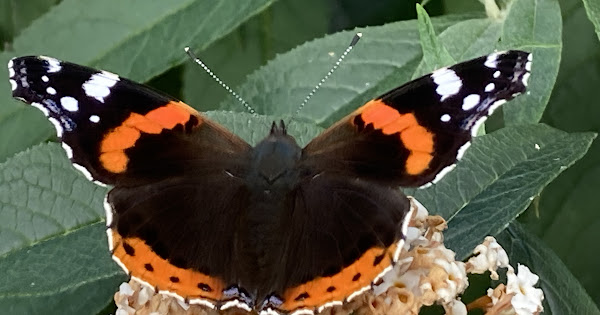 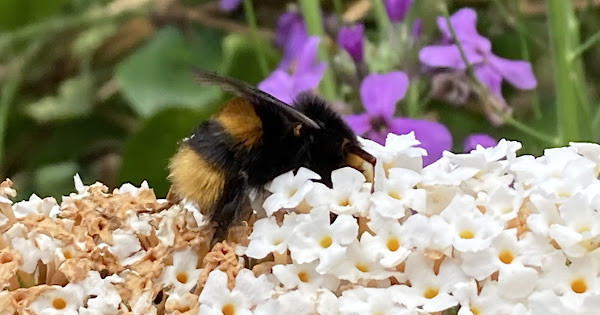 ETA - as these are all google photos, you get to see the full photo by clicking on it.

Walked outside about an hour ago. It was almost dark, and—I discovered—lightly raining. I nearly walk into a near-face-level tangled, disorganized web with a large, nervous spider bouncing around in it. I was suprised to find this beauty, which is obviously an orb-weaver species despite the ugly web. Around the size of a writing spider, Google Lens is telling me that it is a Golden Silk Orb-weaver (Trichonephila clavipes) which makes sense geographicly, but the abdomen color patterns are significantly different from any photos I’m seeing, so the ID is tentative. (This is the first one that I’ve ever found colored like that. It’s kind of sad how excited I was to see it.) 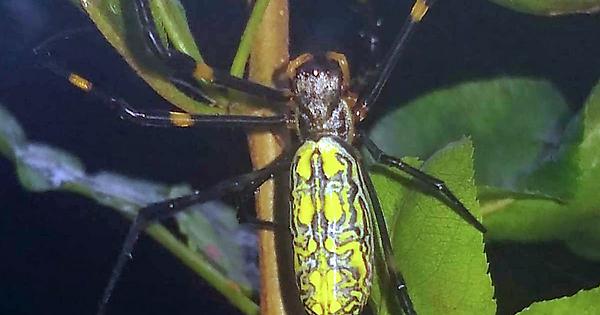