Aphids don’t really fly much. They’re food for lots of predatory insects, though - most famously, ladybugs.

They also attract ants, who like their sugary excretions. Some will even “ranch” the aphids, protecting then from predators and even herding them to better food sources.

Aphids will also weaken or even kill your plants.

They sure showed up fast.

They are born pregnant.

This planet is so weird.

Saw a Green Anole (Anolis carolinensis) outside yesterday. I attempted several photos and video clips through a window but the conditions just weren’t right to get anything good with my phone, and I wouldn’t have bothered posting at all, except for…well, you’ll figure out why. 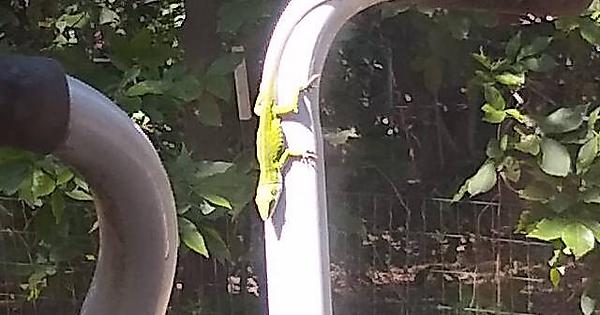 The funny thing is, late in filming the (more than 6 minutes) of short clips I was noticing that the exposure of the camera was making it look brown instead of green for some reason. Then I looked up at the anole and saw it was pretty close to what the camera was showing after all, so I gave a mental shrug. It wasn’t until reviewing the photos and video later that I saw that it really had started off bright green and the little effer had gaslit me in plain sight.

It’s late Sunday night in late September on a very rural resort/campsite in north west France. The weekend is over and most everyone shipped out today. We are sitting and listening to an owl (or owls) hooting like crazy. Fabulous. Seems like they took the place over again.

Today in nature, from my secret spot I saw a bunch of granite beneath blue skies and puffy clouds: 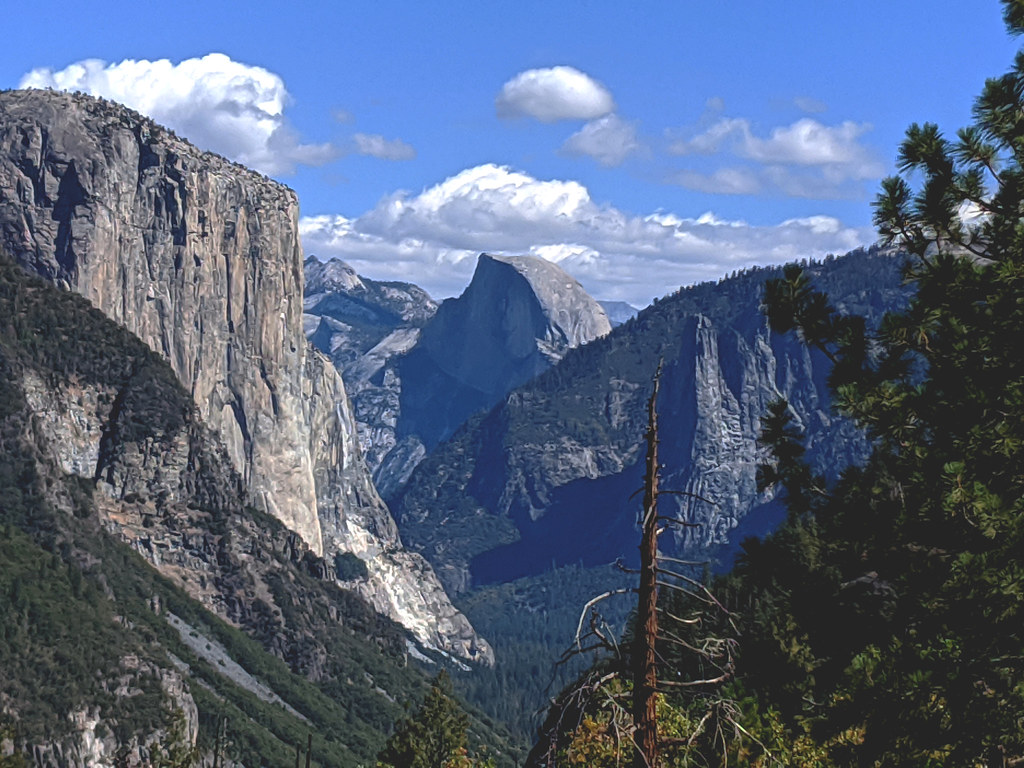 Yesterday I saw the largest mantis I’ve seen here in Wyoming to-date, on the side of my house: 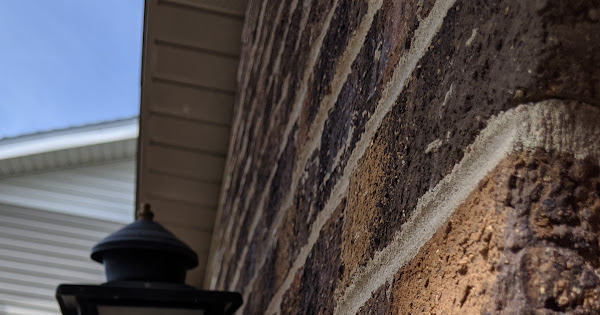 I thought her abdomen looked quite distended, and thought she might have been needing to lay her ootheca. However, a few hours after that first photo, she was still on the side of the house, looking a little worse-for-wear… 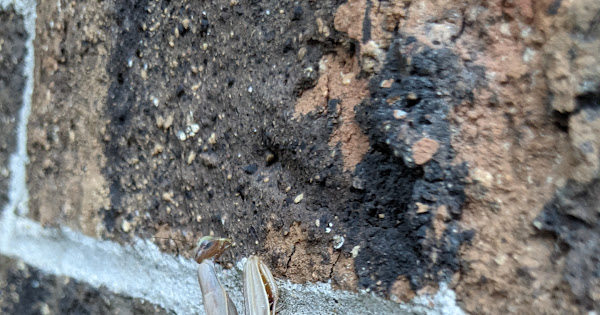 Not sure what was going on there, but it made me feel bad for her.

Big vee of canada geese heading south, above the farm. I love their honking cries as they go.
And then, on the interstate, a few miles south of the Vermont border, a bald eagle went by. I thought it was a great blue heron for a second, it was so big. They nest along the Connecticut River I read. First one I’ve seen on the east coast.

Also, a lot of chipmunks.

More owls tonight and earlier today we saw a kingfisher on one of the lakes on the site. I was trying to count how many times I had seen kingfishers - six, now seven I think. There’s other stuff, photos, that I’ll post when we get back home (because I have failed trying to post it from my phone).

There is a small deer that has been hanging out near the edge of the forest behind my complex. She (I think it’s female, anyway) is pretty bold and doesn’t scamper away when I walk past.

Also, if outer space counts, I’ve been observing the Pleiades through binoculars.

Having moved 2 weeks ago to a new area, I’m still exploring the local wildlife- I thought I’d heard some tawny owls in the distance last week, but at about 1:30 am this morning I got woken up by a very vocal one, really close. I could actually see it through a crack in the curtains without even getting out of bed- silhouetted, perched on a street light maybe 20 metres away (light switched off- they’re turning most of them off here at about 1, presumably to reduce light pollution) bobbing his head and hooting, before taking off.

Pretty cool, even if he did wake me up. Better than the main other wildlife I’ve noticed here, which is crane flies constantly showing up in my bedroom… I like insects, I just don’t appreciate the way cane flies’ legs fall off.

Returning to the subject of herons…

This wasn’t today, it was actually six days ago, in the Baie de Mont Saint Michel. In a typically French manner, for about twenty dollars you can be piled onto the Train Marin - which consists of two old farm trailers being pulled by an old tractor - and, at low tide, be trucked out into the bay. You know, where the sea is. 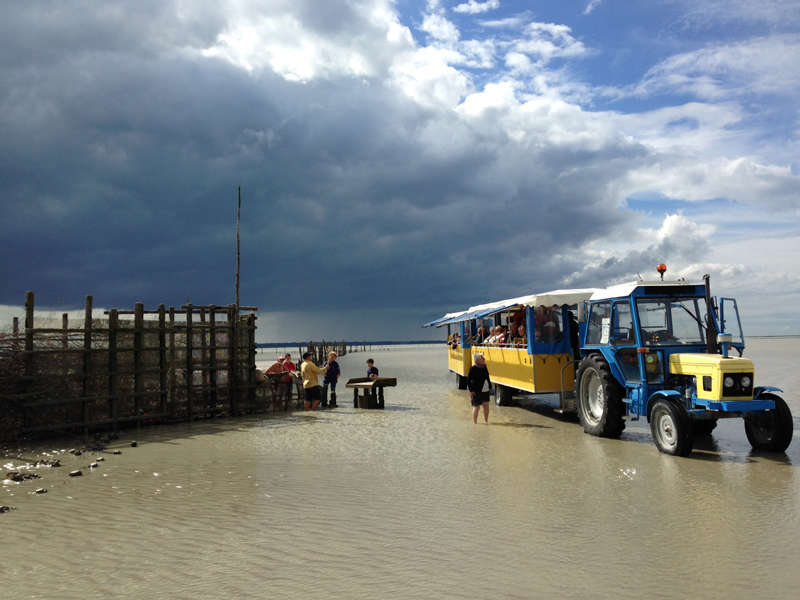 From Cherrueix, the Marine Train allows you to discover in a unique way the riches of the exceptional Bay of Mont Saint-Michel. The days and times of visits are punctuated by the tides. Our driver-guides take you up to 5 kilometers from the shore for...

Unusual experience. There was a moment during the journey when I saw a composition lining up, and without time to think just pointed the phone and clicked. Here, after a certain amount of cropping (but no other editing) is the result. 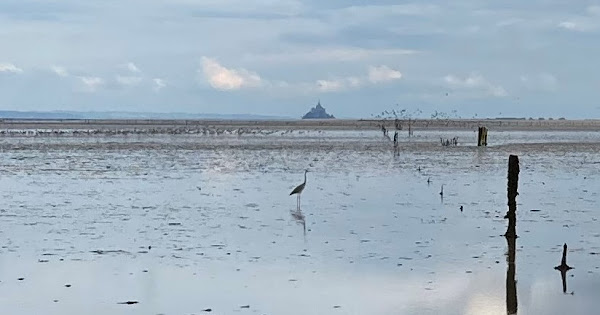 I’ve already mentioned a few of the things we saw (and heard) on our trip. Here’s another I have not yet mentioned - maybe you need to be British to understand why I was so pleased about this. Within literally half an hour of arriving, we saw a red squirrel. 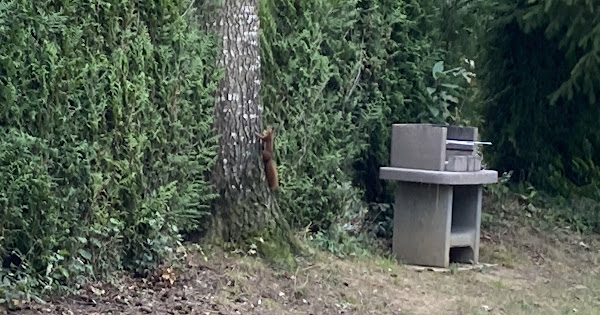 They are pretty much extinct in England now, outcompeted by the import grey. The number of times I have seen one is probably in single figures (and I think always in France), but we saw two while we were away. Trust me, it was great.

Too late to edit.

And ate, actually. In the middle of the bay our guide was picking seaweed and handing it around for people to try. Raw seaweed - this particular species - is not bad; would not go amiss on a salad.

That’s another one to tick off.

Big moose just walked up our driveway. Again. Full rack and long beard. He’s behind the house somewhere I suppose. This is nearly a daily occurrence.

We have taught the dogs to ‘wait’ when we open the door take to them outside so I can check things out before they go out. They did chase a moose once. Luckily, the moose just wandered off.

Moose look slow and docile. But they can be VERY dangerous. Imagine a horse with horns that decides it’s gonna kick your butt. Ya gotta leave them alone.

A person was cited up here for disturbing wildlife when she tried to approach one. The person was a tourist in town.

Don’t know if I mentioned this, but we had a momma bear a 2 cubs on the deck a few weeks ago. That’s real dangerous. I saw them first and rushed downstairs to alert my Wife as she was about to leave to go to work. They wandered off.

That’s another one to tick off.

A couple of white fairy terns live on our condominium grounds. They sleep on the same tree branch every night. They are white white and easily seen in the dark. Can look scary too – one day one sat on the rail in front of our unit and just stared in with an obvious attitude. They are protected, but the population is considered stable.

Had to chase ‘wild’ horses out of my yard three times in the last 2 days. Nasty Bastards!

I noticed these little blue flowers growing around the base of some large bushes we have in the front yard. They caught my eye since blue is a color you don’t see in nature often. Google says they are a dayflower, and they are edible, though I don’t think I’ll give them a try.