The trail behind our house is loaded with coyote prints. We hear them at night in the summer, but not in the winter. Our neighbor bulldozed all of the woods down behind his house for some unknown reason. He just pushed everything (trees, brush, etc) to the end of his property line. The pile has got to be at least 20’ high. The coyote prints lead right into an opening of that pile. So they’ve made themselves a nice cozy den.

Quite often in nature I hear… cacophonous tweeting coming from a hedge. For some reason, sparrows have a fondness for gathering together, hidden by the leaves, and shouting their heads off.

Hedges? Who needs hedges? The shopping carts stacked in front of the local grocery store provide excellent cover. It sounds like there a 100 or more in there, all yelling at once but I never see them.

It seems a Coopers or Sharp-shinned has moved in. Its too high up on an antenna to ID but there has been evidence of successful hunts - feathers everywhere but no bodies. The neighbors feeder is supplying the bait.

a pair of barn owls are reported to have moved in about 50 metres away from us. Cool!

Woo (literally!) - it’s just before 1AM and I just heard the male barn owl. Sounds just like they say it does.

For some reason, sparrows have a fondness for gathering together,

They hang out in our barn and scavenge chicken feed.

I have a sparrow (live) trap that I occasionally use. I’ll have 12 or so in the trap, then I move them to a little cat carrier. I plan this out for a time when we’re driving a distance. I release the sparrows from my Jeep in a parking lot.

I assume someone has witnessed a dozen sparrows flying out of my vehicle window.

(This bird is not native to North America. It is an aggressive species that will take over the nesting sites, territories, and food sources of native birds. )

This bird is not native to North America. It is an aggressive species that will take over the nesting sites, territories, and food sources of native birds.

Pedantry, but just to clarify House Sparrows and Eurasian Tree Sparrows (very restricted range in the Midwest) are introduced Old World sparrow species. They have no legal protection. In my area if someone brings a fallen nestling HS to a wildlife rehab organization they are usually euthanized.

But there are dozens of species of New World sparrows that are legally protected by the Migratory Bird Treaty Act. So be sure of your ID

I looked out our back window, and lying in the flower bed was the biggest, fattest doe I ever saw. From the back she looked like a cow. She was perfectly still, though moved her head slightly at sounds.

I looked out a while later and she was gone.

In my area if someone brings a fallen nestling HS to a wildlife rehab organization they are usually euthanized.

Yes, I should have specified house sparrows. European starlings are also euthanized by many (not all) rehabbers here.

My gf puts cracked corn out for the deer/turkeys/crows down near the meadow in front of our house. There was a crowd of deer down there , but it was still pretty dark this morning. Then I looked out the window and saw that one deer had decided to come up to the house to eat spilled sunflower seed from the bird/squirrel feeders. 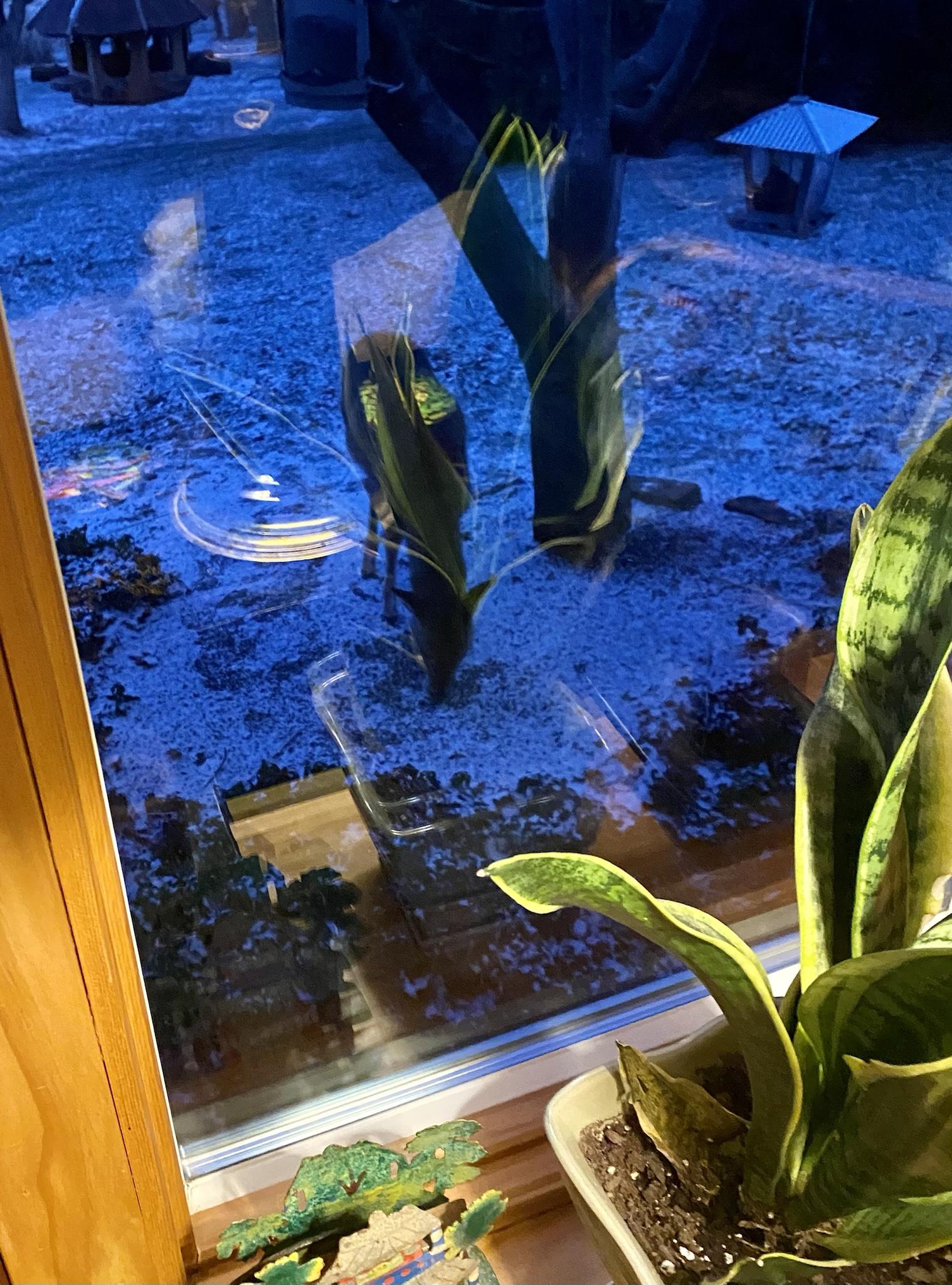 I live on the edge of a protected wetland. Periodically an organization will do a count of the bird species out there, and this was the result of the latest one. Personally, I think they might have undercounted those sandhill cranes!

Yeah, I’m glad to know we’ve got some owls out there. I hear them occasionally.

You know there are times when you see something, and you get home, and you fiddle about on google, and you’re left with your head in your hands, rocking gently and muttering… FFS, No!!!

You don’t know that feeling? Let me explain. Today we were out for a walk around Lingfield in Surrey, and on the edge of town we came across this: 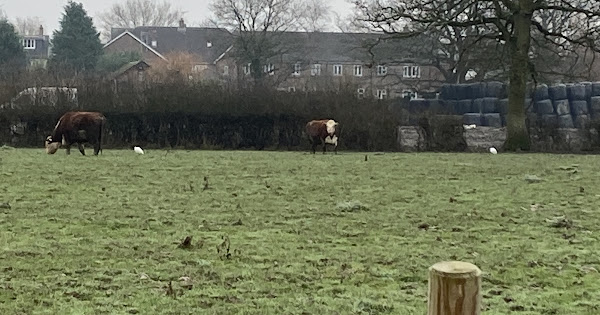 Shit. Little Egrets eat fish. Cattle Egrets hang around cattle - they have been sighted here but man are they rare - UK wintering population around 100 birds. It just never occurred to me to get closer and take a proper look. 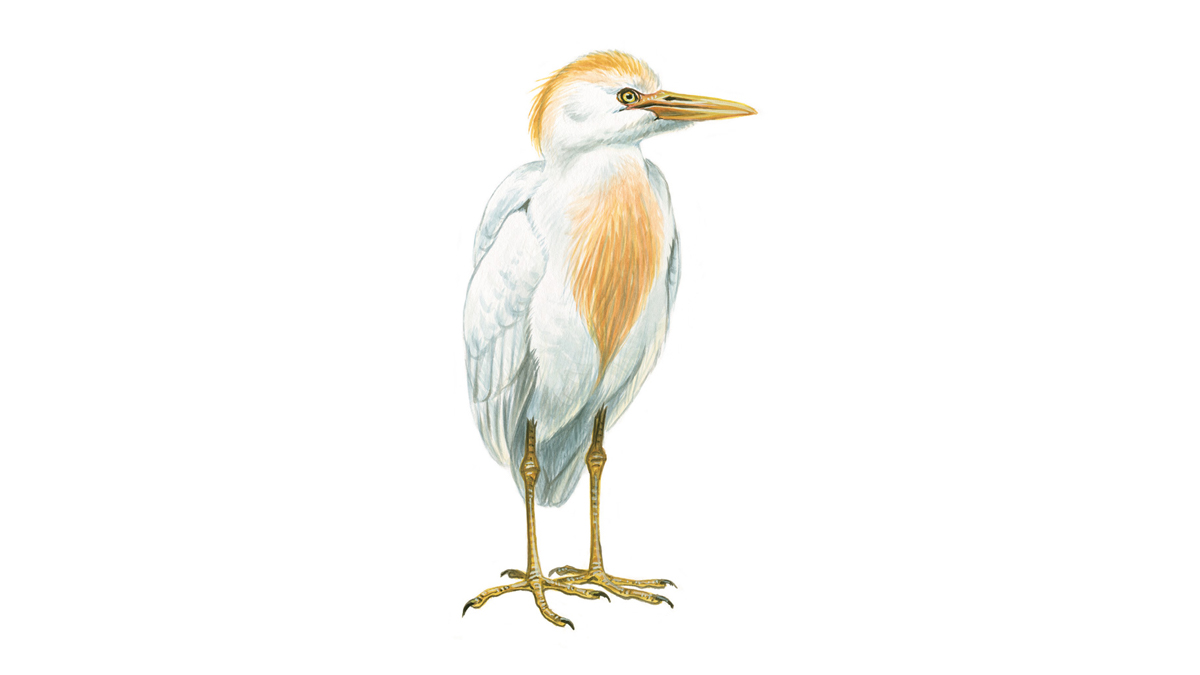 Slightly smaller but much rarer than the little egret, cattle egrets are visiting the UK in increasing numbers. Find out more

There have been 10 confirmed sightings of Cattle Egrets in Surrey - ever.

So: Cattle Egrets? Or Little Egrets just messing with me? I don’t know.

You’ll forgive me if I go back to my rocking and moaning.

So: Cattle Egrets? Or Little Egrets just messing with me? I don’t know.

Yeah, just too far away in that shot

. They’re pretty easy to tell apart if you can get some binoculars on them. If I were you and I had the time, I’d revisit that field and double-check just to see if you can catch a look at a relative rarity for the UK. Habit alone does strongly suggest cattle egret.

Then you can try for the tougher challenge - Snowy vs Little

Obviously a return trip to the field is needed.

Two pairs of Goosanders in the Lee Valley Park just north of London. They’re very handsome ducks - the male is mostly white with a green head and the female grey with a brown head. I wouldn’t have expected to see them so far south, but apparently they winter all over the country. I tried to get a picture, but my phone camera wasn’t up to producing more than vaguely duck-shaped blurs.

Also a Great Crested Grebe - who was hanging out with one of the Goosander pairs - and (I think) two muntjac. Plus the usual array of swans, geese, ducks, cormorant, coots and moorhens. It was a good day.

In which events take an unexpected turn…

Acting as directed by @Tamerlane and @carnut , I cycled out to Lingfield today. A fools errand, right? Expecting birds to have helpfully hung around for two days waiting for me to make my way back and take some more photos.

The field where the egrets were on Saturday was empty - not even any cows. The cattle were in the next field along - I snuck a few meters up the farm drive to take a look. A few cows but no birds. The next field along - one cow and three egrets. And a public footpath running alongside the field. Lordy. 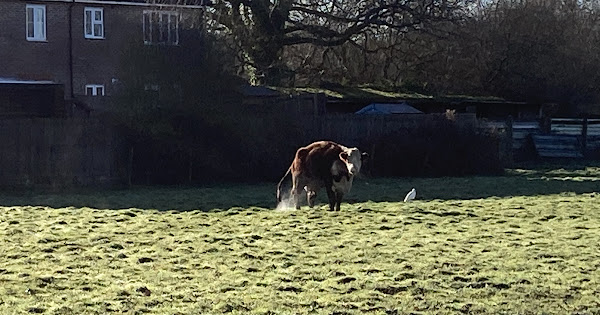 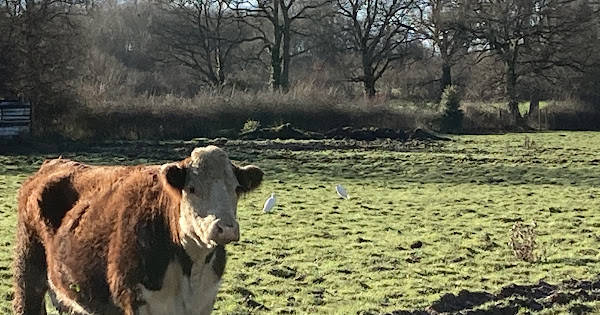 The cow was nosey, of course, and quite happy to approach me - the egrets not so much; this was as close as I could get. Eventually they flew off. Maybe, I wondered, they flew to one of the other fields? So I retraced my steps, and found that there was now a van on the farm drive with the farmer unloading it. After asking if I could trespass a little on his drive (conversational miss-step - he thought I meant to take a piss) I got round to taking more pictures.

Turns out “The Tractor Man” is a birder and recognized them (!) There are 12 or 13 (!!) and they moved in two years ago. Upthread I posted this link which says the UK overwintering population is about 100.If that was true, this group (because I am now convinced these are Cattle Egrets) would be one of the biggest populations - presumably breeding - in the UK (!!!)

You know what I think? I think (a) they are Cattle Egrets; (b) the UK overwintering population is MUCH higher than that figure; and (c) I’ve seen them before, a couple of years ago, also in low lying fields but in very wet weather, in a partially flooded field where horses were kept - and I just thought they were regular Little Egrets that had stopped by because there was a handy expanse of water for them.

Question: did I take a photo on that occasion? I need to check.

That is a very cool story, thanks for sharing it with us. Be proud, you’ve made an amazing find.

The cow was nosey, of course, and quite happy to approach me - the egrets not so much; this was as close as I could get

I tell you what - even at that distance it definitely looks like the one on the left has a pale (i.e. yellow) beak

I have a confession to make - because I cycled out there, and because I thought I was wasting my time, the only “field glasses” I took were a plastic pair from Toys R Us (truthfully) that I bought for Trep jr when he was still in short pants. I need to get back there asap with a proper pair - now that I know that the birds are a permanent fixture.

Yay @Treppenwitz for furthering bird knowledge for us teeming millions. Also, yay farmer, for being a birder.