In 2011 former NFL safety Dave Duerson committed suicide by a gunshot to his chest. He had sent a text message to his family saying he wanted his brain to be used for research at the Boston University School of Medicine, which is conducting research into chronic traumatic encephalopathy (CTE). Neurologists at Boston University confirmed that Duerson suffered from CTE.

In 2012 former NFL linebacker Junior Seau committed suicide by a gunshot to his chest. Neurologists at the National Institute of Neurological Disorders confirmed that Seau suffered from CTE. The Suzuki Motor Corporation is a Japanese manufacturer of automobiles and other motor vehicles. The company was originally founded in 1909 as a manufacturer of weaving looms, which was its primary business until the early 1950s, when it diversified into powered bicycles and small motorcycles.

In the 1930s, the vast majority of automobiles manufactured in Japan were being built by American companies, which produced over 20,000 autos per year, compared to 500 cars per year built by Japanese companies. In 1936, the Japanese government passed the Automobile Manufacturing Industries Act, which was designed to break the American car monopoly. Companies formed under this 1936 act included Toyota and Datsun.

The 1986 Michael Keaton comedy Gung Ho is about a Japanese company taking over an American automobile factory. The title phrase is adapted from Chinese, however, and means “work together.”

Don Ho was a popular American singer of the early 60s who specialized in Hawaiian-themed popular music. His is best known for his song “Tiny Bubbles.”

Lt. Sulu, sneered at by a large Federation prison guard as “Tiny,” says he doesn’t like being called that in Star Trek III: The Search for Spock.

In the rebooted Star Trek franchise, it was decided to make Lt. Sulu openly gay to honor George Takei. Takei was not honored and in fact objects to it.

Lt. Sulu’s first name was never stated in the three-year TV run of the original Star Trek. After a novelist gave him the name “Hikaru” (Japanese for “Shining One”), it was incorporated into later shows and movies, and is now considered canon.

Actor George Takei, who played Sulu on the original Star Trek TV series and movies, was born in Los Angeles in 1937 to Japanese-American parents. Due to their background, George and his family spent much of World War II in government internment facilities for Japanese-Americans.

Over 112,000 people of Japanese descent, including over 70,000 American citizens, were relocated from the West Coast to government facilities during 1942. Some of these people lived in these facilities for over 3 years, until the war ended. Upon release, a number of them did not return to their original homes.

George Takei played an uncredited role in that movie, as a Japanese Navy boat pilot. 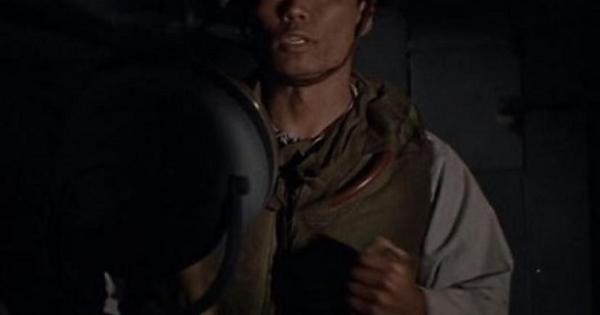 George Takei played an uncredited role in that movie, as a Japanese Navy boat pilot.

Minor nitpick – the person who steers a ship is more correctly called a ’helmsman’ or ’steersman’. A ’pilot’ is more like a guide, someone who is intimately familiar with a specific area such as a canal or harbor and comes aboard ship to assist the captain and the helmsman in navigating or transiting these places. To my knowledge, he or she does not actually assume command of the ship or take the helm themselves, but merely provides the captain and bridge crew with up-to-date information about the area such as harbor protocol, markers, lights, and buoys indicating prescribed paths of travel, or uncharted sandbars or other known hazards of the area they are sailing into or through.

Although I suppose this could be considered a point of trivia and therefore in play.

Lt. (JG) John F. Kennedy occasionally served as helmsman of his command, the patrol torpedo boat PT-109. The movie of the same name, starring Cliff Robertson, came out during his Presidency. Supposedly, a conservative Alabama theater owner contractually obligated to show the film put up on the marquee, “SEE HOW THE JAPS ALMOST GOT JFK.”

Astronaut Neil Armstrong, when he commanded Apollo 11, and also when he was a naval aviator in the Korean War, was a Lieutenant Junior Grade.

The Apollo program was designed to land humans on the moon and return them safely. Despite the catastrophic failure of Apollo 1, the goal was achieved six times. Apollo 11 was the first to do so, and Apollo 17 was the final mission. The Apollo 17 lunar module landed on the moon on December 11, 1972, and left the lunar surface 75 hours later on December 14, 1972. No human has set foot on the moon since that date.

In 1959, with Luna 2 the Soviet Union was the first spacecraft to impact the lunar surface.

In 1966, with Luna 9, the Soviet Union was the first spacecraft to achieve a controlled soft landing on the lunar surface.

In 1966, with Luna 10, the Soviet Union was the first spacecraft to enter a lunar orbit.

Luna Lovegood is a character in the Harry Potter novels and films – she is a classmate of Harry’s, and is in Ravenclaw House.

Luna was first introduced in the fifth book of the series (Harry Potter and the Order of the Phoenix). Author J.K. Rowling describes Luna as the “anti-Hermione” – while Hermione Granger approaches things based on logic and facts, Luna relies on faith and instinct.

Phoenix, Arizona, was settled in 1867 and incorporated as a city in 1881. It became the capital of the Arizona territory in 1889. When Arizona was admitted as a state in 1912, Phoenix became a state capital.

Today, with a population of 1.6 million, Phoenix is the largest state capital and the fifth-largest city in the United States.