Trump refuses to commit to peaceful transfer if he loses, says "Get rid of the ballots"

Trump on peaceful transition if he loses: 'Get rid of the ballots' and 'there...

"We're going to have to see what happens," Trump said. "You know that I've been complaining very strongly about the ballots, and the ballots are a disaster."

Any chance of Republicans standing up against him here? I’ll be shocked if we get anything more than very mild tutting.

Any Doper feel like defending him? I know we’re all probably sick of trying to comprehend, but what goes on in the mindset of someone willing to overlook this kind of thing?

It looks like a video of Trump speaking, so I can’t help you. Not clicking that shit. Is there a written version?

It’s an article, with text.

EDIT: I screwed up the Trump quote on the subject line - it’s “Get rid of the ballots”. I reported it for fixing.

“Get rid of the ballots and you’ll have a very … there won’t be a transfer, frankly. There’ll be a continuation.”

Actual thing that the actual president of the United States said today.

OK, short article, too. My thoughts are that I’m relieved that the secret service likely doesn’t give a shit about Trump’s beliefs concerning the election outcome, that Trump fully 100% already has plans about not leaving until the Supreme Court tells him to, and that he is a big fucking whiny baby screaming “unfair” and “rigged” all his life when he was born with a silver spoon that should have been shoved forcefully down his cry baby throat.

This combined with the reports that Trump is recruiting electors that will ignore the popular vote in their states and vote for Trump anyway, is pretty bad. We’re damn close to the “Lukashenko wins a sham election” territory.

Any chance of Republicans standing up against him here? I’ll be shocked if we get anything more than very mild tutting.

They’ll probably say you should take him seriously but not literally.

Technically, he’s correct, but that’s not how we do things in this country.

I don’t care if he accepts the results. He will be forcefully evicted even if he threatens to hold his breath and turn blue. If he thinks John Roberts is going to let him ignore the results he’s going to be disappointed. Yes he will declare that if he’s ahead at the stroke of midnight on November 4 then he wins. But that isn’t how it works, as we saw in 2000.

If he thinks John Roberts is going to let him ignore the results he’s going to be disappointed.

If he gets his nominee seated before the election, it doesn’t matter what John Roberts thinks. And Trump’s entire goal here is to muddy the waters so much that the country can’t agree on “the results.” Republicans are already bringing legal challenges to mail-in balloting procedures in dozens of states. If it looks like Trump is going down as the ballots are counted they’ll scream fraud, file dozens more lawsuits, seek to have ballots thrown out. They may well turn up a few cases of genuine voter fraud (and many more cases of unintentional irregularities). They will hype these example up to show that the vote was a sham.

If the vote is close and the muddying successful, that could give Republican state legislatures cover to award their electoral votes to Trump regardless of the vote outcomes. Or you could have states with two slates of electors claiming to be legitimate, as happened in the election of 1876.

Here is the transcript:

President Donald Trump: (00:17) Hello. Thank you very much. Thank you. Today, Johnson & Johnson announced that their vaccine candidate has reached the fina

He’ll probably fail, but no one knows at this point.

I’m hoping that Amy Coney Barrett, mother of Black children, won’t be willing to throw the election to someone obsessed with good white Minnesota genes. But that is just what DJT is looking for his Justice Department, and his Supreme Court, to do.

I’m probably the only person out there who thinks this, but I wonder if he might commit suicide rather than give up the Cheeto Throne. No, I don’t want that to happen.

No president’s brains ever had to be cleaned off the Resolute Desk before – but, then, we’ve seen a lot of unprecedented things in the past four years.

Has any other incumbent POTUS ever been asked such a ridiculous question? I don’t think so. This is “when did you stop beating your wife?” territory.

No, it isn’t. He could have made an entirely acceptable answer by simply saying “Yes.”

(BTW, the very best answer to the “Have you stopped beating your wife?” question is always, “I’ll stop beating her when she wises up, thank you very much!”)

Has any other incumbent POTUS ever been asked such a ridiculous question? I don’t think so. This is “when did you stop beating your wife?” territory.

Trump replied to the OP question with that more stupid “Get rid of the ballots and we’ll have a very peaceful… There won’t be a transfer frankly, there’ll be a continuation. The ballots are out of control”

But about him beating a wife… He is just about the one that question you tried to use in an attempt to ridicule the current one to be an appropriate one to drop on him. As for the matter at hand, Trump’s reply would be like admitting that he will hide the evidence. In both cases.

A powerful and thought-provoking article: 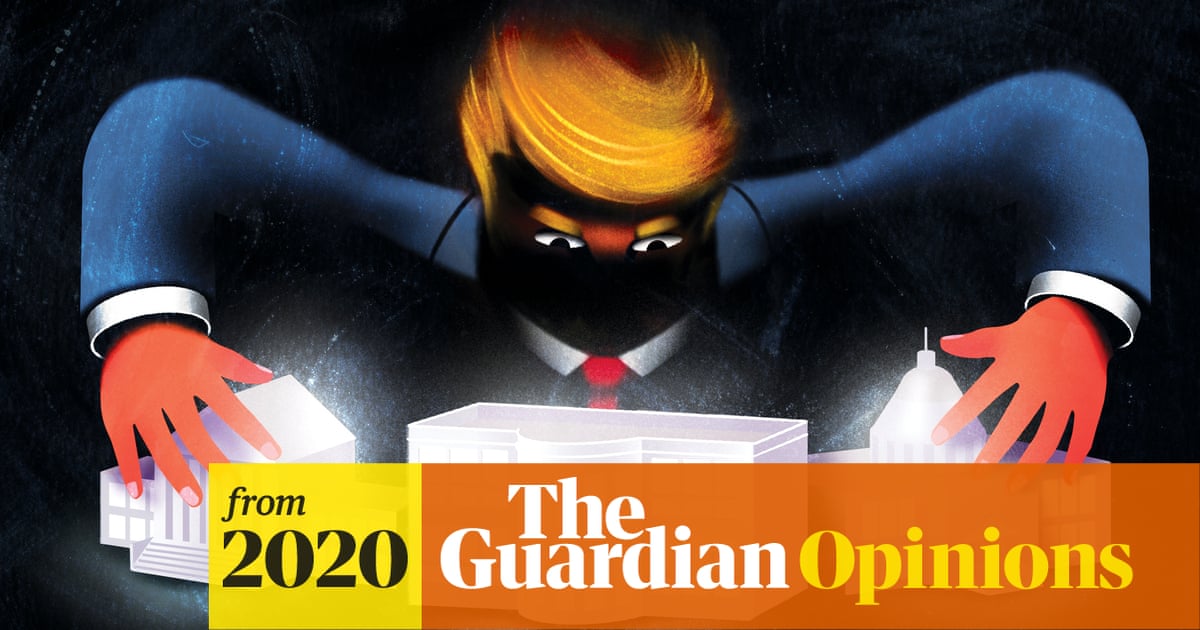 Even some conservatives fear a power grab might trigger the disintegration of the US. It’s happened to superpowers before, says Guardian columnist Jonathan Freedland

It seems unthinkable, but the possibility is real.

So now a dark question arises. What will the US’s increasingly progressive majority do if Republican state officials reinstall Trump in the White House, in defiance of the voters? What will they do if that 6-3 court overturns Roe v Wade and bans abortion across the entire country?

Think for a second how that latter situation will have arisen: it is because the Senate picks the judges, and the Senate enshrines minority rule. With two senators per state, tiny Wyoming (population: 600,000) has the same representation as gargantuan California (40 million). On current trends, 70% of Americans will soon have just 30 senators representing them, while the 30% minority will have 70. When it comes to their right to medical treatment or to rid their streets of military-grade assault weapons, the urban, diverse majority are subject to the veto of the rural, white, conservative minority.

How long is that sustainable? How long will a woman in, say, California accept the presence of guns and the absence of abortion rights because that’s what a minority of voters in small, over-represented states wants? Serious people are beginning to ask that question.

… Progressive, “blue” states might increasingly go their own way – flexing their right to deviate from the federal government, as branches of it move ever further out of democratic reach. … That, says Gerstle, could be a harbinger of things to come, including perhaps a revival of the pre-civil-war concept of “nullification”, whereby dissenting states declare decisions made in Washington null and void. It would be a historic turnaround for the American left: “states’ rights” was the rallying cry of the segregationist south, asserting their right to be racist. Now it could become the weapon of liberal America.

One tiny nitpick: I don’t think it’s possible for the SC to “overturn Roe v Wade and ban abortion” in one fell swoop, is it?