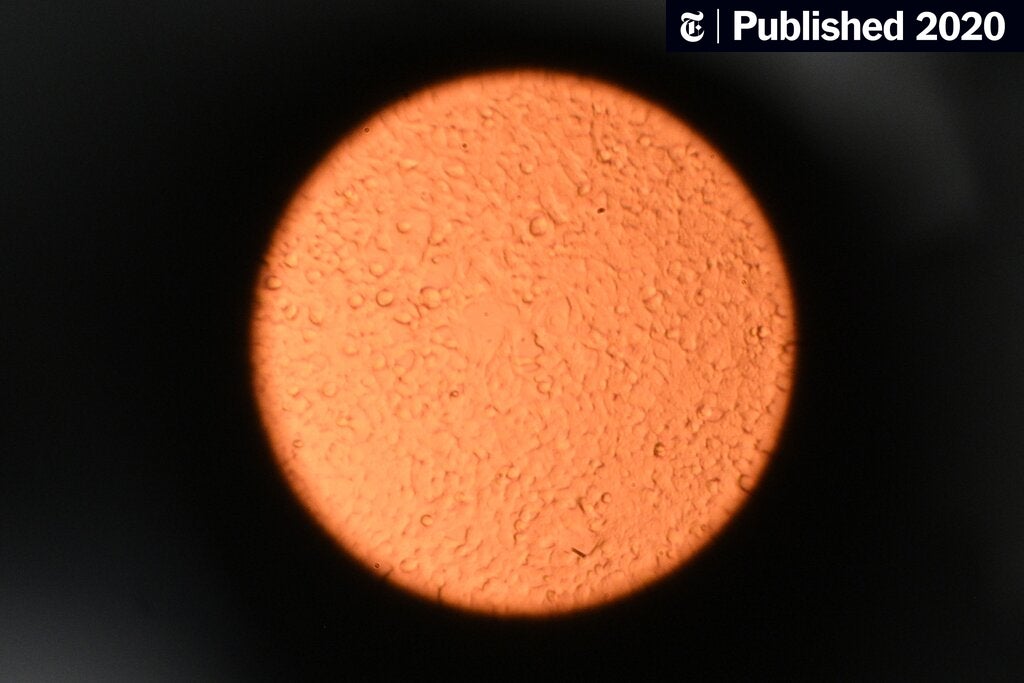 The “cell lines” used to develop monoclonal antibodies, as well as remdesivir and vaccines, began with fetal tissue decades ago.

…Yet the treatment for Covid-19 received by Mr. Trump — a cocktail of monoclonal antibodies he described as a “cure” in a celebratory video posted on Twitter — was developed using human cells derived from a fetus aborted decades ago.

Remdesivir, an antiviral drug that the president received late last week, was also developed with those cell lines. At least two companies racing to create a vaccine against the coronavirus, Moderna and AstraZeneca, are also relying on the cells. Johnson & Johnson is testing its vaccine in another so-called cell line originally produced from fetal tissue.

As participants in the White House’s Operation Warp Speed, all three vaccine-makers have received federal funding.

Some scientists saw a double standard in the president’s endorsement. “Hypocrisy has never bothered the man, as near as I can tell,” Lawrence Goldstein, a neuroscientist at the University of California, San Diego, who has used fetal tissue in his research, said of Mr. Trump.

The cells used by most of the companies now trying to find a Covid-19 treatment, called the 293T line, were derived from the kidney tissue of a fetus aborted in the 1970s. A similar cell line, Per.C6, was obtained in 1985 from the retinal cells of an aborted 18-week-old fetus.
…

This is research that the trump administration has tried to shut down.

Story here Throw another log on the woodpile of the Trump Party doing everything possible to make this situation worse.

I’ve seen this point a lot but I think it’s a pretty weak criticism.

No one in the groups that oppose this kind of research think that we shouldn’t use knowledge derived from it once we have it to treat disease. And the stock argument for years about this isn’t that they don’t think such cells could be useful, but that they find it morally repugnant and there should be other ways to do such research or we just shouldn’t do it.

There’s no hypocrisy here (a rarity for Trump!)

The needle on my hypocrisy meter is jumping.

If you think treatments or vaccines derived using cells from aborted fetuses are morally repugnant and should be banned, then at the very least it’s your duty to refuse such treatments/vaccines.

I haven’t heard a lot of yelping from antivaxers yet about the “aborted fetal tissue” angle for Covid-19 vaccines, but the issue has already been raised.

The United States has committed $13.6 billion to six drug companies in an effort to produce a COVID-19 vaccine as soon as possible, but in a hearing with

Bear in mind that no major religion tells its followers to avoid such vaccines - including the Catholic Church.

If you think treatments or vaccines derived using cells from aborted fetuses are morally repugnant and should be banned, then at the very least it’s your duty to refuse such treatments/vaccines.

I’m going to split some hairs here, but I don’t think there’s a good fruit of the poisoned tree argument for knowledge here.

The treatment that Trump received wasn’t derived from fetal cells, it was tested on them. It can’t be untested on them, and now that we have the treatment and know that it’s safe (by virtue of said testing), it’s not hypocrisy to receive it. If each dose of antibodies required new aborted fetuses to produce, that would be different. But it doesn’t.

Speaking as someone worried about a potentially large number of conservatives rejecting a COVID-19 vaccine anyway, I don’t think making a stink out this ethical issue for political points does much good. Do we want people to recognize their hypocrisy and say, “You’re right, I shouldn’t take this vaccine”?

They probably don’t realize that his medical care is also 100% socialist.

As is his statement about providing COVID drugs free to everyone.

They probably don’t realize that his medical care is also 100% socialist.

The government, as employer, providing medical care to one of its employees (the president) is in no way socialist and is categorically different from the government providing care to everybody.

As is his statement about providing COVID drugs free to everyone.

This is, and demonstrates yet one more way in which Trump is not a conservative.

The cells used in testing this drug have been cultivated for decades from a single body decades ago. There is no further harm done by continuing to use those cells. Continuing to allow new tissues to be used creates a perverse incentive for abortions to happen. It is not morally inconsistent to hold that harvesting new tissues would be unethical, but that using these existing ‘cell lines’ is ethical.

Not that I think the president has thought through it that way, but many pro-life people have.

On the other hand, many would say, “no, vaccines and treatments derived using these cells are unethical to use” and that is not inconsistent either.

Wasn’t using NAZI medical knowledge derived from unethical experiments on people morally problematic and debated if that should be used for medical advancements? There was even a Star Trek episode on that theme IIRC. I’m not sure what was done.

From the pro-life side, who believes that the fetus is a full person in that he/she should be thus protected as one, it would seem to be along the same lines if that should be used as it was derived from a medically unethical source? That assumes the source was from medical abortions.

On the other hand, many would say, “no, vaccines and treatments derived using these cells are unethical to use” and that is not inconsistent either.

Sure, and there’s also a consistent ethical position in the middle: that we should stop using those cell lines to develop new treatments, but also that existing treatments that have been tested on them shouldn’t be discarded or denied to people.

I’m talking about reactions of hard-core right-wing evangelicals who don’t think, who swallow whatever dogma they’ve been fed without question, who are incapable of really understanding what they believe or why they believe it.

I suspect the info that stem cells from ABORTIONS(!) were/involved in any part of treatment development will come as a brain-tilting shock and their heads will likely explode. Until a leader/pastor/guru/demagogue/demigod can make a new mind-paste mish-mash that will satisfy them.

Just on a factual issue here, the phrase “tested in cells derived from fetal tissue” can make it sound like scientists are putting half a dozen fetuses in a blender for every experiment. In fact, we’re talking about one of the most common immortal cell lines (293) that are used for cell culture experiments in petri dishes. The cell line derives from tissue taken from the kidney of ONE fetus, legally aborted in 1973 in the Netherlands. ALL the 293 cells used in every lab everyone in the world are descendants of the cells harvested in 1973, they are grown continuously in petri dishes, just like bacterial colonies are grown for experiments in petri dishes. Literally millions of experiments and a vast body of important research over many decades all derive from tissue taken from ONE fetus in 1973. Human embryonic kidney 293 cells, also often referred to as HEK 293, HEK-293, 293 cells, or less precisely as HEK cells, are a specific immortalised cell line derived from an aborted fetus or human embryonic kidney cells grown in tissue culture taken from a female fetus in 1973. HEK 293 cells have been widely used in cell biology research for many years, because of their reliable growth and propensity for transfection. They are also used by the biotechnology industry to produce therapeutic prote...

Nazi experiments aren’t really an issue. They were bad science for all kinds of reasons.

The experiments performed by Japanese scientists on Chinese subjects were scientifically sound. That’s why those scientists got pardons in exchange for their data.

I don’t remember the name of the episode but, it was ST Voyager. The Doctor is shocked to discover that somebody in his files as a ‘medical consultant’ was a war criminal. The Bajorans in the crew go on strike demanding those files be erased.

It’s not hypocritical to say, “Abortion is wrong, but since the fetuses are already dead, one might as well use them.”

Weren’t there some people who argued that we shouldn’t use knowledge and information obtained by Nazis through unethical WWII experiments? Yet the data is the data.

If Biden wastes this opportunity at the next debate, shame on him.

Given that this is more of a debate about the use of fetal tissue than a discussion specifically about Covid, let’s move it to Great Debates.

I’m good with that.

At first glance, I was sure I saw “fecal” tissue as the source for Trump’s treatment, and now I’m sorry I was mistaken; Biden wasting an opportunity at the next debate is even funnier.

It’s not hypocritical to say, “Abortion is wrong, but since the fetuses are already dead, one might as well use them.”

That’s not hypocritical. What is to say that it is unethical to use these cells, but as long as we did, I may as well benefit. But I will continue to deny any future developments based on such cells.