It’s unfortunate that Americans don’t really start paying attention to politics until a disaster strikes them personally, but this is the way it’s been for a while.

In any case, COVID appears to be changing the game. Bigly.

Interesting. I’m in a county in Wisconsin that went about 51-49 for Clinton in 2016 — in other words, deep purple, like the state as a whole.

We had good behavior and low infection rates until three or four weeks ago. Infections started to climb (though this week they seem to be tapering off; and, almost no deaths so far).

So, we’re one of those counties, it seems.

Don’t get me wrong, I of course really hope we get an effective vaccine ASAP, but my fear is that there will be a breakthrough (genuine or at least potentially genuine) in October 2020 and Trump will claim credit and the drooling masses who were dissatisfied with his handling of the pandemic will suddenly see him as a hero and switch their vote to him.

Probably not a likely scenario, but it does worry me.

I saw a chart about this very thing on Facebook earlier today. I did not click it to assess its reliability, but I suspect a little Googling would find it for you and you could judge for yourself.

This article may shed some light:

After being centered in blue states, cases are now being added faster in red ones.

I don’t think it’s behind a paywall (I think WaPo is making all its Covid coverage available to all, or is that Wired or NYT? I can’t remember) but apologies if it is.

The gist of it is that originally blue states were much harder hit, and even in states that were red overall, blue counties were worse off.

However, that is changing. Graphs in the article show a stark contrast, by either county or state, in the development of new cases. Blue states and counties are overall going down and red states and counties are overall going up (it’s not a smooth progression in either case, of course; there are a lot of spikes and volatility even when the overall trend is upward or downward).

One interesting point the article makes is that Trump’s decision to move the GOP convention from South Carolina (to punish the state for its insistence on pandemic-prevention measures) to Florida (which has been more lax) may end up to be a big strategic error, inasmuch as measures/lack of measures may mean that when convention time rolls around, SC will have reduced cases whereas Florida is going to be a shitshow.

From the article in the OP:

As long as Trump voters start turning against him, who really cares why?

No it is not. Trump has taken actions, made decisions, and issued public statements that have caused many of the problems we are now experiencing. And he is refusing to admit he was wrong and reverse his earlier mistakes.

There’s a lot of hype about a vaccine before the end of the year, but it won’t happen - no way it’ll happen in time to save Trump. His best hope is that his fanboys have an awakening and really begin taking the virus seriously in spite of what he says - that and continued improvements in treatment, which is something that could and probably will improve to some degree between now and then.

One interesting point the article makes is that Trump’s decision to move the GOP convention from South Carolina (to punish the state for its insistence on pandemic-prevention measures) to Florida (which has been more lax) may end up to be a big strategic error, inasmuch as measures/lack of measures may mean that when convention time rolls around, SC will have reduced cases whereas Florida is going to be a shitshow.

Trump’s best hope is that his supporters realize he’s full of shit and stop listening to him? I don’t see how that’s going to end up working out well for Trump.

And a well-deserved one.

I once managed to eliminate any hope I might have had for getting a job with a national association of state chambers of commerce by dropping a line, as I was on my way out the door, about some recent event in North Carolina, or, as I said at the time, while my paralyzed brain looked on in horror at what my tongue was doing “…Or, was it South Carolina? I’m not sure. Oh well, who knows, can’t tell the difference anyway. Oh my, what did I just say? Well, there goes any chance I had of getting this job!”

I slunk away and drove home, mortified. You will be shocked to hear that they never called me.

Somebody from Goldman Sachs said today that perhaps the best path forward is for masks to be mandatory, and everybody go back to work.

I’ve heard worse ideas (mostly, from the White House). (It’s so typical 2020 to get sound public health advice from a bank.) But I could see an outcome where masks become mandatory nationwide, despite Trump – his becomes the last unmasked face in America – and as he becomes irrelevant, his election prospects diminish likewise.

I uploaded one here: 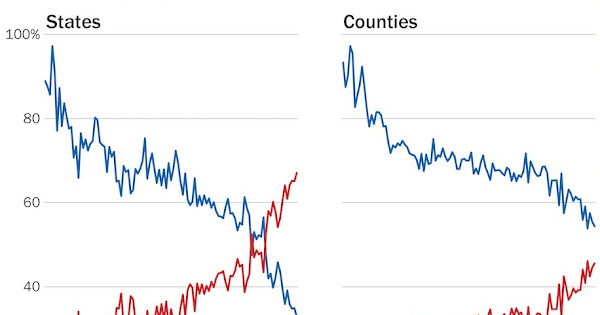 … which came from this WaPo article: After being centered in blue states, cases are now being added faster in red ones.

There’s also this map of current infection rates (my original cite was an article by NPR). It doesn’t correlate covid progress viz the 2016 election, but it doesn’t look good for the Trump-supporting South and heartland:

Perversely, some hardcore Trumpetistas may have wanted the peak to come and go quick and have us be in an inter-wave through by the time we got to November and then count on the attention-impaired base to listen to “well, sure, but now that the worst of that is over – do you want SOCIALISM on top of it?”

Another thing to keep in mind is that whether or people realize that Trumps actions are largely to blame, they still expect the president to at least acknowledge their pain. But Trump is not tempementally suited to even feign compassion. His only response to bad news under his administration is to deny its existence. The economy is the best ever! and the kung flu is just a sniffle. To people who are legitimately suffering this is going to feel like a slap in the face.

I don’t expect people to blame Trump for causing the problem. People often don’t care what caused a crisis; they just want it fixed, or they at least want someone to convince them that he’s in the process of fixing it.

Perception isn’t necessarily reality either. George H W Bush was actually presiding over economic recovery in his final half year before the election of 1992, but he came across as being someone who was distant and couldn’t relate to working class people. In 2012, a lot of people were still reeling from the financial crisis of 2008-9, but in the end, they believed Obama was in the process of doing something about their plight.

We know that a lot more people are going to be hurting economically and otherwise in November 2020 than they were in November 2016. It will come down to whether people believe Trump is doing anything to help the country. The numbers and data itself won’t necessarily matter. The pain has already been inflicted, damage done. What makes Trump vulnerable is that he’s an asshole. People thought his assholery was kind of amusing a year or two ago. I find it hard to believe that they’ll be nearly as amused now.

Trump isn’t finished yet. There’s still time for something we cannot foresee to bail his ass out, but he’s running out of time, and the chips are piling up against him higher and higher every day.