Trying to find the date of death for this individual

Can anyone help me find the date of the death of the individual in this find a grave entry? Everything I find online mentioned that he drowned in Antietam Creek in 1904, but I haven’t found the date of the incident. The entry seems to be taken from a newspaper, but I can’t find the original source.

“Mr. Will Rust, son of Mr. N. A. Rust, of Hagerstown, was drowned in Antietam Creek, near that city, on Saturday night about 10 o’clock.

Mr. Rust, accompanying a young lady, Miss Gladys Anna Bright, of the same city, to whom he had been paying special attention for the last six or seven years, left Hagerstown about 4 o’clock in the afternoon, for Funkstown, where he engaged a boat for a sail on the creek.

About 10 o’clock the young lady was heard to call Mr. Rust for help. The couple then had rowed some distance up stream. The searching party that went to their assistance found the boat empty and Mr. Rust’s coat floating on the water. The presumption is that the young lady fell out of the boat and young Rust attempted to rescue her and both were drowned. The water is some 15 or 18 feet deep at the place of the tragedy. The remains of the young man were brought to Luray on Tuesday and placed in the Jordon vault on the Luray College grounds. They were accompanied by his father, two brothers and one sister, all of whom are so well known in Luray.” 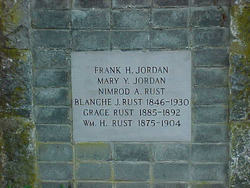 Mr. Will Rust, son of Mr. N. A. Rust, of Hagerstown, was drowned in Antietam Creek, near that city, on Saturday night about 10 o'clock. Mr. Rust, accompanying a young lady, Miss Gladys Anna Bright, of the same city, to whom he had been paying...

Cleaned up the C/P issues as best I could.

William H. Rust and his sweetheart, Miss Gladys Anne Bright, were drowned inn Antietam creek at Funkstown, about two and a half miles from Hagerstown last Saturday night at 10:15 o’clock.
They were rowing in a small boat which capsized. The body of the young lady was recovered shortly after midnight, and that of Mr. Rust at 8 o’clock Sunday morning. Separate inquests were held, and in each case tine coroner’s jury gave a verdict of accidental drowning.

The body of the girl was found by William Howard, and the body of Mr. Rust by Jacob Fisher. The bodies were near each other and near the place where they drowned. R. N. Flynn tonna Mr. Rust’s coat floating on the water about 200 yards down stream. In the pocket was Miss Bright’s purse, which, she had given him probably for safekeeping.

Albertus Bower testified that at 9.30 o’clock P. M., Mr. Rust and Miss Bright hired his boat, which is 14 feet long and 31 feet wide. The couple got in the boat and started up stream.
Charles Young testified that he heard a woman scream, “My God, Will, save tue !” He saw a white figure and heard the water splash. He hurried downstream to where Mr. Bower was and told him what he had heard. Mr. Bower got a lantern, rowed up stream and found his boat turned upside down, but neither Mr. Rust nor Miss Bright was anywhere to be seen.

Miss Bright was an attractive girl, 26 years old, arid an orphan. She lived with-her elder sister, Miss Mary Bright, on South Mulberry street, Hagerstown. She was a native of Oregon. Sim was the daughter of the late John D. and Virginia H. Bright, who moved to Hagerstown about 10 years ago from Virginia. The mother died about two years ago. Miss Gladys Bright was employed as forewoman in the Blue Ridge Knitting Mills, where Mr. Rust was also employed as a foreman in one of the departments. Mr. Rust had been paying attentions to Miss Bright for about seven years. She seemed to be deeply in love with him and he with her.

Mr. Rust was about 30 years old and the son pf Mr. and Mrs. Nimrod Ashby Rust, of Hagerstown. His parents went to Hagerstown from Luray, Va., about 10 years ago. They came from an old Virginia family, who, it is alleged, were opposed to Mr. Rust’s attachment to Miss Bright.

Mr. Rust’s parents were not notified of their son’s death until Sunday lemming. Both were greatly prostrated with grief.

ETA he’s buried in his family tomb in the backyard of our new house. We plan on hosting a Billy Rust party every year on the date.

And hers a pic of the back of the tomb. 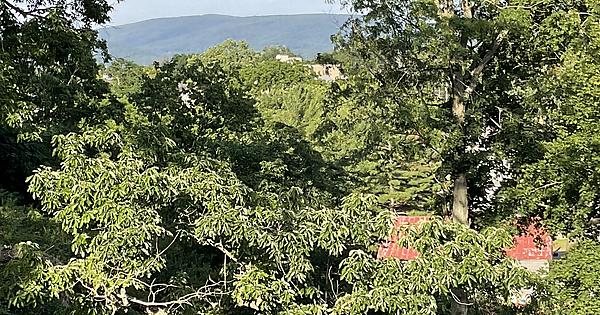 That is so cool! Just missed it this year, I guess.

Too bad Gladys isn’t there.

Miss Gladys Bright of Hagerstown, Md., sister of George E. Bright, of this city, was drowned on Saturday near her home, and a young man with her was also drowned. They were boating, and it is supposed the boat upset. The body of Miss Bright, aged 23, was brought to Staunton and buried Monday evening in Thornrose from the Bodley Auditorium, Rev. G. W. Stover conducting the funeral.

It would be nice, and not too late, to collect donations for boating safety with everyone coming to the party kicking in. Seem to be a drowning hotspot and makes their deaths a bit less meaningless.

Well, they drowned in Maryland a couple hundred miles away, their family tomb is in Luray, Va. We’re already hard at work at a cocktail in his honor, in that we are drinking on the deck overlooking his grave.

es away, their family tomb is in Luray, Va. We’re already hard at work at a cocktail in his honor, in that we are drinking on the deck overlooking his grave.

I didnt realise it was so far away.

I guess closer to a hundred miles.

GreysonCarlisle got the date of June 11 correct. I found the death index at the Maryland State Archives, it’s a massive document, and his record is on page 4605. I know Maryland put their death certificates online a couple of years ago, up to like 1910 or so, but I can’t find my link or find them right now.

Thanks again. I knew the Dope would have the answer in no time.