What are the downsides to universal mail-in ballots? I realize that no form of voting is problem free.

What is a universal mail in ballot? A one ballot used in all states for the presidential race only?

I want it for Federal elections. States would no longer be able to pull that one polling place in the whole county, 6 hour wait type bullshit. That DeJoy asshole would probably try to gum it up, but hopefully his days are numbered. If it was required of states also, that would be great.

What is a universal mail in ballot? A one ballot used in all states for the presidential race only?

Presumably it means every registered voter gets a mail-in ballot rather than having to request one - the term I’ve heard is “automatic mail-in ballots.”

In some states, mail-in ballots not only have to be requested, but you also have to prove that you have a ‘valid’ reason to vote by mail.

It’s the only way to vote in Washington.

I don’t know if there are any. The only ‘downside’ is that voter turnout goes up, which is why some people are opposed to them.

I don’t know if there are any. The only ‘downside’ is that voter turnout goes up,

Surprisingly, it doesn’t go up as much as you’d think. I don’t have the numbers, but as I recall, states with universal mail in ballots don’t have much higher turnout numbers.
But, it’s cheaper and easier. I think I posted here in the past that even the Republicans in Washington support this system, but then someone found a couple that don’t like it.
In general, though, there is very little resistance.

It’s a ‘problem’ in that it allows voters to make choices, rather than voting a straight ticket. Here in Colorado, it’s all mail in all the time (yes you can go in person, but why?). I love it because we tend to have a metric ton of votable issues, and being able to research each from my computer as I’m voting makes for a better vote - the booklets on each issue are a misleading summary at best sadly.

These problems are fixable, certainly.

I like mail in voting, and in my own experience, the township clerk called me in to verify my signature, which I thought was silly. But I can’t imagine that every clerk everywhere will be so vigilant. There are holes.

I support mail in voting, but not necessarily universal mail in voting, unless we have some type of linkage to state managed voter identification systems or some other means to mitigate the two glaring and obvious concerns that I mentioned. Too many people think that this is bad for poor people, but you know what? Mexico does it, and it’s mostly poor people.

I’m not saying these are problems, but I could see them possibly causing problems.

Not saying that the problems are insurmountable, just that they’re things you’d have to think about.

I’ll address issues 1 and 3.
Washington, perhaps others, has no voting in person. Every voter gets one ballot. Mail it in or drop it off.

You can track your ballot on line and confirm it’s been received and is going to be counted.

On issue two, I suppose that could happen if you’re willing to commit a crime to 1) obtain someone else’s ballot, 2) vote for them, and 3) do a reasonable forgery of their signature. I have a hard time believing this would be widespread, for a number of reasons (including that it would have a very small effect on any particular election)

One minor disadvantage of mail-in voting is you don’t get that civic, social experience of seeing and meeting others from your town at the grade school gym.

Again, here in Colorado, we have universal mail, although voting in person is still allowed. For your first first and last point, you get a tracking # and can verify the vote has been recorded. For the first, if you try to vote in person after submitting a mail in ballot it flags the system, and the clerk forwards it for fraud investigation. As for the second, yeah, there are always potential criminals, so there is on-line means to verify if your ballot has been mailed (and request a duplicate if not received), counted, and the like. For that matter, around the 2020 election, many of us in . . . partisan . . . communities, were concerned that people would take ballots out of mailboxes, and generally chose to use secure dropboxes instead.

Let’s be honest, no system is perfect, and the fact that a large portion of the country is trying to restrict voting options after zero evidence of substantial fraud (and very minor fraud has always been a known issue), means that our contract of social faith is pretty badly broken. There are plenty of ways to postulate fraud, both present and future, but the current measures being taken are blatantly flying in the face of facts and are generally so obviously biased (while claiming to be ‘fair’, such as Texas giving only one ballot area per county in utter disregard to population) that it cannot be seen as anything BUT voter suppression.

For some of the FAQ on Mail in Voting in CO (using my state as an example) here’s a link, it may answer other ‘What if?’ Questions. 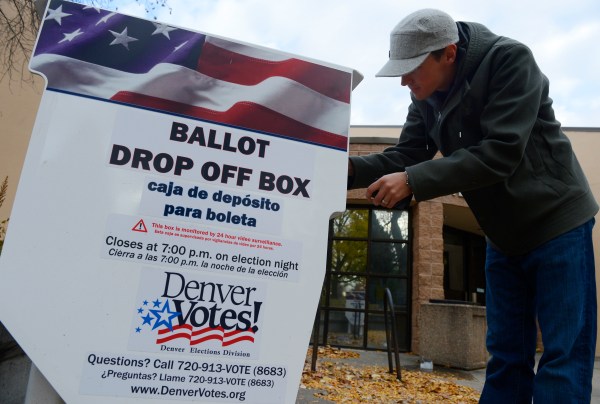 Voters and potential voters will have questions about how voter registration works, how mail-in ballots work, how ballots are counted and more.

Really, none of you can see a problem with ballots being sent by mail, in totally uncontrolled (by election officials) fashion? There is no chain of custody. Any random mail worker could toss a ballot in the garbage. An activist could throw out ballots from a heavily Republican or Democrat precinct.

Mailing out ballots universally when only about 60% of eligible voters vote means 40% of the ballots will wind up in garbages, where they could be harvested and used to fake a vote. An activist mailman could simply hold on to the ballots and pass off blocks of them for fake voting. And disreputable activists on both sides could offer ‘pay-to-vote’ schemes. Vote harvesting becomes much easier.

Mail in voting is a really bad idea that should only be offered to people on request for a valid reason like infirmity, and should carry a bunch of extra checks such as mandatory signature verification and random sampling after the election to mke sure the peoole who voted are who they say they were.

There is no chain of custody, Any random mail worker could toss a ballot in the garbage. An activist could throw out any ballot from a heavily Republican or Democrat precinct.

There is absolutely a chain of custody.

First, you register to vote, so the county knows you’re eligible to vote.

Second, as has been pointed out, voters can (and do!) check to ensure their ballot was received.

Third, local elections workers know who usually votes in elections. If there is an anomaly in votes received/not received, hand recounts will suss out the problem.

Fourth, paper ballots ensure there can be hand recounts. I am suspicious of any precinct that fights against them.

Mailing out ballots universally when only about 60% of eligible voters vote means 40% of the ballots will wind up in garbages, where they could be harvested and used to fake a vote.

If I don’t receive my ballot, I will contact my election official and ask them to send me another one. If the election officials get lots of reports that people aren’t receiving their ballots, do you imagine they won’t investigate?

I’m aware of one vote harvesting case that was caught, tried and convicted in North Carolina. Are you aware of others?

Funny; we accept them here in Oregon every time. And we have very little voter fraud such as you describe.

Mail in voting is a really bad idea that should only be offered to people on request for a valid reason like infirmity, and should carry a bunch of extra checks such as mandatory signature verification and random sampling after the election to mke sure the peoole who voted are who they say they were.

Both of the above-described measures are taken in Oregon and other states with mail-in voting. Mail-in voting wasn’t invented yesterday. We know how to do it, and most precincts in most states know how to run elections properly.

You can vote in multiple locations (no one keeps good records of where you currently reside and where you’re entitled to vote).

If nobody is keeping this sort of record, then you could pull the exact same thing with in-person voting. The solution to this is not to require in-person voting; it’s to keep records of what voters are where. Which, so far as I know, every state in fact does.

Washington has had several very close elections since we went to all mail-in voting.
Ironically, it was in response to a close election that this “reform” was instituted.

Washington State Has Years of Experience with Mail-in Ballots

President Trump continues to attack the vote-by-mail system, claiming it will increase fraud, but Washington state’s mail-in program that has worked well for years might be a perfect counterexample.

where they could be harvested and used to fake a vote

How can they do that? Do they also know how all the signatures for all the voters look?

What, you say? There’s no way they check all those signatures? Well, NJ went all mail-in in 2020. My daughter was contacted by the election officials because her signature didn’t match what was on her initial registration. She registered when she was 18 and her signature changed sufficiently since then that it bounced.

She had to provide proof it was hers.

Anyway, can you provide some cites that all mail-in voting has led to voter fraud? Several states in the US have had it for years.